The best 70€ I ever spent: An old German sideboard 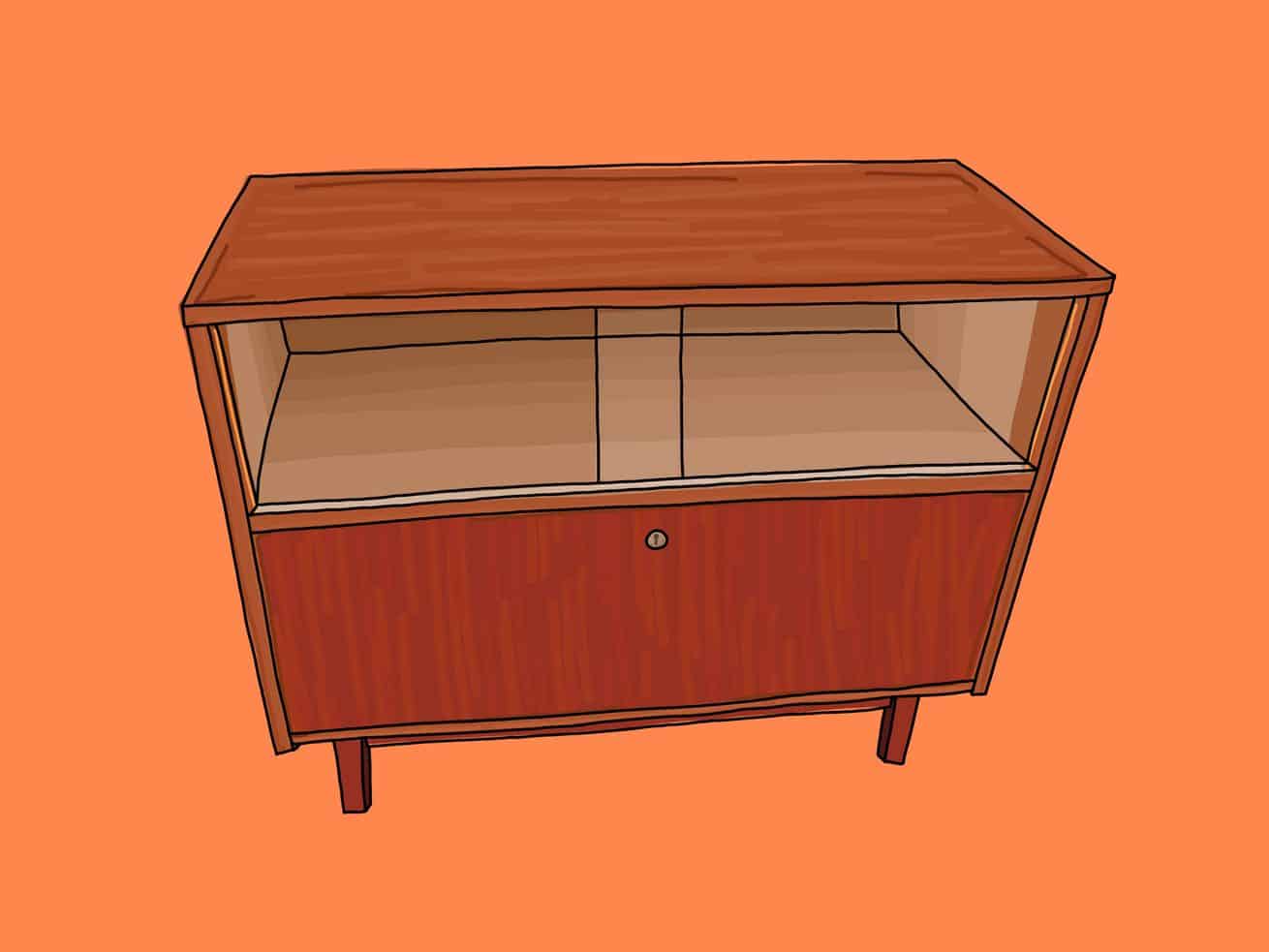 After an adulthood spent moving around, I decided it was finally time to make an apartment a home.

Over my first two years in Berlin, I moved house seven times and never owned a bed. Buying furniture takes time, money, or both, I reasoned, and moving with furniture is even more work. Instead, I hailed standard yellow cabs to shuttle me between sublets with my possessions in boxes, bags, and suitcases. It seldom took more than one trip.

Like many people, I find it easier to leave than to ever settle down. I believe it’s a form of pragmatism. In my early 20s, I made too little money to have long-term plans. I found myself at the mercy of landlords, bureaucrats, and employers who made it clear that any contracts and permits I received were acts of profound charity. I spent these years listless, and ready to leave if or when I was told to. I refused to buy furniture because it was more convenient to inherit what others left behind, because someone was always leaving something behind, which meant that I could do the same without thinking about where it came from, or where it was going.

Instead, I nursed a found collection of IKEA bookshelves and cheap wardrobes alongside the detritus from my day-to-day life that lined my suitcases. I honored my bric-a-brac as sentimental and my furniture as functional until it all became too unbearable or illogical to carry it with me. Last summer — my seventh in Berlin — I gave away so much of what I owned that when I most recently moved house, it took the movers under an hour to gather everything I had and bring it to my new apartment, where I have lived alone since last July, and where I intend to stay for as long as I can.

The night that I moved in, I could hear bar hoppers making the most of the summer evening in the distance. My thoughts turned to the stack of boxes that were still piled up in the next room where I’d abandoned them for a Zoom call shortly after I arrived that morning. As I nodded off, I caught myself apologizing for leaving my things everywhere. With no one to inconvenience, I let go as the sound of the streets pushed me deeper and deeper asleep instead. When I woke up, I dumped every box out on the living room floor and broke them all down, then frogmarched them to the recycling bin.

Now in lockdown, to fill the nameless, anxious void that spans between working and sleeping, I search for second-hand furniture online. It started out of necessity: I surveyed the apartment when I signed the lease, and noted which pieces of furniture would be temporarily loaned to me. Then, I made a list of the things that I would be most devastated to live without. I had brought a bookshelf, a sofa, a desk, a chair, and a clothing rack with me; I decided that replacing the trash cans could wait, and that I didn’t need any more lamps for now. I also conceded it was time to give up the bit: After seven years in Berlin, I finally bought my own bed.

Something had changed: This space is mine, I decided with conviction. I wasn’t going to leave. I bought two matching chests of drawers from the 1960s, in which I could decant my suitcases. And I bought a ’70s bar cart next, which now only holds a dish of candles and a splinter of sandalwood. I put an offer in on a narrow highboard from the ’50s that had just enough storage space for a few binders or files, but it was already spoken for.

On my favorite second-hand furniture sites, the search function is limited, ranking posts only by time published, distance from your area code, and price. Sometimes, you can explore categories and subcategories, but the overlap between disparate branches in the same taxonomic tree is not intuitive to navigate — is a vintage flowerpot an antique (Hobby), an interior decoration (Furniture), or a garden accessory (Garden and Pets)?

Six times a day, I run through a list of search terms that sort furniture by form (sideboard), by function (cabinet), by age (’70s), by taste (mid-century modern), and by the owner’s sales pitch (high-quality). I learned a new language for furniture — one that describes its features, its history, and how people understand it. There are no fewer than 12 words in German for a small pedestal on which you can stand a plant, so I learned all of them, and four common misspellings. I hold deep, almost prejudicial beliefs about how much a kitchen table should cost, despite having never shopped for one. I can clock sellers with a penchant for gouging prices by their VSCO filters alone.

My searches follow me, with targeted advertisements blooming across my Facebook and Instagram feeds. One appeals to my values with a bamboo TV console, prioritizing its sustainability over any details on its price, size, or what makes it sustainable. Another ad appeals to my taste, selling designer hairpin legs that upgrade flatpack furniture into thoughtful, considered homeware.

Some people might confuse my labored, inefficient searching for a daily meditation, or a deliberate form of resistance against the attention economy in which competing vendors anticipate my desires to offer something that I might want, or something I should want, or both. This is not the case.

My hunts are furious, and cathartic. I scroll angrily until I reach the timestamp where I last ended. I am powered by adrenaline and cortisol, playing a game of chance, of timing, of instinct, and of last-minute planning that seems so foreign and distanced from the life I’ve lived since the start of the pandemic. Against the backdrop of the last year of restless, aching sanctions, I can understand why someone would bet their life savings on the word of Reddit prophecies because regardless of the outcome, it is a choice that they can say they made, and a decision that was their own. If I see furniture I want, I find a way to make it mine.

If I see furniture I want, I find a way to make it mine

On a Sunday morning, in a lull during an otherwise work-heavy weekend, I came across a gorgeous East German sideboard from 1970 with glass windows to show off stemware that I don’t own. I acted before thinking, and showed up two hours later with a moving trolley and belt that were comically undersized for the sideboard’s breadth and depth.

As the owners helped me load it into the elevator in their well-groomed new-build apartment complex, they told me how much they’d loved the sideboard, and how sad they were to part with it, but their first child was on the way and needed the space. They were happy, they said, to see it was going somewhere it would be well tended to.

They offered me a ride home, but their car doors had frozen shut, and I really couldn’t ask them to go so far out of their way for me, a stranger. So I handed over 70€ in cash and stood outside their apartment in the ice and the snow with my sideboard. I called every number in my phone until I made it back to my apartment thirty minutes later with the sideboard in tow. Upon my return, I stood in the hallway, eyeing it and necking a bottle of water as the adrenaline left my body. Then, I returned to my desk and went back to work.

Sometimes, I find furniture that I don’t buy because it’s too big, too ostentatious, too close to what I own, or too far from my apartment. I post this furniture on Twitter in hopes that someone else can see what I see in it. Recently, two friends sent me a picture of a cupboard in their bedroom. It’s their first home together, and the cupboard is one of the many things I found in my searches that will remain with others even if I choose to leave.

As I cycled through commonly misspelled search terms, I came across two blumenständer that had been mislabelled. They went to an author I’ve never met and a week later, I received a copy of her first book in the mail in return. So many people chased a glass table that I found that when it resurfaced a week later on one of my favorite sites, it was 100 euro more. Its owner hadn’t seen its worth until other people did first.

Nathan Ma is a Berlin-based writer and critic for the Believer, the Baffler, and other outlets.