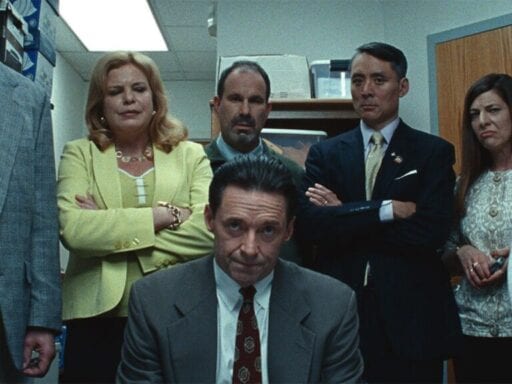 The premise: Two administrators in a Long Island school district are devoted to their work — but what they’re doing behind closed doors is what really matters.

What it’s about: Bad Education was one of the surprise delights of 2019’s prestigious Toronto International Film Festival, a real-life tale of intrigue and larceny in the most drab of locations: a Long Island public school district.

Based on a true story from the early aughts and directed by Cory Finley (Thoroughbreds), the film stars Hugh Jackman as Frank Tassone, superintendent of the Roslyn school district on Long Island — then the fourth-best school district in the state of New York. Tassone is beloved by parents, students, faculty, and administrators alike. He’s undeniably devoted to his work and the many families who depend on the school district to provide their children with an excellent education.

One day, however, thanks in part to reporting by a student journalist (Geraldine Viswanathan), the district discovers that the assistant superintendent for business, Pam Gluckin (Allison Janney), has been embezzling millions of taxpayer dollars for years. Soon the noose starts to tighten around Frank’s neck, too — and there’s a lot he wants to keep hidden.

Bad Education serves up stellar performances from Jackman and Janney, both of whom seem trapped in hells of their own devising, suspended between a desire to serve the community and the feeling that their labor is underappreciated. But where the film really sings — aside from its often darkly funny writing and surprisingly thrilling take on what could have been a dull bureaucratic scandal — is in tracing the effects of the pressures placed on administrators and faculty. That college admissions matter so much that parents are willing to commit fraud to get their kids into good schools is no secret.

It’s not just parents who care; after all, as Frank is reminded repeatedly, good school districts mean higher property values, which in turn lead to a more affluent community. A complex set of factors (along with some good old-fashioned theft) lead to scandals like the one in Bad Education. And it’s unlikely to be the last.

Critical consensus: Bad Education earned favorable reviews from critics when it premiered at the Toronto International Film Festival in 2019. “Bad Education is a story of small-town villains who just can’t help themselves, and it’s fun to see how their own carelessness trips them up,” writes Stephanie Zacharek at Time. “These are people we can’t trust, played by actors we trust implicitly. Why not be flimflammed by the best?”

How to watch it: Bad Education premieres on HBO at 8 pm on Saturday, April 25, after which it will stream for subscribers on HBO Now and HBO Go.