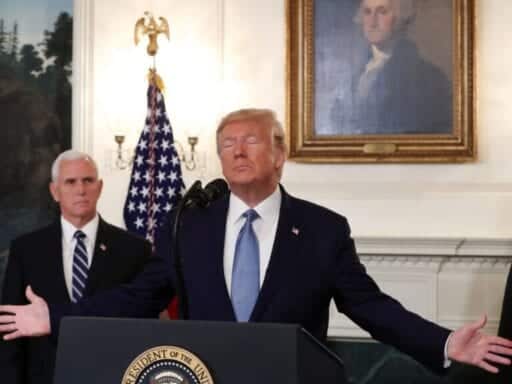 Questions and conspiracies about potential insider trading going on around President Donald Trump’s market-moving policy decisions aren’t new, but they’ve recently gained extra momentum thanks to a Vanity Fair story. So much so that some Democratic lawmakers are calling for regulators to look into what’s going on. But the issue isn’t so clear-cut; many financial experts and Wall Street observers say there’s nothing to see there at all.

Here’s what’s happening: On October 16, Vanity Fair published an article by William Cohan suggesting a mysterious group of unidentified futures traders have made billions of dollars off of some conspicuously timed trades made just ahead of some major political developments. The story quotes an unnamed trader on the Chicago Mercantile Exchange, where the fishy deals are alleged to have taken place, declaring that there is “definite hanky-panky going on.” Cohan published a similar story in July about investors wondering whether there was some inside information being passed around related to Trump.

While the summertime story didn’t make many waves, this latest one has. Critics say the allegations made in Cohan’s articles don’t make sense: The trades he’s flagging aren’t particularly notable, they argue, and these are just unfounded conspiracies. The CME has denied the article’s claims as “patently false.”

Meanwhile, some Democrats in the House of Representatives and Senate are pushing government regulators to look into what’s going on, calling the traders’ allegations “troubling” and demanding an investigation into “whether any rules, laws, or regulations were violated” by investors with inside knowledge from the Trump administration.

Cohan, the article’s author, is pushing back against the criticism. He says he was just reporting what his sources told him, and at the very least, regulators should take a peek behind the curtain to see who is behind the trades. “I’m surprised at how controversial this became, or seems to be becoming,” Cohan told me. “This is what reporters do. We should want to raise issues where there’s smoke and see if there’s fire.”

The Vanity Fair article and the pushback, briefly explained

Cohen’s October article on the “fantastically profitable mystery of the Trump chaos trades” lays out observations made by some traders on the Chicago Mercantile Exchange, a derivatives market for futures and options trading, about a handful of transactions in S&P 500 e-mini futures — electronically traded futures contracts that track the S&P 500 index and sort of seek to predict where it’s headed. For example, it notes that someone bought 420,000 e-minis on June 28, before Trump announced trade talks with China were “back on track,” and potentially made $1.8 billion. Or on September 13, someone shorted 12,000 e-minis (meaning they essentially bet the market would go down), before a drone strike on two Saudi Arabian oil installations, and made $180 million off of the deal.

Cohan wrote that transactions such as these had sparked speculation among CME traders that something was afoul:

Are the people behind these trades incredibly lucky, or do they have access to information that other people don’t have about, say, Trump’s or Beijing’s latest thinking on the trade war or any other of a number of ways that Trump is able to move the markets through his tweeting or slips of the tongue? Essentially, do they have inside information?

The story didn’t outright declare that there was certainly a problem, but it called on regulators to find out. Cohan says that the SEC declined to comment on his story, though someone from within the commission reached out to him to ask him about the trades he was referencing, and the CFTC ignored his calls. The SEC declined to comment for this story and did not respond to a question about any outreach to Cohan.

Among many Wall Street analysts, market experts, and observers, the Vanity Fair article raised some eyebrows, and many people panned it as wildly speculative and off-base.

Bloomberg ran a story about analysts’ skepticism of the Vanity Fair story. One market strategist told the publication that without trading records, “you can’t tie one and one together to make two the way this story is laid out.” Another noted that while the story looked at a handful of times where someone got these trades right, there are a ton of times where people get these trades wrong, and “volume spikes happen all the time.”

Felix Salmon in Slate laid out a lengthy critique:

Salmon also pointed out the trader quoted in the Vanity Fair story appears to believe a debunked conspiracy theory that al-Qaeda “cashed in” before the September 11 attacks. The 9/11 Commission report found that while some unusual trading had occurred, each trade had an “innocuous explanation.”

Cohan emphasized that he was just reporting what sources he trusts were telling him. “To me, this is what journalism is all about,” he said.

While Cohan’s July story was met with a yawn, this October one was not — and some lawmakers are asking questions.

Last week, Reps. Ted Lieu (D-CA) and Kathleen Rice (D-NY) sent letters to the Securities and Exchange Commission, the Commodity Futures Trading Commission, and the FBI asking them to investigate “potentially unlawful behavior related to the trading of electronically traded futures contracts” on the CME in the last several months, citing the Vanity Fair report. “While the aforementioned trades may be purely coincidental, their timing and scale raise serious suspicions about whether the traders received material nonpublic information that would affect the S&P and how they received such information,” they wrote.

Then on Monday, Sens. Jack Reed (D-RI), Debbie Stabenow (D-MI), and Sherrod Brown (D-OH) sent a letter to the SEC, CFTC, FBI, and Department of Justice calling for a probe. A total of 15 senators have signed on, including 2020 presidential candidate Sen. Amy Klobuchar (D-MN) and Sen. Tammy Baldwin (D-WI), who tweeted out that the Vanity Fair story was “disturbing.”

I’ve joined my colleagues to ask for an investigation of whether any rules, laws, or regulations were violated. If any wrongdoing is uncovered, we should swiftly hold violators accountable to the fullest extent possible. pic.twitter.com/VIsb7vTCg8

“The professional traders of e-minis, they see anomalies in the market that seem to be well-timed. Is there anything to them? They tell me about them. I reported it, and fortunately, these senators and these two congressmen called for these investigations, which is exactly what should happen,” Cohan said. “Nothing would be make me happier, frankly, than there would be nothing to this.”

Just because something looks fishy doesn’t mean it is

It’s true that Trump has the ability to move markets, and it’s not outlandish to wonder whether he or people in his orbit are trading around insider information or tipping off their friends. And it’s true that regulators, overall, could do a lot better when it comes to insider trading across the board. Insider trading and white-collar crime in general are broadly under-prosecuted in the United States.

But just because something seems like it could potentially be off doesn’t mean it is, and a lot of Trump’s critics want to see fire everywhere, even when sometimes it’s just smoke.

Early in Trump’s presidency, he was a net positive for the stock market: Wall Street was excited about the tax cuts and deregulation his White House tenure promised and it ignored a lot of the chaos. But in recent months, the Trump whiplash has become harder to shake off for investors, especially in light of Trump’s trade war with China and his public criticism of the Federal Reserve.

In September, JPMorgan rolled out its “Volfefe Index,” a callback to the president’s infamous “covfefe” tweet, that tracks the effects of Trump’s tweets. It found that when Trump tweets using the words “China,” “billion,” “products,” “democrats,” and “great,” the market tends to react.

Trump has gotten into hot water before — or at least as much as he can — for tipping his hand on information that might affect the stock market. In June, he tweeted about the May jobs report before it came out and suggested positive news — generally a no-no.

Looking forward to seeing the employment numbers at 8:30 this morning.

People in the president’s inner circle have been hit with insider trading allegations as well. Former Rep. Chris Collins (R-NY), Trump’s first congressional endorser, resigned from the House after being charged with insider trading and pleaded guilty in the case in October. Democratic senators have pressed for regulators to look into potential insider trading by Commerce Secretary Wilbur Ross. And Trump, his family, and his allies have shown few qualms about profiting off of his presidency.

That’s why when stories like this Vanity Fair one take off, it’s so easy for Trump’s critics to believe. He seems so eager to bend and break the rules elsewhere, why not here? But the market is notoriously hard to time and its reaction is often difficult to predict. Maybe there is some information-trading going on, but what you need is evidence — not a feeling that it is.

“I had been wondering how long it would take someone to misuse the futures market data and claim there has been trading with inside political information. Frankly, I’m a little disappointed it look this long,” said Nick Colas, co-founder of market insight firm Datatrek Research, in an email. “I suppose all the fuss about this will force regulators to check it out. The odds of anything coming back are really low.”

The Boston Marathon bomber’s death sentence has been overturned
Elif Batuman on why you should never be embarrassed about anything
The Kyle Kashuv-Harvard controversy, explained
Trump’s daily coronavirus press briefings are becoming TV clip shows
The sanctification — and sanitization — of Martin Luther King Jr.
What the leaked IRS memo does and doesn’t say about the Trump tax returns controversy