The chaotic delay of the Ohio primary, explained 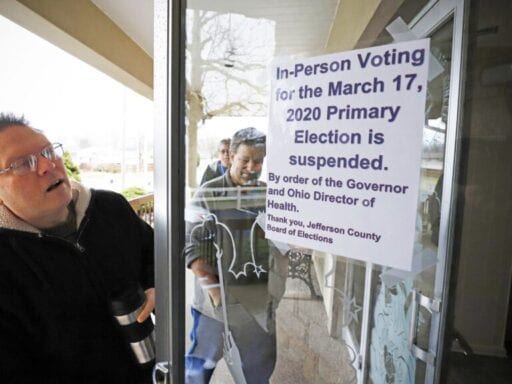 Share
Loading...
Polling stations throughout Ohio were shut down on March 17, 2020, as Gov. Mike DeWine called for the state’s primary to be pushed back to June. | Gene J. Puskar/AP

The state is no longer voting in person on Tuesday, March 17.

After a tumultuous 24 hours, the Ohio primary is officially delayed.

Early Tuesday morning — shortly before polls were originally set to open — a panel of four Ohio Supreme Court judges voted unanimously to effectively back the state’s efforts to close its polls. The decision followed a chaotic back-and-forth between Gov. Mike DeWine and a court in Ohio’s Franklin County on Monday, which raised questions over whether the governor had overstepped the limits of his office in his attempts to postpone the primary.

Ohio’s last-minute decision to shutter its polls is the latest in a series of steps that states are taking to respond to the coronavirus crisis amid the presidential primary. Georgia, Louisiana, and Kentucky are among the states that have also delayed their primaries. The other states that were scheduled to vote this week — Arizona, Illinois, and Florida — have opted to move forward with their in-person elections, something DeWine said he felt was not an option. As of March, there were 50 confirmed cases of coronavirus in Ohio.

“During this time when we face an unprecedented public health crisis, to conduct an election tomorrow would force poll workers and voters to place themselves at an unacceptable health risk of contracting coronavirus,” DeWine tweeted Monday.

DeWine and other state officials have said their decision to delay the primary, while last-minute and somewhat chaotic, was driven by guidance from the Centers for Disease Control and Prevention, which has urged people to avoid gatherings of 50 or more people as the coronavirus continues to spread. But while DeWine was eventually successful in closing the polls Tuesday, the manner in which he went about complying with that guidance has led to some pushback — and more than one lawsuit.

Ohio’s decision to delay its primary is in line with that of several other states, given the public health guidance about the coronavirus. The last-minute nature of the decision, however, has been the subject of some criticism.

“If you were going to postpone the election, it would have been much more preferable to do it on Thursday or Friday of last week,” said Daniel Tokaji, a professor at Ohio State University’s Moritz College of Law.

DeWine has noted, however, that the last-minute nature of the decision was tied to the drastic changes in federal guidance that have taken place over the last 72 hours.

“It is clear that tomorrow’s in-person voting does not conform and cannot conform with these CDC guidelines,” DeWine said Monday. Those guidelines were not issued until Sunday, and the White House’s recommendation that gatherings be limited to no more than 10 people was issued Monday evening.

The following is a brief overview of the steps that DeWine and Ohio courts have taken to lead up to where we are now:

The chaos in Ohio has caused some confusion among both voters and poll workers. According to University of Dayton political science professors Nancy Martorano Miller and Christopher Devine, poll workers received competing messages about whether to stay home after DeWine’s Monday press conference and Frye’s decision, which was issued later that night.

“It was a communication debacle, a little bit, especially for poll workers,” says Martorano Miller.

On Tuesday, there were anecdotal reports of voters and workers showing up to the polls because they still thought the primary was taking place. Many polling stations, however, had signage informing people about the last-minute changes.

As of the latest directive from LaRose, in-person voting for the Ohio primary is now scheduled for June 2. Those interested in voting absentee via mail will be able to submit ballots up until that date.

But Ohio University’s Edward Foley tells Vox it’s possible that the state legislature will challenge this directive, potentially changing the primary’s date, by passing their own measure. If they don’t, LaRose’s decision would stand, though he indicated Tuesday that there could be lawsuits challenging the state’s efforts to postpone voting. “I’m sure somewhere in Ohio there are people standing at a clerk’s counter, in a courtroom, filing something as we speak,” he told reporters Tuesday.

Given DeWine’s decision to support an order issuing a public health emergency after Franklin County Court’s statement, questions have also been raised about whether the governor was going against the judge’s decision and imposing on the role of the judiciary. Foley doesn’t think this was the case: He notes that the judge had rejected the claim of the private plaintiffs, but never explicitly ordered the state to move forward with the primary. The final decision in this case is still being appealed.

For now, the state isn’t expected to release any results Tuesday. Instead, it’s set to treat the results as if the primary is ongoing and post them in June.

“Something like the pause button has been pushed with respect to the Ohio primary,” said Foley.

How to drive fossil fuels out of the US economy, quickly
Bill Barr’s Justice Department swings into action to undercut the inspector general report
The Walking Dead begins season 9 with an uncertain future — and a new sense of purpose
No one expected The Athletic could get people to pay for sports news. Now it has 600,000 subscribers...
Trump’s impeachment trial brief constructs an alternative reality of January 6
Kamala Harris says she’d pardon low-level drug offenders if elected president