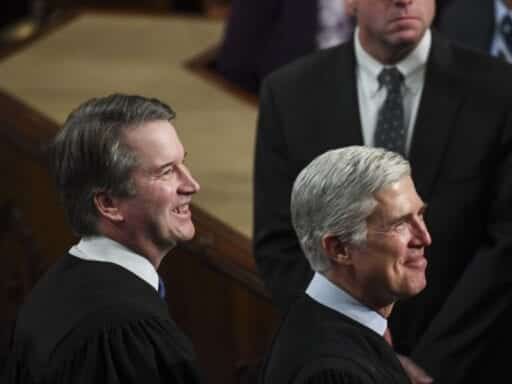 Share
Loading...
Justice Brett M. Kavanaugh, left, and Justice Neil M. Gorsuch ahead of the State of the Union address before members of Congress in the House chamber of the U.S. Capitol February 5, 2019 in Washington, DC. | Photo by Toni L. Sandys/The Washington Post via Getty Images

There probably isn’t much doubt how Mathena v. Malvo, a case the Supreme Court will hear on Wednesday, will wind up being resolved.

The “Malvo” in this case is Lee Boyd Malvo, one half of the infamous pair of serial killers who terrorized the Washington, DC area with a sniper rampage in 2002. He was 17 at the time of the rampage, and he claims that the sentencing courts did not follow the proper process for condemning a juvenile offender to life without parole — though it’s doubtful that a majority of the Court will agree with him.

Several of the justices lived in the DC area during the three-week period when residents were scared to go outside for fear that they would be killed by Malvo and his partner, John Allen Muhammad. Malvo’s legal arguments rest on a fairly aggressive reading of a 2012 Supreme Court decision that split the Court 5-4. Notably, former Justice Anthony Kennedy cast the key fifth vote in that decision.

But even in the likely event that Malvo loses, it matters a great deal how Malvo loses. Malvo claims that he was sentenced in violation of the Eighth Amendment’s prohibition on “cruel and unusual punishments.” And the Supreme Court signaled just a few months ago that it wants to dramatically roll back the scope of that amendment.

Last April, in Bucklew v. Precythe, the Supreme Court signaled that it plans a wholesale rethinking of how it understands the Eighth Amendment. Malvo is the Court’s first Eighth Amendment case since Bucklew, so it could offer a window into just how deeply the Court’s Republican majority plans to cut into the shield against bizarre and excessive punishments.

Malvo could prove to be a fairly minor case, which simply states that the Court will not apply its 2012 decision in Miller v. Alabama — which held that “the Eighth Amendment forbids a sentencing scheme that mandates life in prison without possibility of parole for juvenile offenders” — in the specific way that Malvo seeks. In theory, the case could also end in a victory for Malvo, although that outcome seems unlikely.

What makes this case significant, however, is that it could be the second phase of the doctrinal revolution that the Court began in Bucklew — and it could signal that criminal defendants enjoy far fewer protections against cruel and unusual punishments than they do under existing law.

The Eighth Amendment’s decay began four years ago, as part of an effort to save the death penalty

The case involved Russell Bucklew, a death row inmate with cavernous hemangioma, a disease “which causes vascular tumors — clumps of blood vessels — to grow in his head, neck, and throat.” Bucklew feared that the lethal dose of barbiturates the state of Missouri planned to give him at his execution would cause him to choke on his own tumors, leading to extreme pain and suffering in his final minutes.

In effect, Bucklew’s claim was that the Eighth Amendment did not allow him to be tortured to death.

Realistically, Bucklew’s case was doomed long before it arrived at the Supreme Court. In Glossip v. Gross (2015), a 5-4 Court held that the death penalty enjoys a kind of super-legal status. In the lead up to Glossip, several manufacturers of drugs commonly used in executions refused to sell them to states that intended to use them to kill someone. Some of those states responded by using painkillers of dubious reliability to execute prisoners. As Justice Elena Kagan warned in her Glossip dissent, the drug cocktails used by these states could cause people to experience “the feeling of being burned alive” during their execution.

And yet all five of the Court’s Republican appointees, including Kennedy, joined an opinion by Justice Samuel Alito that suggested that the death penalty must be defended against drug companies that seek to undercut it. “Because it is settled that capital punishment is constitutional,” Alito wrote, “‘[i]t necessarily follows that there must be a [constitutional] means of carrying it out.’”

If an inmate believed that a particular method would be painful, or even torturous, the burden was on that inmate to propose a different method of execution that would cause less pain.

Glossip, however, did not provide much of a theoretical framework to justify its result. It largely began with the premise that the death penalty must be allowed, and then reasoned from that conclusion. Bucklew, which was decided after Kennedy left the Court, was the Court’s first attempt to put some doctrinal heft behind Glossip’s defense of executions. But the theory of the Eighth Amendment articulated in Bucklew is at odds with decades of settled law.

Recall that the Eighth Amendment prohibits “cruel and unusual” punishments. In a seminal 1958 opinion, Chief Justice Earl Warren argued that the amendment bans punishments that defy “evolving standards of decency that mark the progress of a maturing society.” Thus, as a particular form of punishment grows more and more “unusual,” it grows more and more constitutionally suspect.

If taken seriously, Warren’s framework is an existential threat to the death penalty itself. As the Death Penalty Information Center chronicles, both new death sentences and actual executions are disappearing in most of the country.

Only eight states conducted executions in 2018, with Texas accounting for more than half (13) of the 25 total executions.

Rather than follow Warren’s reasoning to its end point, Justice Neil Gorsuch’s majority opinion in Bucklew simply ignores the “evolving standards of decency” framework altogether. Instead, Gorsuch suggests that the scope of the Eighth Amendment was defined in the eighteenth century and that it may never change.

“Death was ‘the standard penalty for all serious crimes’ at the time of the founding,” Gorsuch writes. “Nor did the later addition of the Eighth Amendment outlaw the practice. On the contrary — the Fifth Amendment, added to the Constitution at the same time as the Eighth, expressly contemplates that a defendant may be tried for a ‘capital’ crime and ‘deprived of life’ as a penalty, so long as proper procedures are followed.”

Gorsuch does list some methods of execution — “dragging the prisoner to the place of execution, disemboweling, quartering, public dissection, and burning alive” — that do violate the Eighth Amendment. But what sets these punishments aside is the fact that “by the time of the founding, these methods had long fallen out of use and so had become ‘unusual.’”

Bucklew did not explicitly overrule the “evolving standards of decency” test, but it is impossible to square Gorsuch’s framework with Warren’s. Warren read the Eighth Amendment as a restriction on punishments that are “unusual” at the time when they are imposed, but Gorsuch reads the amendment to only ban punishments that were “unusual” in 1791.

The open question is how far Bucklew will go

If the Court follows Gorsuch’s new test to its logical extreme, the consequences would be quite dire for criminal defendants. Though Kennedy joined Alito’s opinion in Glossip, the former swing justice frequently voted with his liberal colleagues in cases asking whether especially harsh punishments could be applied to people that Kennedy believed to have diminished mental capacity.

Thus, in Atkins v. Virginia (2002), Kennedy joined an opinion holding that the death penalty could not be applied to intellectually disabled offenders. He reached a similar conclusion in Roper v. Simmons (2005), which held that the Constitution forbids “imposition of the death penalty on offenders who were under the age of 18 when their crimes were committed.” And, in Miller v. Alabama (2012), Kennedy joined a decision holding that “the Eighth Amendment forbids a sentencing scheme that mandates life in prison without possibility of parole for juvenile offenders.”

All three of these opinions, however, rested on the “evolving standards of decency” framework that the Court appeared to scrap in Bucklew. And thus, all of them could potentially be on the chopping block now that Kennedy is no longer around to protect them.

Which brings us back to Malvo. Malvo, who was 17 during his 2002 sniping rampage, argues for a broad reading of Miller. Under his reading of the decision, “Miller requires not only that sentencers be permitted to consider youth, but also that they actually do so, to determine whether life without parole is a proportionate sentence.” Thus, Malvo claims his sentence was invalid because the sentencing judge did not consider Malvo’s youth at the time of the offense.

The state, for its part, argues that Miller only forbids “mandatory” schemes that automatically apply a sentence of life without parole to certain juvenile offenders.

If Kennedy were still on the Court, Malvo’s argument might have a shot. But it is unlikely to prevail in the current Supreme Court. The best criminal justice reformers can realistically hope for is a decision rejecting Malvo’s reading of Miller and embracing the state’s.

Malvo, however, could go much further than that. It could potentially apply Bucklew’s new framework to overrule Miller itself. And it could cast other decisions like Atkins and Roper into grave doubt. Malvo, in other words, could tell us whether Bucklew was simply a one-off effort to come up with a doctrinal justification for the death penalty, or whether it was the beginning of a constitutional revolution.

And if the revolution is upon us, states could gain broad new powers to impose punishments that are now widely viewed as cruel and unusual. In a famous 1988 lecture, Justice Antonin Scalia suggested that “public flogging” was a permissible punishment at the time of the framing, though he labeled himself a “faint-hearted originalist” because he doubted that he would uphold an attempt to flog a criminal offender.

Indeed, it is doubtful that Gorsuch’s view of the Eighth Amendment would prevent such public inflictions of pain. Britain did not abolish “the punishment of whipping” until 1948, a fairly convincing sign that this punishment was acceptable to the former English colonists that founded the United States. The Delaware Supreme Court upheld statutes imposing “the penalty of lashes” as recently as 1963.

The Court already held, in Glossip and Bucklew, that an inmate may be tortured to death, at least in effect, if not necessarily in intent. The scope of the Eighth Amendment is now in the hands of judges who believe that such punishment is acceptable.

New York is the first state to cancel a presidential primary over coronavirus concerns
Why economic hardships finally sparked Iranian protests
Armed protesters entered Michigan’s state capitol during rally against stay-at-home order
The one thing Democrats can do to stop Trump from replacing Justice Ginsburg
What the remaining swing states would look like as a TV show
Hurricane Florence is costing workers income. Blame federal labor laws.