The damning simplicity of the Ukraine-Trump scandal 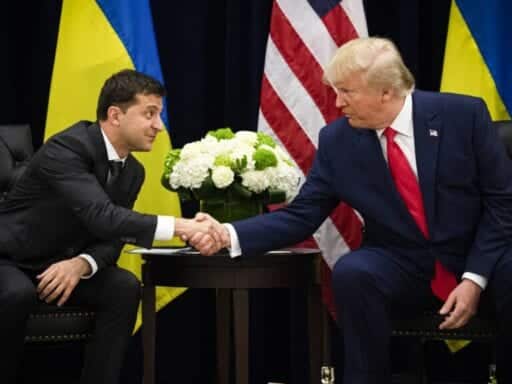 The conspiracy and the cover-up are in plain sight.

Despite investigating for two years and interviewing multiple witnesses, special counsel Robert Mueller was unable to establish that there was a conspiracy between Trump associates and the Russian government to interfere with the 2016 election.

But if Mueller’s team had had the kind of information we now have in the Ukraine case, his job might have been a lot easier — because the collusion and the cover-up are in plain sight.

On Wednesday, the White House put out a summary of Trump’s July call with Ukrainian President Volodymyr Zelensky in which the American leader seemingly leans on his counterpart to investigate his 2020 political rival, Joe Biden.

And Thursday morning, the House Intelligence Committee released an unclassified version of a whistleblower complaint from a member of the US intelligence community that raises similar concerns. The whistleblower also alleges that White House officials purposely hid the full call transcript in an ultra-secret electronic system mainly meant for the most sensitive intelligence in order to shield the president from potential fallout from the call.

These two documents, along with the public admissions of Trump himself and his personal lawyer Rudy Giuliani, paint the kind of crystal-clear picture of collusion and cover-up by Trump and members of his administration that was lacking in the Russia investigation.

And this time, we don’t need a special counsel to uncover it. It’s all out in the open.

The conspiracy is coming from inside the White House

In an effort to prove Trump’s innocence, the White House decided to make the call summary public. The problem is the document showed the opposite.

The most egregious section comes when Zelensky openly asks Trump for long-promised military weaponry to help fend off Russian invaders in Ukraine’s east — aid that Trump had suspended for unknown reasons just a week prior to the call.

The president then responds with his own request: “I would like you to do us a favor, though …” he says.

Trump proceeds to ask Zelensky to look into the Ukrainian business dealings of Joe Biden’s son Hunter and mentions totally unsubstantiated allegations that Joe Biden was corruptly working to shield his son from prosecution.

Hunter Biden served on the board of Burisma Holdings, a company owned by a controversial and possibly corrupt Ukrainian oligarch. When he was vice president, Joe Biden pressured a Ukrainian prosecutor to resign because he wasn’t dealing with the corruption.

But Trump allies allege that the elder Biden’s efforts to get the Ukrainian prosecutor general fired were done not for legitimate US government reasons but rather to protect Burisma — and thereby his son — from investigation.

There is no credible evidence that that is what happened. Joe Biden did attempt to get the prosecutor general fired, but that was the result of the prosecutor’s own involvement in corruption; there is no evidence he was investigating Burisma at the time. Hunter Biden’s dealings with Burisma were arguably unethical, but there is no reason to believe that they were illegal or that his father did anything wrong.

The president asking Zelensky to investigate his main 2020 political rival is about as clear an example of asking a foreign government to interfere in an election as you’re going to find.

What’s more, Trump made the ask of Zelensky right after the two discussed much-needed US military assistance to Ukraine — which he had conveniently suspended before the call.

If that’s not a quid pro quo — asking for a “favor” in response to a direct appeal for stalled military support — I don’t know what is. Nice country you have there, Trump seems to say. Shame if something happened to it.

The intelligence community whistleblower readily admits that much of what is written in the official complaint comes from speaking with other officials who either heard the phone call directly or were familiar with what transpired during the call, as well as the efforts made afterward to keep the contents of the call secret.

Which makes what is written in the complaint so remarkable. There’s a lot to tease out, but the most damning bit of information is that White House officials purposefully tried to bury the contents of the Trump-Zelensky call because they evidently believed it could become a political problem for the president.

The entire section is so vital that it’s worth reading in full:

White House officials told me they were “directed” by White House lawyers to remove the electronic transcript from the computer system in which such transcripts are typically stored for coordination, finalization, and distribution to Cabinet-level officials.

Instead, the transcript was loaded into a separate electronic system that is otherwise used to store and handle classified information of an especially sensitive nature. One White House official described this act as an abuse of this electronic system because the call did not contain anything remotely sensitive from a national security perspective.

That is astounding. If true, it shows that there was specific intent from White House officials to keep the call under wraps by putting the transcript in an electronic system mostly meant for things like covert operations.

I may not be a special counsel, but that, my friends, sure looks like a cover-up to me.