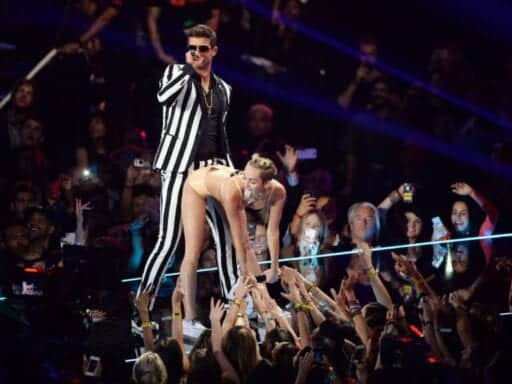 Share
Loading...
“Hip-hop culture could break Miley free of the tug-and-pull game she’d been playing with her own sovereignty since she was fifteen years old. She achieved her desired end, though her means weren’t novel.” —White Negroes: When Cornrows Were in Vogue and Other Thoughts on Cultural Appropriation | WireImage

“Appropriation gets a bad rap.”

From its very first line, Lauren Michele Jackson’s White Negroes: When Cornrows Were in Vogue and Other Thoughts on Cultural Appropriation asks you to think about what words actually mean. The recently published essay collection grapples with how countless products of blackness — language, music, fashion, memes — have been coopted, repackaged, and resold, largely without the consent, or to the benefit, of their creators.

“From Halloween costumes to Cinco de Mayo parties to the Washington Redskins, to decorative bindis and other music festival fashion, the new millennium and an avowedly more conscious generation of people is tasked with taking seriously all kinds of cultural masquerade,” she goes on to write. “Yet the more popular — and accusatory — the word ‘appropriation’ has become, the fewer people seem willing to understand the meaning behind it.”

Jackson, however, is certainly one of those willing people (she is also, full disclosure, a friend of mine). Using case studies ranging from the Kardashians to Miley Cyrus to Paula Deen to Big Dick Energy, she explores and pinpoints the term with nuance, curiosity, and wryness. Most crucially, she draws a direct line between appropriation, racism, and inequality in America; it’s not just a matter of who gets “credit” for inventing particular things, but who actually gets to cash the check.

Jackson spoke with me (who, as a white woman and an editor of stories about how and why people buy things, can always benefit from insight on the topic) about how appropriation plays out in terms of what we’re buying, who’s allowed to profit from it, and why it all matters. This interview has been edited and condensed.

Can you briefly talk through your project for this book and your understanding of the term “appropriation,” how it’s potentially been warped or miscategorized, and why you wanted to give us a new working definition?

How does money play into this, the exchange of capital and influence?

America has this really persistent myth about the importance of intellectual property. As a kid, I had this idea that making an invention would be a lot more relevant to my adult life than it ended up being!

Increasingly there’s this repeated story in our country where actually a whole lot of people don’t get to profit off of the creative insights that they have. That is totally racially structured. That is totally class-structured. So this connection between race and wealth that I’m trying to establish is that the rules of who gets to profit from what they make are totally unequal. We can see this in [areas] that seem to be as frivolous as the makeup you put on your face or the clothes you put on your body. But it all trickles from this initial system of inequality.

Let’s talk about those clothes and makeup. We see this constantly in the fashion industry where it’s like, Prada fucked up this way, Louis Vuitton fucked up that way. There’s a several-days-long cycle of them being called out and then they issue a mealy-mouthed apology, if at all, and move on. Can you talk through how that cycle keeps happening?

I think it all comes down to what we think counts as avant-garde. Not to get too academic about it, but if we look at the history of the avant-garde — not just in fashion but in other sets of concerns, modern art, for example — all these people are still relying on a certain ethnicized aesthetic to be seen as new and unique and funky in these sort of gilded, very white, Western artistic circles. People like Picasso, using this Africa of his imagination to become an artist. We can trace that all the way up to high fashion and the people who are still scraping from black communities, from brown communities, from people and places outside the West to find innovation and to find creativity.

I like to use that quote from The Devil Wears Prada:

It’s so amazing and so fun, because Meryl Streep makes it fun, but as Stella Bugbee points out, it’s ultimately a lie because Oscar de La Renta, or whoever makes cerulean hot, probably saw cerulean on some kid walking down the street who’s not even caring about whatever’s going on in high fashion editorial. He probably saw that and was like, “Ooh, that’s wonderful, I’m going to put it on the runway” and instigates the cycle. But we never start the cycle at the kid that was walking down the street. We start with the person that has all the accolades and all the visibility.

I love the part at the end of that chapter where you’re essentially saying that if we want to stop getting in that feedback loop, we might need to completely reformat how we think about fashion — it might mean no more fashion week, it might mean the end of couture houses. This idea that no, it doesn’t have to be this way, is kind of revolutionary!

[Laughs] Yeah, that’s my death-to-capitalism moment. But I’m not going to throw the first brick at fashion week.

How do you see the media’s role in shaping all of this as well? Do you think that the way fashion journalism in particular, and the media more broadly, covers these instances of appropriation is useful?

The media coverage totally feeds into it, but I have so much sympathy. I am not a journalist, but I’m close enough to the field that I know that a lot of people don’t have a whole lot of time to cover these things. Right? Like no one’s giving the average fashion journalist two weeks to do a deep dive on the history of Prada and appropriation or something like that; that’s not something a lot of publications are allowing their staff. So in that case it’s like, yeah, you only get to do the quick blog post and move on because you have like 10 other blog posts within the hour.

So I think, actually, it’s not necessarily the fault of the journalist or the critic, but really the publications and the publishers who are maybe prizing a certain kind of timeliness above thoughtfulness. If there’s anything that needs to change, it’s the people who have the pockets to pay for people to do the research they need to do their jobs.

So we’re back to capitalism again.

Yeah! Funny how that keeps happening.

Toward the end of the book, you write about how black women in particular are seizing the means of production when it comes to opening their own Instagram boutiques. Could you explore this idea of selling directly to people who want to receive this cultural cachet?

Instagram is particularly interesting, maybe because it [changed] more quickly than Twitter or Facebook, in just a few years. It had its stated purpose of [being] a platform for photographs — it’s not about words, it’s not about status updates, it’s all about the visuals.

And so it was the users who figured out that actually Instagram could be a great way to make money. Now Instagram is playing catch-up by saying, “Oh no, we want a cut of that.” We can even trace it up to what’s going on with the “Likes” that are going to disappear. People (like Nicki Minaj) have rightfully pointed out that it has nothing to do with mental health; it has everything to do with the fact that “Likes” are monetized, or can be monetized.

So if anything gives me hope, it is the clearly scrambling actions of these platforms to try to keep up with what they’ve wrought and what users have wrought. (For better and for worse, in a case like Twitter where what the platform has become is a place for harassment.)

I still think the idea that the users are more creative than the people behind the platforms is where my optimism lies, if there’s optimism to be found.

The mistake that toppled the Berlin Wall
Trump has fired the intelligence watchdog who first flagged Ukraine whistleblower complaint
Companies are quietly rolling back pandemic-related perks and benefits
Hurricane Dorian is gaining strength, and heading toward Florida
All the near-total abortion bans passed this year have now been blocked in court
A Joe Biden fundraiser offers a new clue into how he might regulate Big Tech