The economy is growing. Democrats want to know who’s benefiting. 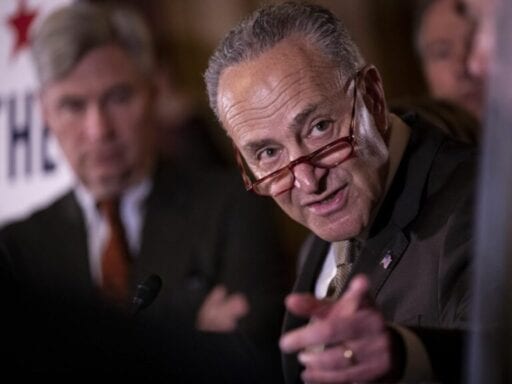 The United States economy grew by 2.2 percent in the fourth quarter last year, according to updated numbers released by the government on Thursday. Congressional Democrats are renewing their push to figure out if that growth is touching ordinary Americans.

“Income inequality in the United States has increased dramatically over the last 40 years, with economic gains increasingly concentrated among the most affluent. By contrast, the majority of Americans have seen incomes and wages stagnate, even as the most closely watched measure of our nation’s economic health, Gross Domestic Product, paints a rosier picture,” Schumer and Maloney wrote.

They argued that relying only on top-line GDP growth “fails to provide a fully accurate assessment of our nation’s economic condition, particularly with respect to income growth for workers.”

Schumer and Maloney pointed to language attached to Congress’s 2019 spending bill that “encourages” the Bureau of Economic Analysis (BEA), which releases quarterly GDP numbers, to report how growth is distributed along the income scale.

Per legislation put forth by Schumer and Heinrich last year, the Measuring Real Income Growth Act of 2018, the bureau would have to put together distributional measures of economic growth to be released with quarterly and annual GDP reports.

The language in the appropriations bill doesn’t require the bureau to actually do the calculation, so Schumer and Maloney’s letter is basically a forceful suggestion. They’ve asked Moyer to respond by April 11.

A recent Urban Institute survey found that last year 40 percent of American families struggled to meet at least one of their basic needs, including buying food, paying medical bills, or covering utility bills, rent, or mortgage. But those gaps don’t show up in official measurements like the GDP, which measures growth in the overall economy.

What Democrats are pushing for is for the BEA to produce a new metric, the “income growth indicator,” to be reported quarterly and annually with GDP numbers starting in 2020 that would show who is and isn’t benefiting from economic growth.

There’s some disagreement about how this would actually work: The bureau would have to come up with a way to measure and report inequality, for example. And some experts question whether it’s really necessary. But proponents hope it will draw more attention to income inequality in America and perhaps even get policymakers to act.

“We spend a lot of time here in the United States and other countries trying to measure what economic success looks like,” Heather Boushey, chief economist at the Washington Center for Equitable Growth think tank, said of the Schumer-Heinrich proposal last year. “What really matters is what does [GDP growth] look like for people? For families? Is that growth translating?”

Producing such statistics would require some legwork. Right now, the best information the government has comes from reports from the Current Population Survey and Congressional Budget Office and tax return data from the IRS. But that data is reported separately from the numbers we think of as indicating economic health.

The census’s income and poverty report, for example, doesn’t capture the richest Americans, and the CBO’s report doesn’t come out regularly. (The best publicly accessible data combining economic growth and income inequality is from researchers.)

Last year, I put together an explainer on Schumer and Heinrich’s proposal and how it could pan out. Some experts I spoke with were skeptical.

Jeffrey Miron, an economist at Harvard University and director of economist studies at the libertarian Cato Institute, expressed doubts that such a measure was really necessary or would make sense to calculate.

Dean Baker, an economist at the progressive-leaning Center for Economic and Policy Research, also expressed doubts. Current income data from the census and IRS is limited and retrospective, and fielding new surveys would be difficult and, initially, perhaps inaccurate.

“I’m just not sure this is at all helpful,” he said. “It might be better to get an official release on something like the tax data when it becomes available with a year or so lag.”

If the BEA were to start to show how economic growth affects different income groups, it wouldn’t directly solve any problems, but it would likely draw attention to the growing problem of income inequality in America.

It’s true that the US is in the midst of a long economic recovery — but it’s also true that not everyone is experiencing that growth equally. The US economy grew by 2.9 percent in 2018 (still short of President Donald Trump’s 3 percent goal), but that wasn’t spread evenly across all Americans.

See the full letter from Schumer, Heinrich, and Maloney below: