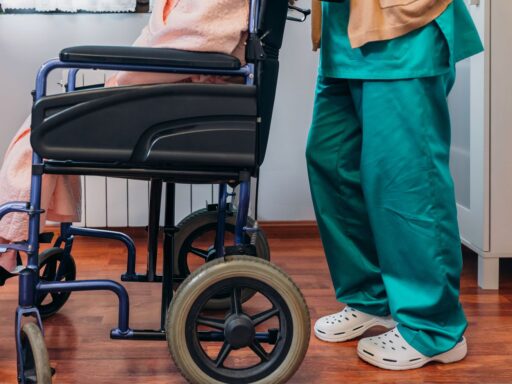 Danskos, Crocs, and Blundstones have long been lifesavers for nurses, food service workers, and other people who spend all day on their feet.

Elise Morocco works in a very messy profession. An OB/GYN in residency at Los Angeles County Hospital, she is frequently splashed with fluids: “blood, amniotic fluid, pee, poop, you name it,” she detailed by phone, when I haltingly asked her to elaborate. In Morocco’s 24-hour shifts, she estimates that more than half the time she’s on her feet, walking and running around. As a result, her shoes take a lot of abuse. Those fluids? “They all fall onto my feet.”

In her sometimes 80-hour workweeks, Morocco said that the shoes she wears every day really matter. “I definitely started out trying to wear sneakers and it just wasn’t cutting it,” she said. “You just wear them out so much if you’re also exercising in them.” When Morocco discovered Calzuro clogs, which can be both sterilized in a medical autoclave machine and put in the dishwasher, she was an instant convert. “People in my profession talk about shoes all the time,” Morocco added. “Everyone has strong opinions.”

For the hundreds of thousands of essential workers in fields like health care, food service, and education who are tasked with being on their feet for the entirety of their work shifts, shoes are second only to masks as the most important piece of garb they put on for the day. In some professions, workers can be on their feet as long as 16 hours, and coming home with sore feet is just not an option. In the midst of a pandemic, when the burden on essential workers is especially high, supportive shoes have to be an afterthought. There are more important things to focus on.

“When I started [in podiatry], people would ask, ‘Is there a requirement that you wear ugly shoes?” Dr. Ami Sheth, a Los Gatos-based podiatrist, told me by phone. Even then, the dig didn’t hurt. All that mattered was that her feet — in a job where she was intensely aware of how bad shoes could have bad consequences — were comfortable. “A lot of people get into podiatry because their feet hurt,” Sheth said. “The running joke is, ‘That doctor is dressed so cute. Give her two years.’”

It stands to reason, then, that certain footwear brands have emerged over time as the tried-and-true go-tos for workers who are on their feet all day. You’d probably recognize the big three: Danskos, Birkenstocks, and Crocs. But there are as many perspectives on why a nurse or chef might choose one shoe over the other as there are essential workers themselves. And though these may be the most familiar options to an outsider, the options for supportive footwear marketed to essential workers are seemingly endless.

There are a few common factors that go into how an essential worker decides what shoes to wear. The most important is that they are comfortable for long shifts, that they can be worn all day and not break down or cause arch pain. Then there are questions of cleanup and slip resistance: In places like kitchens or ORs, there can be a lot of liquid flying around, and sanitation — especially now — is extremely important. The founder of Calzuro clogs, Gianfranco Bidoia, was “always concerned with contamination,” Jenifer Wynne, the US distributor for the Italian-made shoes, told me. During the pandemic, “the demand for Calzuro clogs has definitely grown,” Wynne said. “They are really considered to be personal protective footwear.”

While the combination of these considerations doesn’t always yield the most stylish of shoes — sterilizable materials and arch support don’t exactly scream high fashion — the way the footwear looks is not, by any means, an afterthought. Andi Repine, a pediatric nurse practitioner at A.I. duPont Hospital for Children in Wilmington, Delaware, said she switches out her Danskos to match her outfits. “I have three pairs: black with a floral imprint, gray, and cheetah, of course,” Repine said. “Some people call them ugly, but I pay them no mind because at the end of the day, it’s about how they make my feet feel.”

Danskos have become probably the most recognizable footwear in the health care and food service industries in the 30 years since they were developed. Danskos spread among workers in essential fields by “word of mouth,” Jim Fox, CEO of Dansko, told me. But initially, it wasn’t like Dansko was doing anything new. “Part of the thing to realize is that the design of the clog itself has been around for centuries,” Fox said. “It’s not like Dansko [invented] that design specifically.”

Dansko was founded in 1990 by a husband-and-wife pair, Peter Kjellerup and Mandy Cabot. While traveling to Denmark in the late ’80s, Kjellerup and Cabot, who ran an equestrian facility in Pennsylvania, found the clogs there to be the perfect barn shoe. “They started bringing them over to the US and sharing with friends,” Fox said. When Cabot saw the demand increase, it was only a matter of time before their design caught on. “Anybody who is on their feet all day — restaurant workers, educators, people in health care — realizes you have to take care of your feet so you can do the rest of your work. You’ve got enough stuff to worry about.”

For Erin Fitzgerald, an RN on the bone marrow and stem cell transplant floor at Memorial Sloan Kettering Cancer Center in Manhattan, Danskos were the first nursing clog she tried, and she never looked back. Fitzgerald works 12.5-hour shifts, and she estimates she’s on her feet about half of the time. Not wearing the right shoes “can be the difference [between] being in pain after shifts and on days off,” she explained. “There was a noticeable difference when I switched to clogs as opposed to sneakers,” she said. “I still sleep with my legs elevated after a shift and wear compression stockings when I can, but the clogs provide so much support and I don’t seem to require as much recovery time.”

For some professions, though, Danskos fall short of one qualification: lightness. A pediatrician friend described trading in her Danskos for lightweight sneakers during residency, when she’d work 12- to 24-hour shifts, because “in pediatrics, running around a lot is just something you do.” Aeration is also an important quality for hot places like kitchens. “Clogs are really great kitchen shoes, but I’ve found that if I’m on my feet for more than 10 hours, my feet swell up and they don’t fit into the shoes,” Millicent Souris, the director of emergency food at St. John’s Bread & Life, told me. Instead, Souris wears Blundstones, the Australian brand of Chelsea boots that have of late come into fashion. The rubber sole makes a huge difference, Souris said. “I have put my feet through a lot in my life, with terrible shoes and sneakers and flip-flops. I can no longer do that.”

Souris said she caved to wearing “very uncool footwear” when she was working in kitchens at fancier restaurants where floor mats — intended to counter fatigue — weren’t allowed because owners thought they were “gross.” “It’s really cool to give up your back and foot health so some egomaniac can try to make a name for themselves in NYC food,” Souris said.

Workers in the film industry were known to sport Blundstones for years before they became cool, Olga Abramson, a film worker, told me. “I kinda hate that they’re now trendy because you used to be able to spot filmmakers by their shoes.”

The uncool becoming cool is a common occurrence for unattractive shoes typically relegated to doctor’s offices and back kitchens. Danskos and Birkenstocks have both had a style renaissance over the past 10 years, with Danskos becoming available in trendier colorways and Birkenstocks partnering with fashion brands like Proenza Schouler. Calzuro clogs, the shoe of choice for health care professionals like Morocco, have been written up in Bon Appétit. Amanda Parker, the managing director of Cowgirl Creamery, said that she was devoted to wearing “big, ugly food service Birks” when she took a work trip across America as a cheesemonger. “They’re indestructible. You could drop a knife on your foot and likely be okay.” The same can’t be said for the open-toed Rick Owens Birks, but they weren’t exactly designed for that purpose, after all.

Nor were high-fashion collaborations meant to be affordable to workers in fields that often don’t make much money. But the more classic alternatives aren’t exactly cheap, either. Danskos, Birkenstocks, Calzuro clogs, Blundstones, and Sanitas are all more than $100, while Crocs, another common footwear choice for essential workers, rarely go above $50.

It’s for this reason that many essential workers start with Crocs and upgrade over time. Repine began her nursing career with Crocs. “I shortly noticed that my feet would kill me by the end of my shift,” she said. “But they were cheap and I was not trying to spend money on work shoes.” Souris pointed out that a pair of Danskos put her back more than a day’s wages. “Cooks don’t make any money, so I’ve generally had terrible shoes,” she said. So when she found a pair of Blundstones at a flea market for $5, she was content. (During the height of the pandemic last year, Dansko and Calzuro both held initiatives to donate shoes to essential workers.)

While the American Podiatric Medical Association bestows seals of approval to shoes and footwear products that “promote good foot health,” Sheth said that the decision is always bound to be a highly personal one. But a good place to start is finding out the height of your arches with the bathwater test. When you get out of the shower or bath, look at your wet footprint on the ground (or a piece of cardboard if you don’t want to get your floor wet). “If you have more of a footprint on the ground, you have a lower arch. If you have less of a footprint, you have a higher arch.” Determine the kind of shoes you need based on your arches. “Most people could use a little arch support,” Sheth added.

Sheth said that most of all, you should be able to move your feet and your toes within your shoes and that your shoes should be comfortable to you. “Your shoes should breathe,” she said. “A lot of essential workers don’t have the luxury of popping in and popping out of their shoes. You’re masked, gowned, geared up, and break rooms have been taken away. You want to make sure there is aeration.” At home, the same guidance applies, even for remote workers stuck behind laptops all day. “I tell people to have a pair of house shoes, too,” Sheth recommended. “You’re doing laundry. You’re moving around. You’re washing dishes. Don’t dress yourself based on the location,” she said. “Dress yourself based on the work that’s getting done.”

Join an all-star panel of critics to talk Princess Bride at the next Vox Book Club live event
Hospitals are cutting staff just when America needs them most
World Cup shootouts: why the team that goes first usually wins
Why innovative tech startups are thriving across the Middle East
When I twerked onstage with Lizzo, it was an act of political defiance
NBC’s Trial & Error is a joyful break from reality