The fight over defunding Stars and Stripes, explained 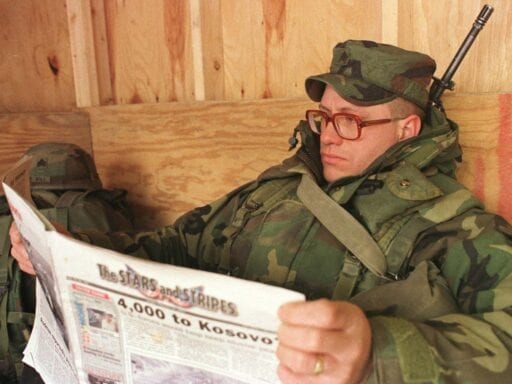 The Pentagon moved to close the longstanding, popular military newspaper. It’s not the first time.

The Trump administration moved to close Stars and Stripes, a popular state-supported newspaper serving US military members, and was criticized for the plan Friday. Shortly afterward, President Donald Trump reversed the Pentagon decision and said the federal government won’t cut funding to the paper.

Trump’s announcement came as he faced fierce blowback over reports that he’d called slain American soldiers “losers” and “suckers.” But it also renewed a longstanding debate over whether the Pentagon should be funding its own newspaper — while raising new concerns about the Trump administration’s approach toward taxpayer-funded news outlets.

Pentagon officials sent an order to Stars and Stripes in August requiring the paper to present a plan for shutting down by September 15, and for stopping publication by September 30, according to a report by Kathy Kiely for USA Today. The military leaders claimed authority to shut down the paper under Trump’s 2021 defense department budget request, which sought to eliminate its $15.5 million annual budget.

But Congress has yet to approve the president’s budget request; an appropriations bill that passed the House of Representatives in July reversed Trump’s proposal and restored Stars and Stripes’s funding. The Senate version of the bill did not include funding for the paper; however, as the Military Times notes, the issue of funding the paper is expected to be taken up later by both chambers later this year.

Ahead of Trump’s announcement, a number of bipartisan lawmakers asked Defense Secretary Mark Esper to stop the shutdown of Stars and Stripes, arguing a savings of $15.5 million would have little impact on the department’s $700 billion budget while having “a significantly negative impact on military families.” The paper has about 1.3 million readers and has been distributed to US troops since its founding during the Civil War.

Aides showed Trump news reports that blamed him for putting an end to the beloved paper, prompting him to reverse the cuts, a senior administration official told the New York Times.

While Trump has certainly expressed animosity toward journalists during his time as president, his administration is not the first to attempt to eliminate the paper that serves US troops.

The paper was launched in 1861 by journalists who were Union soldiers and began regular publication during World War I. It is supported by Defense Department funding, but is editorially independent and is delivered to US troops around the world. As the senators who wrote Esper noted, the paper has often covered issues other papers have not, including the continuation by schools on military property of in-person instruction despite the pandemic.

It has also consistently published work that’s put it out of step with Pentagon leadership, such as when it released a report uncovering internal documents that showed the Department of Defense was not only using contractors to rate journalists’ reporting on the war in Afghanistan, but appeared ready to use those ratings to manipulate the journalists into producing more positive coverage.

Unsurprisingly, these sorts of reports have created tension between Stars and Stripes and the officials within the executive branch who have a hand in appropriating its funding. Former President Barack Obama’s administration proposed gutting the paper multiple times during his presidency.

In recent years, those with close connections to the paper have allowed there’s some validity to questions over whether the paper should continue to exist. Former Stars and Stripes ombudsman Tobias Naegele wrote in 2016 that the paper does lose money, and that there’s legitimacy to the argument that a print publication for troops is no longer necessary in a world in which many soldiers can get news online — including on the Stars and Stripes website.

But Naegele also said troops in areas with less reliable internet access — such as Afghanistan, Iraq, and Kuwait — can and do benefit from a print product crafted exclusively for them.

And troops’ difficulties in getting news digitally may become a more common problem, Jeff Schogol, a reporter for the military news outlet Task & Purpose, told the New York Times.

“The U.S. military as a whole is trying to reduce its electromagnetic signature, and that means service members will likely not have their phones or even access to the internet while in a war zone,” Schogol said. “That’s why Stars and Stripes is still vital to keeping troops downrange informed. The Russians and Chinese cannot jam or launch a denial of service attack against physical copies of a newspaper.”

Stars and Stripes isn’t the only news organization with a fate tied to the government purse. The US Agency for Global Media oversees five news outlets — Voice of America, Middle East Broadcasting, Radio Free Asia, Radio Free Europe/Radio Liberty, and the Office of Cuba Broadcasting — that broadcast around the world.

Trump, who has called Voice of America “disgusting,” nominated Steve Bannon ally Michael Pack to head the agency. It took two years for the Senate to approve the nomination due to concerns that he would transform the outlets into a propaganda machine for the president.

But Pack took over the agency after being confirmed in June. He quickly fired four top officials and dissolved their organizations’ boards. The remaining leaders of Voice of America resigned over the appointment.

While the outlets did conform heavily to pro-US views during World War II and the Cold War, the Agency for Global Media now remains largely objective, with its editorial independence intended to show the US’s dedication to a free press. But experts — and reporters within the agency — are concerned Pack’s leadership may be undermining that.

Pack, a conservative filmmaker, told The Federalist Radio Hour podcast last month that his plan is “to drain the swamp, to root out corruption, and to deal with these issues of bias,” and later suggested that some journalists may be foreign spies.

That prompted a number of Voice of America reporters and editors to write a letter to the publication’s director arguing Pack’s comments “endanger the personal security” of VOA reporters and threaten US national security objectives. They also claimed many executives have been dismissed for attempting to educate Pack on Agency for Global Media outlets’ legal rights to editorial independence.

As with the funding question over Stars and Stripes, the Trump administration isn’t the first to express frustration with Agency for Global Media outlets. Vox’s Alex Ward explains:

Pack has a point when he says his agency has problems, many of which have been previously highlighted by Democrats such as Hillary Clinton. A recent controversy last month included a video made by Voice of America’s Urdu service which many (including Pack) said looked more like a pro-Biden political ad than a news piece, leading the CEO to remove multiple contractors and editors involved with the production.

Nevertheless, Pack’s changes have raised considerable concern that the administration is silencing impartial voices, a concern mirrored by the announcement the Trump administration planned to get rid of Stars and Stripes. Ancillary to these concerns is the president’s consistent denigration of US media, both commercial and public. He’s painted journalists as the “enemy of the people” for years.

Thus far, however, both the Agency for Global Media outlets and Stars and Stripes have been able to survive. And when Congress resumes session, it is likely Stars and Stripes will receive the funding Trump has promised. Both Republican and Democratic lawmakers have signaled support for the news organizations, with Trump ally Sen. Lindsey Graham (R-SC) telling Esper in August, “as a veteran who has served overseas, I know the value that the Stars and Stripes brings to its readers.”

What the IG report found
Biden had his first call with Putin. He said everything Trump wouldn’t.
One of America’s key voting rights groups plunged into chaos when it was needed most
Biden and Sanders vie for strong South Carolina finishes, as Steyer eyes his first delegates
In Trump’s White House, literally everything is 'so important'
Trump loyalists are working hard to defend the president. It isn’t going well.