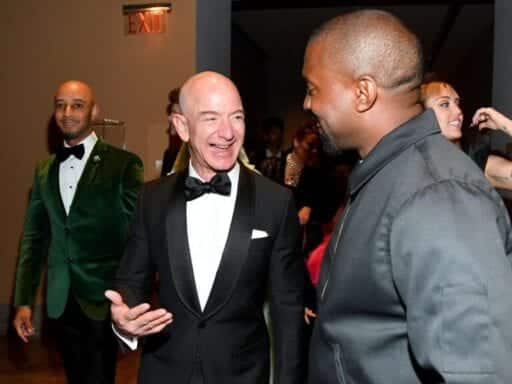 Share
Loading...
Jeff Bezos talking with Kanye West at a charity ball in 2019. | Kevin Mazur/MG19/Getty Images for The Met Museum/Vogue

The answers you deserve to know.

Amazon CEO Jeff Bezos, the wealthiest person in the world, has earned many rounds of applause for the commitment he made on Sunday to give $10 billion to combat climate change, but he still isn’t answering many basic questions.

The $10 billion he pledged for the Bezos Earth Fund is an unprecedented contribution that affords a private citizen great power over the world’s response to the climate crisis. It’s also a donation that deprives Americans of tax dollars since it’s subsidized by the tax code. And it comes amid mounting pressure on both Amazon for its environmental impact and on Bezos for his paltry prior philanthropy.

So there’s a clear public interest in knowing exactly how Bezos plans to spend this money. There are not, however, clear answers on some very important details. Such as:

Teddy – It would also be worth knowing if the plan is to spend the money down over a few years (I hope so!) or hold it in an endowment (which would be dumb, while the world boils away). Please, Jeff: Get it out the door in an effective way!

This is good and: Any super-wealthy person who says they want to make a meaningful impact on an issue should also be directing money & attention to electoral efforts — otherwise, they’re not serious about actually making a difference. https://t.co/RhqmThsuAA

We asked Amazon all of these questions to try to gain clarity into what could safely be considered one of the most important tech gifts ever. It is hard to believe that at least some of the questions don’t already have answers. But Amazon declined to offer them:

“We just don’t have further details to share on announcement at the moment,” said a company spokesperson. “Please stay tuned.”

In Bezos’s defense, this fits a pattern. In September 2018, he announced on social media his first large philanthropic commitment, $2 billion for homelessness and early childhood education work, but he didn’t fill in the details with a website and the advisory committee until November. Bezos says that we’ll hear from the Bezos Earth Fund this summer, so perhaps that’s when we’ll get some answers.

But it is not unreasonable to expect answers for these questions from the get-go. Bezos is enjoying some rare positive headlines about his personal wealth, but with that should come some transparency and accountability about how exactly he will spend it. Philanthropy, at this scale and with this mission, is not merely a personal matter that is none of our business. It affects us all and deserves scrutiny.

Amy Coney Barrett describes climate change as a “very contentious matter of public debate”
State-level Republicans are making it easier to run over protesters
Fox News turns Winter Storm Uri into a cudgel to own the libs
The House just passed a $2 trillion coronavirus stimulus package. It now heads to Trump’s desk.
Here’s why it’s so hard to make a NAFTA deal
Bernie Sanders inauguration memes are liberal comfort food