The Fox News moment that revealed a dangerously confused president 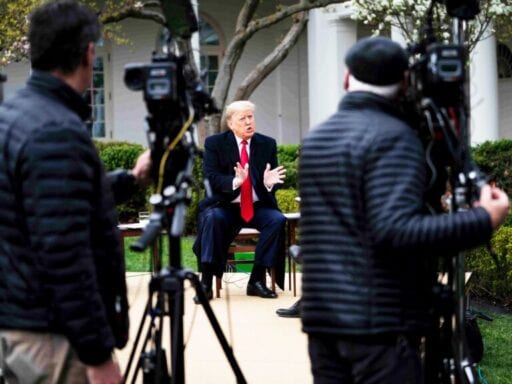 Trump wants Americans to flock to churches on Easter Sunday.

One moment during President Donald Trump’s Fox News appearance on Tuesday served as the starkest example yet of how much he does not understand the seriousness of the coronavirus pandemic: He urged Americans to flock to churches on Easter Sunday, just 19 days away.

Trump told Fox News anchor Bill Hemmer he selected Easter as the day he wants businesses to reopen, saying he’d like to see “packed churches all over our country” — the exact type of large gatherings that the CDC, the WHO, and Trump’s top health advisers have all urged suspended to help stop the spread of the virus.

“I would love to have it opened by Easter,” Trump said, speaking about when he sees the country returning to normal life.

“That would be a great American resurrection,” Hemmer replied.

Trump on ending social distancing: “I would love to have it opened by Easter.” (That’s April 12)

“That would be a great American resurrection,” host Bill Hemmer replies. pic.twitter.com/G1AhP1biNI

Since Sunday, Trump has repeatedly indicated he plans to recommend that the White House’s social-distancing guidelines be relaxed and Americans return to work, even though experts say the country hasn’t yet experienced the worst of the coronavirus pandemic.

Trump’s televised briefings, tweets, and appearances on Fox in recent days raise serious doubts about whether the president understands the threat of the coronavirus or how to best slow it down. As he spreads messages at odds with public health experts, he’s putting real lives at risk.

During Tuesday’s Fox News town hall — which took place a day after the US recorded its highest single-day death toll amid the coronavirus crisis so far — Trump rested his case for relaxing social distancing by comparing possible exposure to the coronavirus with unfortunate things that we just take to be facts of life, like the flu or car wrecks.

Here’s what Trump had to say in response to Hemmer’s question about why resuming something approximating normal American social and business life as soon as possible is a good idea (the video follows):

Trump suggests going back to work during a pandemic is really no big deal because lots of people die from the flu and car accidents pic.twitter.com/pRTjmLH7xo

Already facing a difficult reelection campaign before the outbreak of a deadly pandemic his government was unprepared to deal with, it’s understandable that Trump wants to stabilize an economy decimated by the social-distancing measures meant to stop the spread. But his comments ignore two big ways in which the coronavirus can’t be compared to the flu or car crashes: It’s far more contagious than either, and far more deadly.

One reason the coronavirus is so concerning is how contagious it is. Without social distancing, experts believe one infected person could infect up to 2.5 other individuals.

Because the coronavirus is so contagious, it could easily overwhelm America’s public health system, leaving hospitals too full to properly treat patients and equipment in short supply. That’s already on the cusp of happening in New York state, where Gov. Andrew Cuomo pleaded with the federal government earlier Tuesday to provide more medical gear, including much-needed ventilators to help patients with severe Covid-19 cases breathe.

CUOMO: “FEMA is sending us 400 ventilators … I need 30,000 … you want a pat on the back for sending 400 ventilators? … you’re missing the magnitude of the problem.” pic.twitter.com/9VtzlvVOEb

Car crashes, of course, are not contagious, nor are there so many of them that they overrun hospitals or threaten the nation’s supply of medical masks and ventilators. That’s also the case with the flu. According to epidemiologists, an individual with the flu is at risk for spreading it to up to 1.3 people — about equal to coronavirus’s contagion level with strong social distancing.

Despite this, Trump insisted the flu is more dangerous and singled out Cuomo for criticism. The president blamed the governor for a problem he’s powerless to solve, saying, “He’s supposed to be buying his own ventilators.” (Cuomo and other governors argue it’s suboptimal for states to bid up prices by competing against each other for supplies, and that those purchases are best made by the federal government.)

At another point, Trump attacked Cuomo for not doing more on his own to prevent travel from China as the virus spread there. Experts, of course, argue that at best, travel bans like the one Trump instituted at a national level buy time for governments to act — time Trump failed to use. At worst, they’re useless.

“Do you blame the governor for that?” — with a smug smirk on his face, Trump tries to pin blame for New York’s coronavirus outbreak on Gov. Cuomo because he allowed people to travel from Asia back to New York City during the holidays pic.twitter.com/6syuTlbWdB

The whole point of the “15 days to stop the spread” campaign that Trump embraced just nine days ago is that strict social distancing is necessary to “flatten the curve” of cases and make sure hospitals aren’t overwhelmed. But Trump encouraging people to go back to work runs the risk of allowing the virus to spread out of control at a time when places like New York are already struggling to contain it.

Trump, however, clearly views the situation primarily as an economic crisis (and thus, for him, a political one) instead of one in which preventable deaths can be avoided.

Coronavirus is actually far deadlier than the flu or car crashes

In 2018, roughly 36,560 people died in automobile accidents. Another 38,000 died from flu-related causes in the winter ending that same year.

We don’t yet know how many deaths the coronavirus will cause. But a recent study pegged the mortality rate for symptomatic coronavirus cases at 1.4 percent. That may not sound devastating in a vacuum, but it is significant, as that rate means the coronavirus could kill up to 1.1 million Americans if allowed to spread unchecked.

This is why it is important to socially distance. We do not yet have a coronavirus vaccine, meaning the best tool we have to slow the spread of the virus and minimize deaths is to practice social distancing until testing is so widespread that we know how far the virus has spread.

But Trump’s argument during the Fox News town hall, and elsewhere, has been to insist that Americans have already learned the necessary lessons about social distancing and will be careful about practicing it at work. But there’s really no way for a restaurant server to stay at least six feet away from customers, nor is it feasible for example for people to practice distancing in crowded buses or factories.

Trump, however, doesn’t seem to understand the point of social distancing. During an interview with Fox News that aired after the town hall, he revealed this by telling Hemmer that he hopes to see churches packed on Easter.

Trump on why he picked Easter as the day he wants to end strict social distancing and reopen American businesses: “Easter is a very special day for me … Easter Sunday, and you’ll have packed churches all over our country.” pic.twitter.com/6cXEtW8LmR

Experts say the most direct path to normalcy is not to just hope people manage not to infect each other, but the establishment of a rigorous testing regime — one that would allow us to understand where it might be safe to relax social distancing and which states and cities might require more restrictive quarantines. But the Trump administration’s coronavirus response continues to be plagued by testing failures that hamper all of our abilities to develop a reliable picture of how far the virus has spread. Asked about those failures during the town hall, Trump changed the topic before ultimately absolving himself of responsibility.

“Nobody ever expected a thing like this,” said Trump, who worked to dismantle America’s pandemic preparedness during his first three years in office. “Nobody would say that million and millions of people [would need to be] tested.”

Asked about problems with coronavirus testing, Trump oddly pivots to bashing the Ukraine “witch hunt” before absolving himself of all responsibility pic.twitter.com/76qnbQ5Bqz

Fox News takes the “Dear Leader” stuff up a notch

“President Trump, I do believe that as a nation we are beholden to you for your decisive, swift action in the beginning with the travel ban,” Fox News contributor Dr. Nicole Saphier tells Trump.

Others parts of the broadcast bordered on irresponsible. Before Trump joined the broadcast, reality television star Dr. Oz asked Vice President Mike Pence a leading question about an unproven drug cocktail that Trump and a number of his Fox News supporters have promoted as a possible coronavirus treatment.

The town hall gave the impression of a dangerously misinformed president being propped up by sycophants who are unwilling or unable to ask him tough questions. That danger will soon become even more palpable if Trump follows through with recommending that people go back to work and pack into churches and thereby fans the flames of the still-spreading virus.