The future of Brexit will be decided in December 12 elections 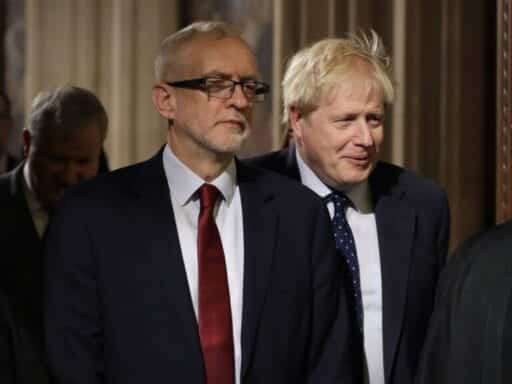 Parliament just voted to have a Christmastime general election that is going to be a referendum on Brexit.

The United Kingdom will now try to break the Brexit deadlock with a general election.

A day after Brexit was delayed a third time, the UK Parliament voted on Tuesday to hold an election on December 12 — a little more than a month before the new Brexit deadline of January 31, 2020.

That means the question of how — or even whether — the UK should divorce the European Union will be put back to the British public.

Prime Minister Boris Johnson has tried three times to call an election in the past few months, and Parliament rejected him every time — including just a day before.

But the prime minister’s fortunes shifted after the opposition Labour Party — which had previously abstained from the vote — decided that it would, after all, back an election.

No Deal is now off the table so tonight Labour will back a General Election.

We’re launching the most ambitious and radical campaign for real change our country has ever seen.

This is a once in a generation chance to build a country for the many, not the few.

Labour leader Jeremy Corbyn said the EU’s approval of the Brexit extension on Monday avoided the risk of a no-deal Brexit happening (at least in October), so he was ready to back the election.

Still, the whole process was a bit weird. Under a 2011 act, Johnson needs a two-thirds majority of 650 members of Parliament (MPs) to call an election. On Monday, he failed to get the numbers.

But Johnson pushed ahead, embracing a plan put forward by smaller opposition parties, specifically the pro-Remain Liberal Democrats and the Scottish National Party, to amend that 2011 act to allow for a one-off election in December. This legislation requires a straight majority, making it easier to achieve.

That pressure of an imminent election happening whether Labour went for it or not may have ultimately swayed Corbyn. But not everyone in his party agrees an election is a good thing, as Conservatives lead Labour in many recent polls.

In some respects, it’s incredible it took the UK this long to get here. (The election isn’t finalized yet, but it’s not expected to face resistance in Parliament’s House of Lords.) Even though the UK just had elections in 2017, a lot has changed since then. Parliament hasn’t been able to come to a consensus on Brexit. Brexit has been delayed multiple times. Boris Johnson replaced Theresa May as prime minister. There have been two versions of a Brexit deal, both of which offer a much clearer picture of what a UK-EU divorce would look like and set up the next phase of negotiating the future relationship.

Even though Johnson and the Conservatives may be feeling confident in the polls right now, if Brexit has offered any lessons, it’s that nothing is predictable. Turnout might be an issue in a pre-Christmas and winter election. Smaller parties like the Liberal Democrats, on the pro-EU side, and the Brexit Party, on the pro-Brexit side, have gained in popularity as the Brexit debate has become more polarized. They could definitely make it harder for either Conservatives or Labour to win a majority outright.

An election fought over Brexit is going to be contentious. But it might be the British public’s last say on Brexit.

The CDC calls for quarantining even after a negative test. The White House isn’t listening.
CRISPR has ignited a gene-editing revolution. These Nobel-winning women scientists were the spark.
Scott Pruitt’s faith guided his time in office and shielded him
Protesters confront Homeland Security chief Kirstjen Nielsen at Mexican restaurant
Pulitzer Prize-winning poet Tracy K. Smith on the purpose and power of poetry
Trump’s weekend rallies showed just how unhinged his campaign is