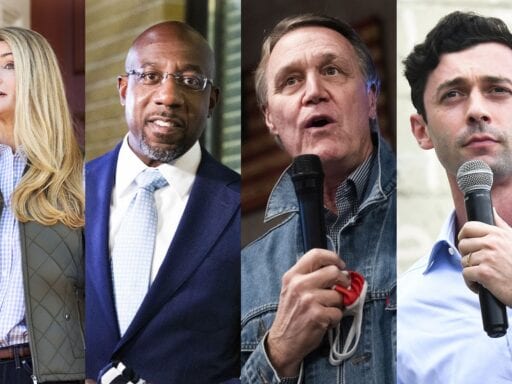 It will take about two more months to know which party controls the Senate.

The battle for control of the US Senate could come down to Georgia.

Both of Georgia’s Senate races will go to a runoff election to be held on January 5, 2021. With a small number of votes still to be counted in Georgia, particularly in the Democratic-leaning Atlanta suburbs, Republican Sen. David Perdue did not hit the 50 percent threshold he needed to avoid a runoff race with Democrat Jon Ossoff.

As of 7 pm ET on November 5, Perdue was sitting at 49.89 percent, compared to 47.80 percent for Ossoff, according to Decision Desk.

That’s runoff No. 2 for Georgia voters. That result has already been determined for the race between Republican Sen. Kelly Loeffler and Democrat Rev. Raphael Warnock in the special election for a Senate seat vacated in 2019 by retiring Sen. Johnny Isakson. That special election initially featured 20 candidates in an all-party “jungle primary,” so a runoff was all but guaranteed.

At first glance, this might be a surprise for national political observers. Georgia has a long history of being conservative. Even though it has elected statewide Democrats more recently than some of its Southern peers, they were often conservative white Democratic men.

But Georgia has the potential to flip for former Vice President Joe Biden and Sen. Kamala Harris, and now they have a shot at not one but two Democrats making competitive runs for the Senate.

“Democrats are going to be very excited in Georgia but also nationally,” University of Georgia political science professor Charles Bullock told Vox. “Ossoff and Warnock, any kind of resource or help they need, they’re going to get.”

Senate Democrats are still a few seats short of a Senate majority, but the fact that both Senate races in Georgia will go to a runoff means the battle for control of the Senate is not over just yet.

All eyes — and all fundraising dollars — are about to shift to Georgia for the next two months.

Why Georgia is so competitive this year

“Counties and suburbs of Atlanta are moving at light speed away from Republicans,” said Cook Political Report Senate editor Jessica Taylor, who rates both Georgia races as toss-ups. “Trump has accelerated a more natural evolution, but that has made it hard.”

Atlanta’s diversifying suburbs were already worrisome for Republicans before 2020, but they appear to be the epicenter of Democratic strength this year. The GOP is also watching as existing trends are being hastened by a combination of white suburban voters moving away from Trump and increased turnout among Black voters.

The metro Atlanta area is booming, and a lot of people moving there are young and diverse. Increasingly, they’re voting Democratic.

Between 2010 and 2019, the area’s population grew from about 5.3 million people to more than 6 million, according to data from the US Census Bureau, reported by Curbed. That growth put the Atlanta metro area fourth in growth nationwide, behind Houston, Dallas, and Phoenix (Senate seats in Texas and Arizona were also considered Democratic targets this year).

“Every area in metro Atlanta is growing,” state Rep. Angelika Kausche, a Democrat, recently told Vox. “People come here for the education, for the schools, for the quality of life.” That has brought legions of diverse, younger voters to Atlanta’s metro area.

As the New York Times recently reported, “white residents now make up fewer than three in five voters in Georgia, and a wave of migration to the Atlanta area over the past decade has added roughly three quarters of a million people to the state’s major Democratic stronghold.”

Amid the influx to the Atlanta suburbs, political observers in Georgia have been watching elections get closer and closer. In the 2018 governor’s race, Democrat Stacey Abrams lost to then-Secretary of State Brian Kemp by a little more than 50,000 votes — a scare for Georgia Republicans. Still, Perdue’s campaign believes the Republican’s ability to draw more votes will boost him in the runoff.

The runoff could prove difficult for Democrats to win; the party’s strategy in Southern states like Georgia involved harnessing the large voter turnout that typically accompanies presidential elections. It could be hard for the candidates to muster the same level of enthusiasm for these runoff elections, which has often given Republicans the edge in past years.

“We haven’t had many general runoffs. The one constant has been Republicans won all of them,” Bullock told Vox. “Republicans have done a better job of getting their voters back to the polls.”

But, he added, “There being two high-profile runoffs, this may help Democrats get their voters out.”

Abrams’s group Fair Fight and other voting rights groups like the New Georgia Project have been putting a ton of effort into registering and turning out Black voters at high rates this year. The state has already hit record registration levels, with about 7.6 million voters registered. And since early voting started, more than 2.7 million voters have cast ballots — at least 1 million of whom were Black.

“Georgia has by far the largest percentage of Black voters of any battleground state,” Abrams told Vox in a recent email interview.

Where the battle for control of the Senate stands

Georgia represents the narrowest of paths for Democrats to flip the Senate, and it could still be a tricky feat to pull off.

The North Carolina Senate race between Republican Sen. Thom Tillis and his Democratic challenger Cal Cunningham has also not been called and likely won’t be before November 12, which is the final date for mail-in ballots postmarked by Election Day to be received in that state. Votes are also still being counted in the Republican-leaning state of Alaska, which also has a contested Senate race (albeit one that Republicans are favored to win).

Democrats needed a net gain of three seats to flip the Senate to blue if Biden wins, which is looking more likely. The race for the Senate came down to 10 or so competitive races, but Republican incumbents won the vast majority of them.

As expected, Democrats lost Sen. Doug Jones’s seat in Alabama and flipped a Republican seat in Colorado. Democrats hung on to vulnerable incumbent Gary Peters’s seat in Michigan and are expected to flip another seat in Arizona, although Vox’s partner Decision Desk hasn’t yet called that race. Longtime Maine Sen. Susan Collins (R) won her race for reelection, a major blow to Democrats’ hopes of flipping the majority.

Democrats can afford to lose North Carolina only if they flip both Georgia seats. But it’s worth repeating just how tough this could be. Throughout the year, Democrats saw North Carolina as more competitive for them than Georgia. Even though Perdue hasn’t avoided a runoff, he has more votes than Ossoff. And runoff elections historically have been worse for Democrats because turnout will likely be lower than a high-turnout presidential election.

“If overtime is required when all of the votes have been counted, we’re ready, and we will win,” Perdue campaign manager Fry said in a statement.

“The votes are still being counted, but we are confident that Jon Ossoff’s historic performance in Georgia has forced Senator David Perdue to continue defending his indefensible record of unemployment, disease, and corruption,” Ossoff campaign manager Ellen Foster said.

The race in Georgia isn’t over yet.