The Hate U Give is equal parts coming-of-age drama and Black Lives Matter primer. It’s terrific. 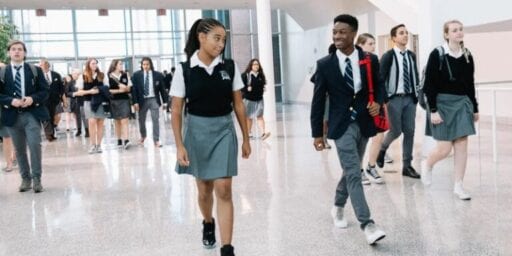 Share
Loading...
Angie Thomas’s novel The Hate U Give, about a teenage girl named Starr who sees her childhood friend shot and killed by police in front of her, was an instant hit when it came out in February 2017, debuting at the top of the New York Times young adult best-seller list and staying there for 50 weeks.

Thomas’s novel is based on a short story she wrote following the 2009 police shooting of Oscar Grant. Narrated by Starr, it captures a whole range of concerns and events that have animated the Black Lives Matter movement as well as broader American conversations about race: police shootings of young, unarmed black men; double consciousness and code-switching; “color-blind” white people; an asymmetrical justice system; gang violence; and a lot more.

But while art that ably functions as a primer to important social matters can often fall flat in its storytelling, The Hate U Give is as moving, funny, and riveting as its narrator, Starr — and the new movie based on the novel succeeds at least as much, if not better than, its source material.

Directed by George Tillman Jr. from a screenplay by Audrey Wells and with a truly outstanding cast, The Hate U Give has a great deal to say and no apologies to make about that, even as the film presents itself as a straightforward Hollywood drama. But it strikes a perfect balance between being a coming-of-age story nestled in a family narrative on the one hand, and a social drama on the other. And in never sacrificing either of those two interests, it becomes a strong example of both.

What makes The Hate U Give sing is that it’s told from the perspective of Starr Carter (Amandla Stenberg, in an absolutely riveting performance), a black teenager who’s well aware of the specific complications of her life. She lives in Garden Heights, a predominantly black neighborhood that’s home to more than its fair share of violence, but attends a mostly white private high school in another neighborhood called Williamson Prep.

Starr candidly explains that she’s one version of herself in Garden Heights and another one entirely at Williamson. As the only black girl in her class, she doesn’t want to be perceived as loud, aggressive, or difficult — even around her white best friend (Sabrina Carpenter) and her boyfriend, Chris (K.J. Apa), who is certain that he is “colorblind.”

But at home she can relax. She lives with her father, Maverick (Russell Hornsby), and mother, Lisa (Regina Hall), who had her when they were 17 and have stayed together against the odds. Her half-brother Seven (Lamar Johnson) and little brother Sekani (TJ Wright) live with them too.

Seven’s mother Iesha (Karan Kendrick) is the girlfriend of King (Anthony Mackie), who is also the head of a local gang, the King Lords. Maverick used to be King’s righthand man, but got out of the gang after taking the rap for one of King’s crimes and spending three years in prison. Now he owns the local grocery store in Garden Heights.

One night Starr goes to a party in Garden Heights, where she sees her childhood friend Khalil (Algee Smith). Years earlier, before she started going to school at Williamson, Khalil was her first crush and her first kiss. But they grew apart after Lisa enrolled Starr at Williamson, which happened following the death of Khalil and Starr’s other friend, Natasha.

When a fight breaks out at the party, Khalil offers to take Starr home in his car. On the way, they’re pulled over by a cop who shoots Khalil, mistaking his hairbrush for a gun. Khalil dies, sparking a national outrage. And Starr is not only traumatized but conflicted: Does she speak up, but risk attracting attention to herself and her family from the cops? Or — to make matters worse — when it turns out that Khalil was working with King in order to earn money for his family after his mother was diagnosed with cancer, should she worry about possibly snitching on King and bringing down the wrath of the King Lords on her family?

The Hate U Give is a sobering story, but it’s shot through with romance and lightness, too. Maverick and Lisa love one another, and their kids learn what love looks like from their openly affectionate parents. Starr knows what to look for in a boyfriend, and her relationship with Chris is complicated more by her efforts to navigate their differences than by anything he does.

And the movie skillfully weaves a number of genuinely laugh-out-loud scenes into its deadly serious story — like Chris trying to discern whether mac and cheese is a side dish or an entree — in a way that gives the whole thing humanity. After all, tragedy never exists purely in a vacuum, and laughter lets the audience relax into a happy domestic life for a moment before the movie reminds them that, in fact, these characters are fighting for their lives.

The key to pulling off a movie like this is to ground it with strong narrative rhythm and outstanding performances, rounding out the characters so the story seems less like an after-school special and more like a story about real people you might sit next to at a neighborhood restaurant or run into at the supermarket. In this, The Hate U Give succeeds spectacularly. It’s anchored by Stenberg’s dynamic performance, but the rest of the cast is uniformly terrific, especially Hall and Hornsby as Starr’s loving, worried, angry, caring parents. Even the movie’s white characters — who are clearly stand-ins for ways that affluent white people often tend to think about race — feel less like the cardboard cutouts they could have been and more like real people, by dint of good writing.

With these sorts of characters in play, the many issues The Hate U Give touches on come vibrantly to life. A protest late in the film (led by an activist and attorney played by Issa Rae) is the film’s fiery culmination, but its beating heart is a pair of scenes in which Starr confronts her cop uncle, Carlos (Common), about the complicated internalized racism he experiences as a police officer, and then later as she finally finds her voice and a way to turn her personal tragedies into words of that could actually effect change.

Ultimately, that’s The Hate U Give’s main theme: that a girl like Starr, should she find her voice, could use it powerful, life-saving ways. It’s a recurring theme in young adult literature, but it feels like it translates even more forcefully to the screen, where we can watch and hear Starr scream the truth about her murdered friend, but also laugh with her family. In turning the novel into a family drama with vibrant urgency, Tillman and his cast have given Starr her own voice — while also giving a voice to the urgent matter of racial justice in America, which deserves full attention and rich, dynamic stories like this one.

The Hate U Give premiered at the Toronto International Film Festival in September and opens in theaters on October 19.

Why bird nests aren’t covered in poop, explained to kids
A Covid-19 reading list for March 25
The scolding is not working
The rise of fear-based social media like Nextdoor, Citizen, and now Amazon’s Neighbors
How Fox News is playing fast and loose with American lives, illustrated by one Dr. Oz clip
10 ways to accelerate progress against climate change