The insect collector who gave us stop motion 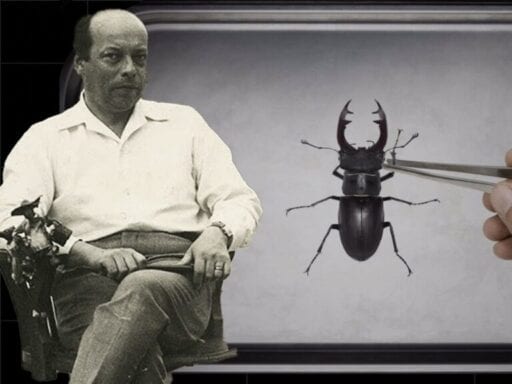 He collected beetles and changed the movies.

Insect adultery was the start of an animation revolution.

In this episode of Vox Almanac, I explore the delightfully strange beginning of stop motion animation. In a stop motion movie, an animator arranges an object, takes a picture, slightly adjusts the positioning, and then does it all over again. When the pictures are played in succession, it looks like motion. Though people have been experimenting with stop motion since the beginning of film, the new art really took off when an insect collector named Wladyslaw Starewicz wanted to see his beetles move.

As the above video shows, he employed technical innovations to do so, including strings that controlled his unusual puppets. He also occasionally replaced legs and augmented their bodies with wheels to enhance his stop motion process. The results are strange, hilarious, and changed the medium.

Starewicz went on to animate many other classics in the genre, influencing filmmakers like Terry Gilliam and Wes Anderson. And that legacy all started with the improbable story of cheating bugs and the museum director who loved them.

Beware companies that promote “buy one, give one” charity
“Racism may target Black people, but it damns a democracy and it damns humanity”
Breast cancer awareness products profit off survivors’ suffering
Republicans claim Democrats want to defund the police. Biden’s plan calls for more police.
Trump’s middle-class tax cut is a fairy tale that distracts from the real midterm stakes
What House Democrats actually want to do about climate change