The latest developments in the abuse allegations against Rep. Keith Ellison, explained 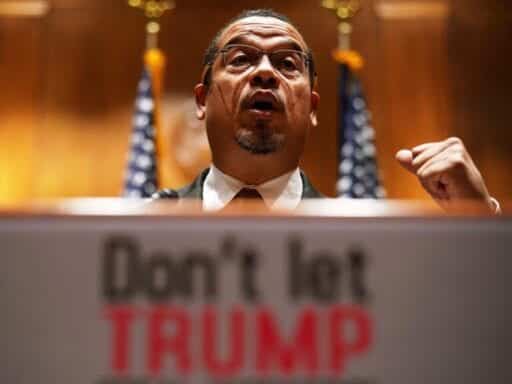 What they are and why they’re back in the news, explained.

In the days before Rep. Keith Ellison (D-MN) won a five-way Democratic primary for attorney general in Minnesota in August, he was accused of abuse by a former girlfriend — an accusation he continues to vehemently deny.

On August 11, the son of Ellison’s ex-girlfriend Karen Monahan wrote a lengthy Facebook post saying that he saw a video of Ellison grabbing his mother and swearing at her in a bedroom. Last week, Monahan released patient progress notes taken by a doctor that mentioned she had reported she was in a physically and emotionally abusive relationship — and identified her abusive partner as Ellison.

The document does indeed show that Monahan said she was in an abusive relationship, but the doctor notes that “she did not have any physical injuries that required a physical examination in the past.”

@MSNBC @CNN @CBSNews
Here is one of my Dr visits stating the abuse that occurred.
It amazes me the measures people have to take for their humanity to be validated. #metoo pic.twitter.com/7J0U5qwH4n

The issue is popping up in the news again with Monahan’s recent release of her medical notes, as well an issue that has nothing to do with either Monahan or Ellison: the sexual assault allegations swirling around Supreme Court nominee Brett Kavanaugh. Facing a huge scandal within their own ranks, Republicans are furious at Democrats and pointing fingers, asking why Dems don’t investigate abuse allegations against one of their own.

What we know about the August allegations

On August 11, Austin Monahan, the son of Ellison’s ex-girlfriend Karen Monahan, wrote on Facebook that he’d seen video of Ellison abusing his mother.

Karen Monahan had been posting for weeks on social media about an abusive relationship in her past, but she hadn’t named the man. She confirmed her son’s statement in a follow-up tweet, mentioning Ellison and adding, “you know you did that to me.”

“Karen and I were in a long-term relationship which ended in 2016, and I still care deeply for her well-being,” Ellison said in his original statement.

Monahan also released a lengthy statement to the local outlet Fox 9, painting a picture of a long-term relationship that was emotionally abusive and had taken a physical toll by the time she left Ellison in January 2017. In her statement, she said the relationship had been detrimental to her mental health and resulted in “complex PTSD.”

In the post, Monahan alleged that Ellison was unfaithful and characterized his behavior as “pathological lying, cheating,” and “smearing my name.” She also talked about the specific incident of alleged abuse, which she said occurred in 2016:

Monahan’s August allegations were the second time Ellison had been publicly accused of domestic violence. Another woman, Amy Louise Alexander, said in 2006 that Ellison verbally abused her while they were having an affair. She also said he grabbed and pushed her during an argument. Ellison denied ever having a relationship with her.

There are several similarities between the accounts: Both women were involved in Minnesota progressive politics, and they described Ellison losing his temper and using threats, verbal harassment, and violence.

But unlike other instances in the #MeToo era, where media outlets — in many cases — have asserted that women endured sexual harassment, assault, or other abusive behavior, the media has been much more ambivalent about saying whether either Monahan’s or Alexander’s claims are reliable.

Reporters at local and national outlets still haven’t been able to review the video evidence Monahan has pointed to (and still claims to have) and thereby confirm whether the alleged abuse took place. Monahan has not released the video that she and her son say exists, although she threatened Ellison with doing so in a recent tweet, in which she said, “You know I have the video and more.”

While Monahan released dozens of text messages in August that she and Ellison sent to each other, they don’t specifically corroborate violence or verbal abuse. Some texts are obviously cropped in the middle of an exchange. And though she has documentation of reporting past domestic abuse to a doctor, the doctor doesn’t document any physical evidence to corroborate her claim.

In other words, the situation between Ellison and Monahan is essentially still a “he said, she said” situation where she has accused him of abuse and he has categorically denied everything. Ellison so far is not feeling the pressure to leave his race, even though he recently told a local Minnesota news station he could not be sure more allegations wouldn’t come out.

“Look, you know, in this political environment, you know, I don’t know what somebody might cook up,” Ellison told the local TV station WCCO. “But I can tell you that there is absolutely nobody that I’m aware of … who’s threatening or suggesting or has ever made a prior accusation.”

The Ellison allegations are cropping up as Republicans deal with Kavanaugh

Even with Monahan’s public allegations hitting two days before the state attorney general primary in August, Ellison sailed through to victory. Now, it’s hard to say what impact the allegations will have on the general election. Ellison is currently leading Republican Doug Wardlow, 41 percent to 36 percent in a September Minneapolis Star-Tribune poll, and is showing no signs he’ll exit the race.

As two women — Christine Blasey Ford and Deborah Ramirez — have gone public with their stories of sexual misconduct by Kavanaugh, the judge’s confirmation to the Supreme Court is on shaky ground. Some Republicans have called the allegations a “smear campaign” and are asking why Democrats aren’t investigating allegations into some of their prominent members — notably, Ellison, who is also the vice chair of the Democratic National Committee.

Senate Democrats made a quick example of former Sen. Al Franken (D-MN) after eight women came forward to accuse him of inappropriately touching them or trying to kiss them without their consent. Franken initially didn’t want to resign, but after pressure from his own party, he stepped down.

That’s caused plenty of heartache among Franken fans, but there are plenty of others — including Vox’s Matt Yglesias — who argue that Democrats made the right choice, and would have looked like huge hypocrites in any situation where a high-profile Republican was accused of assault if Franken were still walking around the halls of the Senate.

With a question mark hanging over the Ellison allegations, Republicans are pouncing. But it’s worth noting that some Democrats, including Sen. Mazie Hirono (D-HI), also want Ellison to be investigated, especially given his high-profile position as vice chair of the DNC.

Whether that investigation will happen is an open question, as is whether Ellison can win his race for attorney general with the allegations hanging over his head.