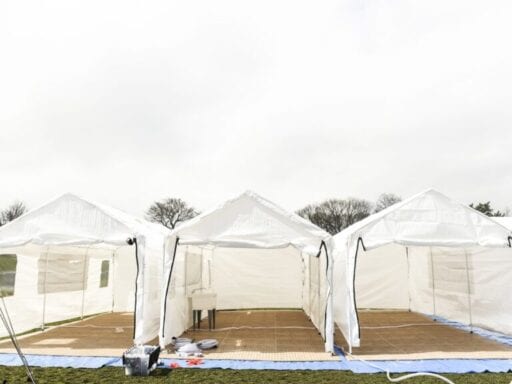 Share
Loading...
An emergency field hospital to aid in the coronavirus pandemic is being set up in New York City’s Central Park on March 30, 2020. | Stephanie Keith/Getty Images

“Has anybody decided to shut down the economy for six months every year for flu season?”

Constitutional law professor Richard Epstein injected an idea that is still lurking in conservative media coverage of the federal government’s response to Covid-19 — that American deaths won’t be nearly as high as scientists predict, meaning the cure — slowing the economy — might be worse than the virus. Three thousand American deaths later, he’s standing by his basic argument, telling me that shutting down the economy was a “totally catastrophic strategy” for a pandemic he still compares to a “normal flu season.”

In his view, lockdowns are examples of progressive political theory, which he told me was a “dangerous form of political ideology.” On March 30, he wrote that the best course of action would be to “ease restrictions as quickly as possible in those areas where the risks are lower, as a “Fortress America” approach, as he termed it, “may turn out to be more deadly than the coronavirus itself.”

Epstein is a respected libertarian legal scholar who has long railed against the aggressive use of government to impact public health outcomes. But he’s not an economist. He’s not a statistician. He’s not a doctor. He’s not an infectious disease expert. Still, the conservative Hoover Institute published a piece he wrote challenging scientific modeling predicting millions of American deaths, claiming that just 500 Americans would die. (When the death toll surged past 500, he followed up but maintained the predicted number of likely deaths can’t possibly be true, adding that the virus should be allowed to “run its course” to help the economy.)

His work inspired President Donald Trump to pivot from an aggressive call to social distance to talking about filling pews on Easter Sunday. “We can’t have the cure be worse than the problem,” the president said last Monday, adding, “We have to open our country because that causes problems that, in my opinion, could be far bigger problems.” That set off major alarm bells among public health experts.

As deaths surged past 3,000 this week, Trump has dropped the calls to get back to normal. But the mixed messaging and potentially wasted time has worried public health officials that the saga hampered the public health response.

America gets its #Rasputin moment. Just heard some of the lunatic ravings of @RichardAEpstein on #coronavirus, with basic facts about virology, evolution, immune response 100% wrong. And he’s got the ear of the White House. Be afraid. Be very afraid. https://t.co/KreBMKhoj4

I called Epstein on Wednesday, March 25, to ask about his math error regarding the potential death toll and what, if anything he’d change about his recommendations regarding the pandemic response.

Epstein was somewhat combative during our conversation, saying that coronavirus is not more contagious than the flu and still committed to the idea that the economic fallout of the pandemic — particularly in a lockdown scenario — would be far more dangerous than the pandemic. He has also argued elsewhere that there may be different forms of the virus circulating, a theory which medical experts say lacks evidence.

He made it clear in our conversation that his views are influenced by his disdain for “Big Government” policies, comparing the response to coronavirus to the arguments made by some regarding action taken against climate change. As he wrote in his follow-up piece for the Hoover Institution, “Progressives think they can run everyone’s lives through central planning, but the state of the economy suggests otherwise.”

This interview has been edited for clarity and length.

You’ve written two pieces making the case that the government is over-responding to the coronavirus, doing far too much damage to the economy than necessary. In your view, overreacting is just as dangerous as under-reacting because, as you say, there are lost lives on both sides of the equation.

Both sides, absolutely. [Note: in his March 30 piece for the Hoover Institution, Epstein wrote, “Looking at the costs, the public commands have led to a crash in the stock market, and may only save a small fraction of the lives that are at risk. In addition, there are lost lives on both sides of the equation as many people will now find it more difficult to see a doctor, get regular exercise, stay sober, and eat healthily.”]

And you’ve based your argument, in part, on what’s unfolding in South Korea, where the virus has killed far fewer people than models might suggest. But public health experts say testing in South Korea has been far more pervasive than it has been …

The problem there is a different problem and it’s the problem of cultural differences.

I projected a model, essentially without any government intervention at all. I said that the adaptive responses would be fairly dramatic.

If it turns out that these curves are working the way that I’m doing, you are wildly over investing in the lockdown side. You tell this to these standard docs, they don’t even know what it’s about. I teach medical people all the time and they are trained for diagnosis and they make their money in procedures.

It’s also a matter of progressive politics, which, as you know, I regard as an extremely dangerous form of political ideology because these people are much more inclined to big government, much more inclined to see things as always being out of the ordinary, always reading small changes as though they’re about to become exponential ones.

This is true with respect to climate change and it’s true with respect to this, and so, since they have the exponential model, they think that the costs of delay are absolutely tragically high. If you took the conventional model that I did, you would treat this just the way you did the flu that we had in 2009-2010, which turned out to be normal.

So I’m sitting here in this very odd position of being a lawyer, believing that there’s been a misidentification of what it is that counts as field expertise, plus a jaundiced view of lawyers that all we know how to do is to argue in court, right? Well, I’m not a lawyer, I’m a law professor.

You shut down three major states and a bunch of interstate activities and you can already see that the only guys who benefit are Amazon and Walmart because of their home delivery services. You want to do this in 50 states? It’s a complete catastrophe.

You’ve got a $25 billion economy. They’re trying to give you $2 trillion in stimulus. That’s not real production, that’s a wealth transfer. Wealth transfers always make you, in aggregate, poorer and not richer, in wealth. You just hope the short-term utility gains from the transfer will offset the long-term wealth effects, which is the basic theory you have to go on for these things to work, but you can only do it once.

Stimulus programs, by the way, it doesn’t matter whether you have a financial meltdown or a biological meltdown, it’s the same basic logic. The case for them rests strictly on the notion that short-term benefits of money, in utility terms, are much higher so that the normal relationship between utility and wealth is completely distorted.

But now you’ve got $2 billion of extra money. Where’s it coming from? You could print it. Well, if you always make money by printing it, we’d have hyperinflation. You can borrow it, but then somebody has to pay the interest. You could raise taxes, but that’s not going to happen.

So how do you think about risk in this?

That’s the whole point. That’s the only thing I’m thinking about, is risk.

We know, to a certainty of about 90 percent, that the shutdown is going to wreck the economy in the short run, right? We know [when] you wreck an economy, one portion of the economy you’re going to wreck is the health service system. So people who need diagnoses, routine breast cancer checks, new glasses and whatever it is, they’re not getting it.

If I’m correct in what I said, the dominant model has about a one percent chance of being true, and my model, forget about the differences, is essentially you’re talking about normal flu season, 30,000 to 50,000 deaths, is 99 percent true. Has anybody decided to shut down the economy for six months every year for flu season?

No, you’re getting confused again. It is not more contagious. [Note: Covid-19 is believed to be twice as contagious as the flu.] It is said to be more lethal. Now, there’s a recent piece in, I think it’s the Financial Times, that somebody sent me, which is, if you’re talking about this as being more lethal, right? Say it’s eight times as deadly, how do you factor that into the equation, right? Well, the first thing is though, is, if it’s true, which it probably is not, that number is probably high.

So, the betting is why is this virus different from all other viruses? I keep calling this the Passover question and they keep telling me, “Well, it’s got a slightly different structure.”

So what’s happening is, researchers see this thing, basically, collapsing earlier than they previously predicted. They’re coming much closer to me. I don’t know when the peak will be. I’m not a master statistician. I know how to draw curves and figure out the relationships.

Trump’s Republican Party, explained in one photo
The Trump administration forced Apple to turn over lawmakers’ data. Democrats are outraged.
You don’t have to love Star Wars to dig The Mandalorian
What’s up with Bran and the Night King? Is Bran the Night King? Maybe!
The unbearable grief of Black mothers
Top Putin critic Alexei Navalny was poisoned with Novichok, German government says