The many places you can buy Beyond Meat and Impossible Foods, in one chart 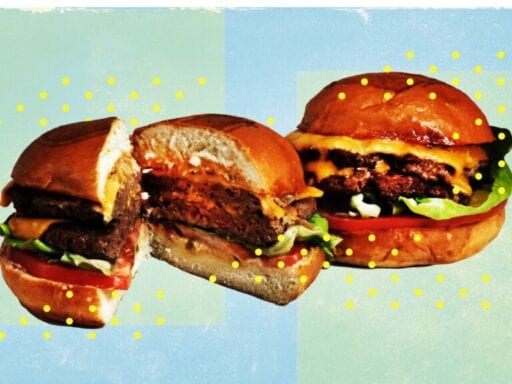 Now that it tastes like (or close to) the real thing, meatless meat has become mega-popular. You no longer need to choose between your desire to enjoy a delicious burger and your desire to spare animals or the environment from harm. That’s thanks, in large part, to two companies.

Beyond Meat has been selling its plant-based meat products in restaurants like Subway and grocery stores like Whole Foods. Its competitor, Impossible Foods, has snagged major deals with restaurant chains like Burger King, but it was long locked out of the retail market as one of its key ingredients awaited regulatory approval. That approval has finally arrived, and last month Impossible hit select supermarkets.

With both Beyond and Impossible now present in food-service and retail markets, alt-meat is easier than ever to get your hands on. But it’s not always easy to figure out exactly where it’s on sale.

We’ve fixed that for you. Here in one convenient package are the many US restaurants and grocery stores where you can find Impossible and Beyond as of right now. We’ll keep updating as the products become available in more places, so make sure to check back soon.

An important caveat: The restaurants and stores listed above have a minimum of 15 locations selling Beyond Meat or Impossible Foods, but some of their locations may not be carrying the products, and even the ones that do may sometimes be sold out. So before you head off to a specific location, it’s worth calling ahead to make sure they have your alt-meat product of choice in stock.

The mainstreaming of meatless meat, explained

On one level, the growing popularity of plant-based meat shouldn’t come as a surprise. After all, this is an innovation that comes bearing three promises for which the public is very hungry.

First is the promise that the rise of meat alternatives could help us fight global warming by reducing the number of methane-producing cattle and the amount of land used for grazing. Second, switching to plant-based meat could help save hundreds of thousands of animals from suffering on factory farms. And then there’s the idea that a more plant-heavy diet is healthier for us, not least because it’ll help us combat risks like antibiotic resistance.

Yet, when you think about it, it’s still astounding how quickly the new wave of meatless meat has gone from the niche purview of vegans and vegetarians to mainstream acceptance and even devoted fandom. Three years ago, few people were talking about Impossible Foods and Beyond Meat. Now, many foodies see their products as not merely tolerable but actually trendy (although there’s also a backlash against the products, with some critics saying they’re too processed and unhealthy).

Beyond Meat has always courted popular attention by focusing first and foremost on the deliciousness of its products. Founder and CEO Ethan Brown became a vegan after questioning why we extend moral concern to some types of animals but not others, but he told me, “I have a strong commitment to meeting people where they are.”

Brown says 93 percent of consumers putting Beyond Meat in their basket at the store are also putting in some type of meat product. That’s not a problem to him — on the contrary, he’s proud of that statistic. It shows that plant-based meat doesn’t only appeal to vegans like him. “I’m so sensitive to not being seen as extreme,” he told me. “We’re all about mainstream.”

Judging by the public’s reaction, that approach seems to have paid off. To pick just one recent example: When a single KFC franchise in Atlanta began offering meatless chicken from Beyond Meat, it sold out almost immediately. The line that formed outside the store was reminiscent of past queues for food trends like cronuts.

Importantly, Beyond Meat also got into the retail space as soon as it could — and it was aggressive about the placement of its products there.

“For decades, these products [meatless burgers] were carried in the vegan or vegetarian section of the frozen aisle that most consumers didn’t even see,” explained Alison Rabschnuk, the director of corporate engagement at the Good Food Institute. “But Beyond Meat demanded that their products be carried in the meat counter. So now consumers are faced with a choice that they didn’t know they had before.”

It’s similar to the trajectory we’ve seen with plant-based milk, which had been around for decades before gaining mainstream popularity. “What changed the game is, about 20 years ago one of the companies decided to put the shelf-stable milk into a gable top milk carton and ask a retailer to put it in the dairy case,” Rabschnuk said. “Sales went through the roof — and the rest is history.”

Plant-based milk now makes up 13 percent of the total milk market. And in this chart from the Good Food Institute, you can see that plant-based milk currently dominates the whole plant-based space — though experts like Rabschnuk say there’s good reason to think alt-meat will catch up.

As for Impossible Foods, getting into the retail space was quite literally impossible for a long time. That’s because its products are made with heme, a protein that Impossible sources from soy leghemoglobin, which is found naturally in soybean roots. That key ingredient is what allows Impossible to mimic the texture of real meat, even making its burgers appear to “bleed” just like beef. But until recently, the Food and Drug Administration didn’t approve it for sale unless it was already cooked, which is why you had to get it from restaurants.

While Impossible worked with the FDA to get soy leghemoglobin approved, the company did what it could to make its products take off in restaurants. Its strategy was to court the food-famous, which could lend its product cultural capital. In 2016, it appealed to well-known restaurateur David Chang, whose New York City restaurant Nishi became the first to serve the Impossible Burger. As Eater’s Monica Burton explained:

Impossible also employed a shrewd campaign that emphasized high-end gloss. It recruited celebrity investors like Jay-Z and Serena Williams and placed famous chefs and restaurants — not grocery stores, direct-to-consumer subscriptions, or university cafeterias — at the center of its strategy. Impossible became the faux-meat burger “worthy” of meat-loving chefs.

Even the fact that Impossible has sometimes been unable to keep up with the demand for its burgers has arguably helped lend them the sheen of coolness: After all, scarcity only makes a product seem more desirable.

An important inflection point came this spring, when the Impossible Whopper went on sale at a few dozen Burger Kings in the St. Louis area. That trial run eventually gave way to the Impossible Whopper being sold in more than 7,000 Burger King branches across the country. If Impossible’s alt-meat had previously been perceived as the province of elite foodies, it was now becoming increasingly obvious that this beefless burger was for everyone.

“These products are becoming normalized,” Rabschnuk said. “Having Burger King carry the Impossible Whopper is a way to show all kinds of consumers, from every socioeconomic and geographic sector, that there are alternatives — and they do taste as good.”

Surprisingly slow to jump on the alt-meat bandwagon has been the big kahuna of the fast-food world, McDonald’s. The chain has so far declined to add a meatless option to its branches in the US, despite a Change.org petition that’s garnered more than 230,000 signatures. However, last month McDonald’s announced it would test Beyond burgers in Canada. In Europe, the chain has already released the McVegan burger and vegan McNuggets.

It’s probably only a matter of time before McDonald’s lets alt-meat in through its golden arches in the US, too. It’s just good business sense, because consumers are increasingly seeking out meat alternatives. Take a look at this Good Food Institute chart showing the tremendous growth of plant-based meat over the past three years:

Plant-based meat is clearly a growing market, but to put things in perspective, it’s important to note that it still only accounts for 2 percent of retail packaged meat sales. It’s got a long way to go before it can make a big impact on issues like the climate crisis. However, if the trajectory we saw with plant-based dairy is any indication, there’s good reason to think alt-meat’s market share will keep on climbing.

“This is the first time when consumers don’t have to give up anything. In the past you might’ve felt strongly about health or animal welfare or sustainability, but then you had to make a sacrifice on taste,” Rabschnuk said. “Now it’s a win-win. You can have your burger and eat it too.”

For those who prefer to view all the restaurants and grocery stores in list form, here you go: