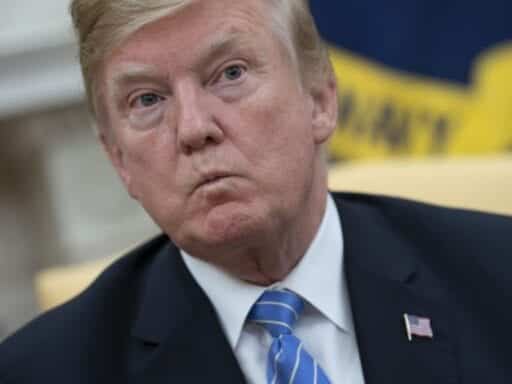 An official proclamation from the Trump Manual of Style: It’s “for emphasis.”

Trump’s tweets remain a strange, but inescapable part of his presidency. His social media account creates news and comments directly on it, usually with his trademark style of exclamation points, random quotation marks, all those nicknames — sometimes with a few typos thrown in.

But on Tuesday, Trump suggested that this was intentional, at least when it came to his penchant for random capitalization. “It should be noted that the Fake News constantly likes to pour over my tweets looking for a mistake,” Trump said. “I capitalize certain words only for emphasis, not b/c they should be capitalized!”

After having written many best selling books, and somewhat priding myself on my ability to write, it should be noted that the Fake News constantly likes to pour over my tweets looking for a mistake. I capitalize certain words only for emphasis, not b/c they should be capitalized!

This tweet, as promised, gave people something to, er, “pour over.”

‘pore over’ “to read or study very carefully”

‘comb over’ ‍♂️”to comb hair from the side of the head to cover the bald spot”https://t.co/br20fgpmAb

Observers of the president doubted that Trump himself wrote this tweet. Indeed, Trump doesn’t always write his own tweets, but they do seem to be the clearest window into his psyche and mood. And as the Boston Globe reported in May, his staff mimics his distinctive style — random capitalization and all. “Some staff members even relish the scoldings Trump gets from elites shocked by the Trumpian language they strive to imitate, believing that debates over presidential typos fortify the belief within his base that he has the common touch,” the Globe’s Annie Linskey wrote.

The typos aren’t always intentional, but his tweets are intended to echo the president’s freewheeling style. And as Trump (or Trump’s tweet writers) explained, all the capitalization does serve a purpose: to emphasize words and get his point across to his followers, and the haters and the losers. “Fake News” often gets such treatment, as do words such as “Border,” “Crime,” and “Rigged.” Phrases such as “WITCH HUNT” often get the full caps-lock treatment.

All of which goes to say: Yes! This Reporter knows she just Played right into Trump’s Hands.