The mystery boy in the To All the Boys I’ve Loved Before post-credits scene, explained 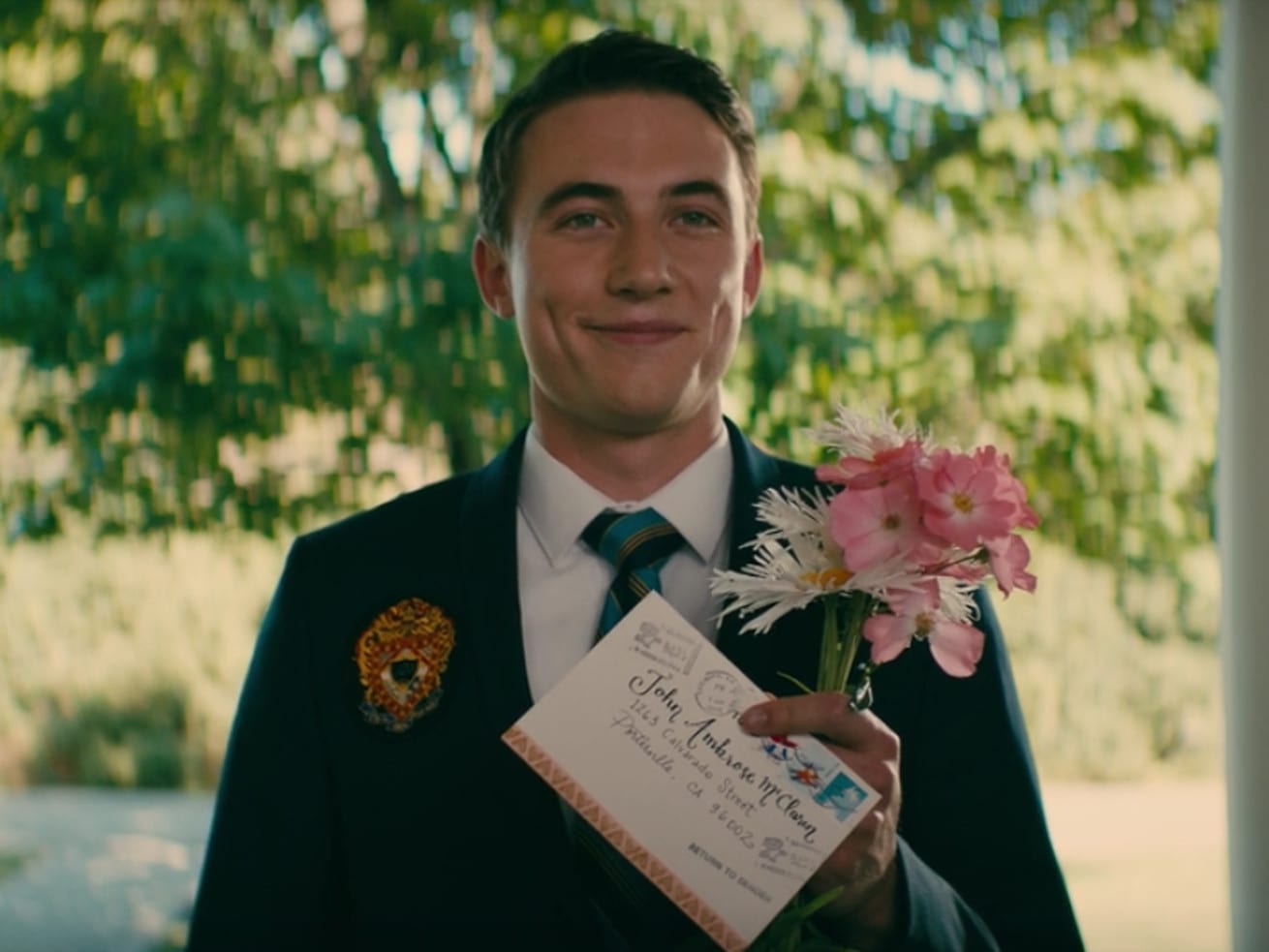 Plus the rest of our outstanding questions from the movie, answered by the books.

To All the Boys I’ve Loved Before, the candy-colored confection that is Netflix’s latest surprise hit, is a near-perfect teen movie. But after we finished watching it a few times (okay, a lot of times), we found ourselves with a few unanswered questions. Who was that at the door in the post-credit scene? Did Gen really leak the tapes? And what happened to Lara Jean’s scrunchie?

Luckily, there’s a resource out there that can answer these questions: the books. To All the Boys I’ve Loved Before is based on a series of best-selling novels by Jenny Han, and the three volumes go into detail on the answers to some of the most pressing questions the movie raised.

Here are our biggest questions from the movie, and the answers we found in the books.

Who is that in the To All the Boys I’ve Loved Before post-credit scene?

As the credits roll, the doorbell of the Covey house rings one last time. And standing poised in the doorway, clutching a bouquet of flowers and a calligraphy-embellished envelope, is what looks a lot like a grown-up version of John Ambrose McClaren, the boy to whom Lara Jean briefly lost her heart during Model UN and the recipient of her fifth love letter.

But as book fans know, there’s a lot more to John Ambrose than just the Model UN. And if Netflix does decide to make a sequel, as it is reportedly considering, John Ambrose will most likely play a major part in what comes next.

In Jenny Han’s To All the Boys I’ve Loved Before, Lara Jean looks back most fondly on her John Ambrose crush, despite the fact that he moved to another school district before high school. In the book, it was John, not Peter, who kissed Lara Jean during a game of spin the bottle.

So when Lara Jean begins to fear that she is getting too involved in her fake relationship with Peter, she decides to redirect her crush energies toward John Ambrose, even tracking him down to spy on him during a Model UN tournament just before that fateful ski trip. (“Wow. The body ain’t even cold yet,” says Peter when he learns of Lara Jean’s plans.) She gets too nervous to talk to him and runs away at the last minute, but that isn’t the last we see of John Ambrose by far.

In Han’s second book, P.S. I Still Love You, John Ambrose responds to Lara Jean’s letter with a letter of his own, confessing that he nursed a reciprocal crush on her back in eighth grade, and that he wished that he had worked up the nerve to ask her to the eighth grade formal.

To hopeless romantic Lara Jean, this confession is catnip, and when her relationship with Peter founders (she’s concerned that he’s still hung up on Genevieve), John Ambrose becomes an attractive alternative. In fact, as the book goes on, John Ambrose manages to become a more formidable rival for Peter Kavinsky than poor Josh ever quite was.

In an interview with Entertainment Tonight, To All the Boys I’ve Loved Before director Susan Johnson hinted that she would like to see John Ambrose in the movie’s potential sequel. “Relationships are hard to navigate and [Peter and Lara Jean will] find themselves in one,” she said. “And they’ll discover what the next person might bring in John Ambrose McClaren.”

Who leaked the tape?

Toward the end of the movie, a video emerges on the internet of Lara Jean and Peter making out in a hot tub, with everything framed so that it looks like they’re having sex. Lara Jean is sure that Gen leaked the tape, but when she confronts her, Gen denies everything convincingly, twice. But by the end of the movie, no other plausible candidate for leaking the tape has emerged.

So, who actually leaked the not-sex tape?

We don’t know for sure where the movies might go with this storyline, but in the books, it’s clear that it was Gen who leaked the tape, and the leak is part of an escalating series of hostilities she has engineered against Lara Jean.

First, in book one, she spreads a rumor that Lara Jean and Peter had sex in the hot tub. Once the fallout dies down in book two, she puts the tape online. And after the tape is banned from the school campus, she turns it into a meme — GIFing it, photoshopping in cat heads, adding soundtracks — and makes it inescapable.

If you’re thinking that seems like a lot of work on Gen’s part for a petty high school feud, well, you’d be correct. But in the books, Han does just enough work on Gen’s backstory to maybe sort of almost justify it.

Why does Gen hate Lara Jean so much?

In the movie, Gen reveals that she despises Lara Jean because way back in seventh grade, before Gen and Peter ever dated, Lara Jean kissed him at a party.

“It was spin the bottle, you psycho, and it was tongueless!” Lara Jean protests.

“Well, it wasn’t tongueless to me!” Gen responds.

That version of the Lara Jean/Genevieve backstory might not be quite enough to support a grudge that spans multiple years and multiple movies: After all, by kissing Peter during spin the bottle, Lara Jean did absolutely nothing but follow the rules of the game she was playing. She even offered to spin the bottle again when it landed on Peter. Gen comes off as a petty sociopath for still being so mad about it four years later.

But in the books, Genevieve has a little more reason for her hatred, and that makes her an effective antagonist throughout the first two books in the trilogy.

That’s because in the books, Lara Jean and Peter don’t kiss during a game of spin the bottle in seventh grade. Instead, it happens at a party at Gen’s house. They’re sitting on the couch waiting for their parents, the last two people to be picked up, and out of nowhere Peter informs Lara Jean that her hair smells like coconuts and then kisses her. (It was his first kiss, he admits at the end of the trilogy.)

And Gen, watching, is horrified. “You kissed Peter that day at my house in seventh grade,” she seethes at the end of the book. “You knew I liked him, but you kissed him anyway.”

This is another case where Lara Jean did absolutely nothing wrong — she neither initiated nor reciprocated the kiss and did nothing to break girl code — but if you squint a little, you can see why Gen would be mad.

Unlike the spin the bottle kiss in the movie, this kiss wasn’t a product of pure random chance. It was actively initiated by Peter, which means that in a way, it’s a rejection of Gen. And Gen can’t let herself be mad at Peter, because she’s still pursuing him, so she gets mad at blameless Lara Jean instead, convincing herself that Lara Jean just went for it with Gen’s crush and betrayed their friendship.

And that’s not Gen’s only reason to be jealous of Lara Jean. Lara Jean’s mother might be dead, but she has a loving father and two sisters she adores, and her family home is always warm and welcoming. Meanwhile, Gen’s father keeps cheating on her mother with progressively younger women. “Did you know that when we were kids, I used to wish I was you?” Gen asks Lara Jean. From Gen’s perspective, Lara Jean just keeps on taking the things that Gen wants.

The movie’s Peter Kavinsky is less of an arrogant jock than the book’s Peter, so it’s understandable that the movie would choose to rewrite that first kiss sequence. (Movie Peter would obvs seek consent before kissing a girl out of nowhere, even in seventh grade.)

But while even in the books it seems like Gen’s majorly overreacting by plotting elaborate multi-level revenge four years later, she does look slightly less petty in the books’ version of the story. Slightly.

Does Lara Jean ever get her favorite scrunchie back?

We don’t know. And to be honest, we’re still mad about that.