The perilous state of American democracy, in one photo 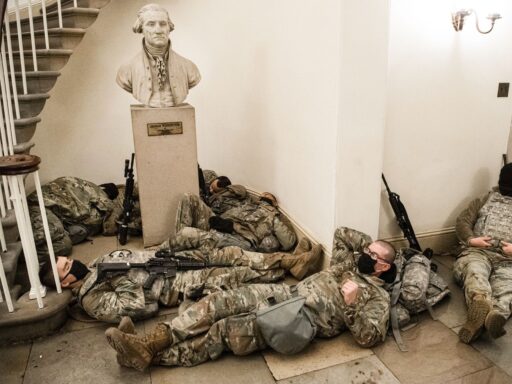 National Guard members are staying at the US Capitol to protect it from supporters of President Donald Trump.

If you want to get a sense of the perilous state of American democracy right now, look no further than the images circulating online showing National Guard members sleeping in the hallways of the US Capitol — underneath busts of Presidents George Washington and Abraham Lincoln, no less.

The troops aren’t staying overnight on the Hill because it’s comfortable. They’re there for an uncomfortable reason: to keep lawmakers safe as they debate whether to impeach President Donald Trump for a second time.

Here’s a similar image showing National Guard members on Wednesday getting some shuteye near Lincoln’s bust and a neighboring plaque. The plaque is worth dwelling on for a moment: It commemorates the volunteers who stayed over at the Capitol at Lincoln’s request on April 15, 1861. That was three days after the attack on Fort Sumter — the opening battle of the Civil War.

Asking for help in that moment of crisis, Lincoln appealed “to all loyal citizens to favor, facilitate, and aid this effort to maintain the honor, the integrity, and the existence of our National Union.”

In a sense, that’s what these National Guard members are doing now.

But Trump didn’t call on them; the secretary of the Army did, as he oversees all guard members operating in Washington, DC. But the roughly 15,000 citizens — some of them armed — are now tasked with protecting American democracy from the president and his supporters following the insurrection at the Capitol last week.

Beyond the Capitol, thousands of National Guard members have been called to Washington to help secure President-elect Joe Biden’s inauguration on January 20, and state capitols around the nation are beefing up their security forces in advance of planned days of protests.

It’s a stark moment in American history and a sign of just how precarious the peaceful transition of power from one president to the next — a cornerstone of American democracy — remains.

Trump cites fake polls to make the case that support for impeachment is falling
Black is King is Beyoncé’s stunning ode to African glory
An actor confronted Harvey Weinstein at a comedy show. Guess who got thrown out?
What are the symptoms of the new coronavirus?
The false promise of “renewable natural gas”
Mueller to Attorney General Barr: You “did not fully capture” my report

When will kids be able to get the Covid-19 vaccines?