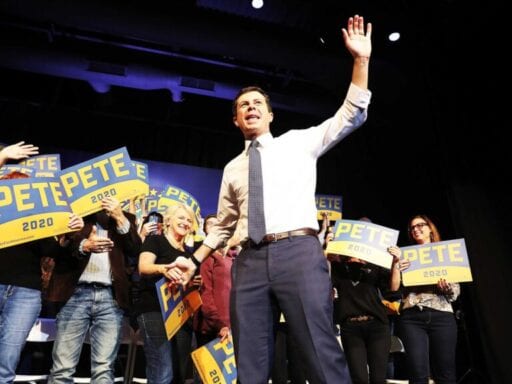 Buttigieg’s surge could to hit a major obstacle in South Carolina.

Pete Buttigieg is getting his second wind.

The South Bend, Indiana, mayor enjoyed an unexpectedly good start to his campaign — thanks in no small part to a wave of breathless media coverage — but then faded out of the top-tier contenders. Until now.

Capitalizing on steady momentum in Iowa, Buttigieg is now leading polls there, per a RealClearPolitics average of the state. He’s also on the rise in New Hampshire, although Sen. Elizabeth Warren and former Vice President Joe Biden both are slightly ahead. He also was treated like an ascendant frontrunner toward the later part of Wednesday night’s Democratic debate, fielding attacks from other candidates on stage.

The picture is starkly different in national polls, where Buttigieg hasn’t yet cracked double digits in the RealClearPolitics average. This discrepancy drives home a key point: Buttigieg is gaining popularity in the first two, overwhelmingly white early voting states, but he has yet to gain traction in more diverse states where Biden, Warren, and Sen. Bernie Sanders are still leading. He’s still at single digits in Nevada and South Carolina polling averages, and a recent Quinnipiac poll of South Carolina shows him at zero percent among black voters there.

Buttigieg’s campaign chalks the numbers gap up to the fact that his time spent in Iowa and New Hampshire has made his name recognition go up, and the campaign believes more time on the ground in other states will have the same effect.

“Pete has spent a lot of time in these places,” campaign spokesperson Chris Meagher told Vox. “One of the things we’ve found is the more people know Pete, the more they like him, so it’s continuing to introduce him to folks. He wasn’t a national figure. … Pete hasn’t spent the last 20 years marinating in Washington.”

Iowa and New Hampshire are key momentum drivers, but their demographics aren’t reflective of the US as a whole. Winning the Democratic nomination rests on winning over nonwhite voters. And so far, Buttigieg has had more than a few stumbles in his outreach attempts.

Over the past few weeks, Buttigieg slowly and surely has been gaining polling ground in Iowa, a state he’s spending a lot of time and resources on. His campaign has 100 staffers and 20 offices in the state, and his campaign is depending on a good result there. That’s about on par with the number of Iowa staffers Warren and Biden has, and fewer than Sanders.

“I think we plan on winning Iowa,” a Buttigieg campaign staffer told Vox. “Iowa can definitely be a jumping-off point to success down the road.”

The candidate’s real polling breakthrough in Iowa came last weekend, when the Des Moines Register/CNN/Mediacom poll conducted by veteran Iowa pollster Ann Selzer’s firm showed Buttigieg leading the pack at 25 percent, with Warren at 16 percent and Sanders and Biden each with 15 percent. An early November Monmouth University poll of Iowa also found him on top, albeit with a narrower lead.

Then on Tuesday, a New Hampshire poll by Saint Anselm College Survey Center showed Buttigieg suddenly in the lead in the Granite State. The New Hampshire poll had obvious caveats; it sampled 255 likely Democratic voters, and overrepresented voters who were college educated or had gone to graduate school — a demographic Buttigieg performs well with.

It’s worth pointing out the Buttigieg surge isn’t quite on par with Warren’s last month. He’s still in fourth place nationally, and has significant ground to make up in states that aren’t Iowa or New Hampshire.

Selzer’s main takeaway about why the top tier is constantly fluctuating is that voters are still uneasy about who can beat President Donald Trump in the general election. While Selzer’s Iowa poll showed Buttigieg is the most well-liked candidate right now, there are still concerns in the state about his general election viability.

“There’s a skittishness about the chances of these top four candidates,” she told Vox.

Buttigieg’s campaign has been building out an impressive organization in all four early states, pollsters and political experts told Vox. He’s been fundraising at a rapid clip and using that money to build out large teams in each states to be ready to capitalize on momentum if and when the dominoes start to fall.

“It’s not an apples to apples analogy, but it’s the same strategy Obama used in 2008 which is hope to do well in Iowa and then change the dynamic suddenly he’s the frontrunner, then does well in New Hampshire, and has the infrastructure to do well in Nevada,” said Jon Ralston, a Nevada political journalist and the dean of that state’s press corps.

Buttigieg is struggling with black voters

As well as Buttigieg might be doing in Iowa and New Hampshire this month, he still has a big problem: persuading black voters in South Carolina.

Multiple polls, including ones from Quinnipiac and Winthrop University, have shown Buttigieg at zero percent with South Carolina’s African American voters, who make up 60 percent of the state’s overall electorate.

Black political experts in the state told Vox that despite the Buttigieg campaign’s outreach to the community, voters are looking to black surrogates to vouch for Buttigieg personally. And so far, they’re not seeing much.

“The questions I continue to get asked is, ‘show me some other African Americans somewhere else in America who have Pete Buttigieg’s back,’” said Anton Gunn, Obama’s 2008 South Carolina political director, who is not affiliated with any current campaign. “Where are the other leaders in South Bend? If they’re not down here regularly, then that speaks volumes.”

South Carolina state Sen. Marlon Kimpson, who has not endorsed any candidate yet, told Vox he agrees that not a lot of people have heard of Buttigieg. And what they’ve heard isn’t necessarily positive, Kimpson added. Buttigieg has apologized for how he handled race relations as mayor of South Bend, including firing the city’s black police chief, and later criticized over an officer-involved shooting of a black man named Eric Logan.

“People don’t know him, and what they do know about him is not impressive in terms of his history on African American issues,” Kimpson said. “It did not help him having to spend weeks handling a racial incident in his own city, and the media exposing his record with respect to the lack of diversity with his chief positions in his own city.”

Buttigieg’s campaign has had more stumbles in its attempt to do outreach to black voters, including using a stock photo of a woman from Kenya on its plan to address racial inequality.

Furthermore, Kimpson said momentum in Iowa and New Hampshire likely won’t move the needle much for black voters in South Carolina, unless that momentum belongs to a black candidate like Cory Booker or Kamala Harris.

“I don’t think African Americans will be swayed by what happens in New Hampshire or Iowa,” he said. “Pete Buttigieg is not Barack Obama.”

Who was John McCain? The best answer is in this 18-year-old David Foster Wallace essay
Why the right to vote is not enshrined in the Constitution
Joe Sestak’s 2020 presidential campaign and policies, explained
This AI makes you look like a masterpiece — while teaching you about its own bias
Harvey Weinstein is the first major figure taken down by #MeToo to be convicted
A majority of Americans would back a Biden mask mandate