The potential consequences for Republicans who denied the election results, explained 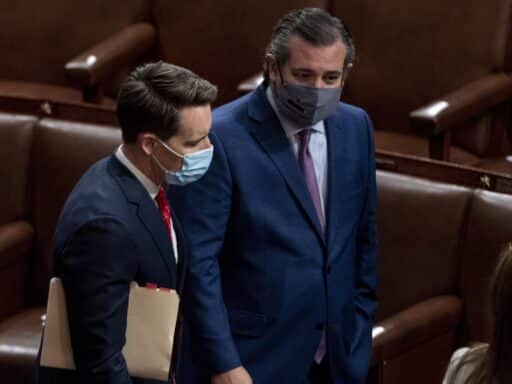 A growing group of Democrats are calling for the expulsion or censure of Republicans who objected to the results.

Last week, 147 Republican lawmakers objected to the presidential election results even after pro-Trump supporters eager to challenge the certification of the outcome mounted a violent insurrection at the Capitol.

Now a growing number of Democrats are arguing that these lawmakers — as well as President Donald Trump — need to face some serious consequences and take responsibility for their roles in inciting last week’s riot.

In the Senate, a total of eight Republicans refused to certify election results in Arizona or Pennsylvania as accurate, and in the House, 139 lawmakers did the same. Democrats say their positions, much like Trump’s, undercut trust in the democratic process and disregarded the will of the voters in both states. And like the president, by calling the election results illegitimate, they also helped stoke doubts about the election that fueled Wednesday’s violent assault.

As Cameron Peters has reported for Vox, multiple Democrats have called for Sens. Josh Hawley (R-MO) and Ted Cruz (R-TX) to resign, focusing on them in particular because they spearheaded efforts to contest the election results in the upper chamber.

In addition to urging Hawley and Cruz’s resignations, some Democrats have also raised the possibility of expulsion, and at the very least, censure, by the Senate. To expel a lawmaker, two-thirds of the Senate would have to vote to remove, and to censure someone, a simple majority would need to support this effort.

In the House, too, there’s been a similar push, including the recent introduction of a censure resolution by Reps. Tom Malinowski (D-NJ) and Debbie Wasserman Schultz (D-FL) that focuses specifically on Rep. Mo Brooks (R-AL), the Republican lawmaker who was the first to make his objection to the certification of election results public.

Brooks is also seen as more complicit in the insurrection than some of the other House Republicans given comments he made at the “Stop the Steal” rally. “Today is the day American patriots start taking down names and kicking ass,” he said during a speech at the event.

Beyond the resolution focused on Brooks, Rep. Cori Bush (D-MO) has introduced a separate measure that would initiate an investigation of House members’ conduct for potential expulsion. Two-thirds of the House is needed to expel a member, and a simple majority is required to back censure.

In addition to the disciplinary action they could face in Congress, several Republican members are also seeing massive fallout from donors and regional editorial boards, which are pressing them for accountability. Amazon, AT&T, and Mastercard are among the companies that have announced that, for the time being, they won’t be contributing to lawmakers who raised objections to the election result, according to Forbes. And editorial boards across the country including those of the Kansas City Star and the Houston Chronicle have urged key Congress members that were involved to resign.

Republicans are claiming they did nothing wrong

Lawmakers who’ve been the focus of these expulsion and censure efforts — including Cruz, Hawley, Brooks, and House Minority Leader Kevin McCarthy — have pushed back against demands for them to take responsibility, distancing themselves from the Trump supporters who stormed the Capitol, while arguing they were right to support the (false) claim that there were problems with the election result.

Cruz, in a tweet last week, claimed that he was leading a discussion about “election integrity” and was “in no way responsible for the despicable terrorists who attacked the Capitol yesterday.” And Hawley has said that he doesn’t regret backing the election objections. “I will never apologize for giving voice to the millions of Missourians and Americans who have concerns about the integrity of our elections,” he said in a statement.

Brooks, too, said he didn’t believe that remarks he had given urging people to fight alleged voter fraud were tied to the Capitol attack. “It never occurred to me anyone would engage in violence as a result of my speech or any others. I wanted people to go to protests. I saw what happened was horrible for the American public,” Brooks said in a television interview with an Alabama news station.

Despite what these lawmakers may want to argue, however, the unfounded allegations of fraud that Trump and his Republican allies have promoted for months directly contributed to the distrust of the election result that fueled the storming of the Capitol. More and more of their colleagues are now calling on them to face consequences.

Since Republicans are still arguing they did nothing wrong, there’s little chance of any resignations. This leaves Democrats with a couple of possibilities for disciplining their colleagues that differ slightly in the House and the Senate: expulsion, censure, and reprimand.

In the Senate, expulsion and censure are the only two options, and in the House, there’s the potential for expulsion, censure, or reprimand. For both chambers, two-thirds of lawmakers would need to vote to expel one of their colleagues — a high threshold that would require a significant number of Republicans to vote in favor of the measure, in either chamber. In the case of expulsions and censures, the House and Senate Ethics Committees have typically been involved in reviewing a lawmaker’s conduct and backing resolutions that outline disciplinary action.

Censure, meanwhile, only requires the support of a simple majority in both the Senate and the House, and the consequences vary. In the Senate, a censure formally condemns a lawmaker’s actions, and in the House, a censure means a lawmaker is effectively publicly shamed and admonished on the floor. Censures could also lead to a lawmaker losing committee and party leadership roles, though that depends on party leaders’ discretion in both chambers.

Censure — while far less severe than an expulsion — is also still relatively rare. According to a report from the Congressional Research Service, just 23 House lawmakers and 9 Senators have been censured as of 2016 for their treatment of other Congress members, financial misconduct, and disclosure of confidential information.

In the House, there’s also the potential for a lawmaker to be “reprimanded,” which would still require a simple majority vote but does not include a public admonishing by leaders in the chamber. Party leaders, separately, can discipline their own members outside of these options: Former Rep. Steve King (R-IA), for example, was removed from his committee posts by GOP leaders after making racist comments prior to broader House action. Members could also face fines for their conduct.

Given the narrow majorities that Democrats have in both chambers, censure is probably the most aggressive punishment that Republican lawmakers involved in the electoral objections could face from Congress, even though many Democrats don’t see it as a harsh enough response for their attempts to undermine democracy.

“Censure seems too trifling a punishment in this horrific case, but it’s the minimal level of accountability Congressman Brooks should face from the same Congress he goaded rioters to assault,” Wasserman Schultz said of a resolution pushing for Brooks’s censure.

Ultimately, lawmakers may face other significant consequences as well. Many Republicans, for instance, will have to explain their choices to constituents in the 2022 elections.

Odd Job: He lost his leg in Afghanistan. Now he reenacts that horrible day to train others for battl...
How to watch Emma, Onward, and other new movies you can suddenly view at home
What Trump actually proposed in his coronavirus speech
Does the Trump administration have a policy of separating families at the border?
The Innocence Files explores wrongful convictions. It’s the best kind of true crime.
Democrats have made a puzzling decision to drop their demand to end fossil fuel subsidies