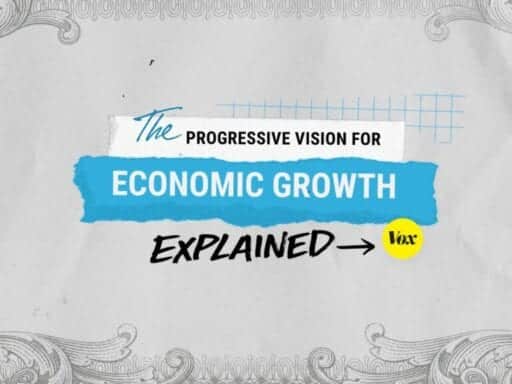 Democrats have a clear theory of how they’ll make the economy fairer, but do they have a theory for making it grow faster?

Republicans have dominated the narrative on economic growth in recent decades. The right-wing conventional wisdom has been that while government regulations and higher taxes might help save the whales and feed the poor, the real prescription for growing the economy is deregulation, tax cuts, and a pro-market bent. Then — voila — prosperity. President Donald Trump says “whether you love me or hate me, you have to vote for me” to keep the good times going.

In recent years, progressives have developed a critique of the Republican vision of growth: Even when the GDP numbers are strong, the prosperity isn’t being shared. Income inequality has exploded, wages have stagnated, and the richest Americans are hoarding wealth while everyone else struggles to keep up. In the landscape of supposed trickle-down economics, a lot of people are still waiting on that trickle.

“Growth where a relatively small portion of the population reaps all the gains from that growth, that’s not the idea of a healthy, fair, or just society,” said Darrick Hamilton, the executive director of the Kirwan Institute for the Study of Race and Ethnicity at Ohio State University. “Growth in and of itself says nothing about morality, common humanity, or sustainability.”

But a vision aimed more directly at economic growth is forming among progressives as well — one that entails restructuring markets to change how they work and who they reward, rather than simply redistributing their benefits after the fact. The argument Democrats are beginning to make is that growth is weaker than it could be because the markets themselves are rigged. To accelerate the economy, you’ve got to unrig the markets.

“The rules of the game make a big difference,” said Joseph Stiglitz, a Nobel laureate economist at Columbia University and author of People, Power, and Profits, a book outlining a vision for progressive capitalism.

What kind of economic growth are we really talking about?

Typically, we measure economic growth by gross domestic product (GDP), which is basically a measure of the goods and services produced in the US during a certain period of time and a sign of the health — or lack thereof — of the economy. The problem with that metric, many progressives say, is that it tells too basic a story and it misses nuances in the way people live.

“Many people implicitly assume that if there’s growth, then most people’s income will grow,” said UC Berkeley economist Gabriel Zucman in an email. “But this has no reason to be true, and indeed this is not what has happened since 1980: Over the last 40 years, average income per adult has grown 1.4 percent in the US, but for the bottom 50 percent of the income distribution, income has completely stagnated.”

According to Zucman’s research with fellow economists Thomas Piketty and Emmanuel Saez, from 1980 to 2014, only the top 10 percent of earners saw their incomes improve above the average for the rest of the country. For the bottom 90 percent, their incomes grew much more slowly.

There’s no single explanation for how this has happened but rather a litany of policies and decisions that, over time, have contributed to income stratification in the US. We’ve implemented tax systems and regulatory regimes that have often benefited corporations and the wealthy and taken a lax attitude toward fostering competition in business, meaning more power has been concentrated in the hands of fewer corporations. We’ve seen weaker unions, wage stagnation, less innovation, and lower productivity as a result.

The Center for Equitable Growth, a think tank based in Washington, DC, has argued that we need to “disaggregate growth.” They’ve called for a new way of measuring growth that’s cognizant of inequality, and congressional Democrats have proposed it in legislation. Though the bill has not advanced, the Commerce Department has said the Bureau of Economic Analysis is researching methods to develop such a measure and will publish a prototype in 2020.

More broadly, there is a sense on the left that the concept of growth has to encompass more. “Growth in median income, poverty rates, life expectancy, rates of morbidity, the employment to population ratio among prime-age adults — these measures seem equally important to me and by these metrics things have stalled even more than per capita income or are even going backward,” said Princeton economist Ilyana Kuziemko.

Beyond the issue of inequality and figuring out where growth is and isn’t happening, there’s the question of growth-fostering policies. Redistribution may help lift people out of poverty and make for a fairer society, but the economy ultimately sputters out without growth. You can’t give everyone bigger slices of a pie that isn’t getting bigger itself.

The economic puzzle of the era is that we feel like we’re living a moment of rapid technological change but productivity growth is actually slower than its post-war norm.

Part of the answer, argued Harvard economist Dani Rodrik in an email, is that innovation is being bottled up in a small set of firms — largely in metropolitan areas — while the rest of the economy falls behind. “The only way to make the economy grow faster is to make sure that the lagging regions, firms, and segments of workers are connected more tightly with the advanced sectors,” Rodrik said. “When that is done, we get both greater equity and more growth.”

Part of the strategy for growth on the left isn’t just boosting the economy but also removing some of the weights that are slowing it down: the cost of health care, student loan debt, and child poverty. “It’s very key, and it makes sense that making sure people have access to education and health and security has really great consequences, because then they roll off and benefit everyone in a growth manner,” said Roosevelt Institute fellow Mike Konczal.

Of course, the question of trade-offs is always in the background. The Green New Deal, for example, is not, on its face, a pro-growth plan. But progressives would argue that the effects of climate change aren’t being contemplated in GDP right now, and in the long term the consequences of climate change will be disastrous, both for people and economies. Nothing would do more for our future growth than preventing that catastrophe.

Of course, those on the conservative end of the spectrum are less than enthused by the progressive vision for economic growth. While a Republican agenda hasn’t injected the economy with an unprecedented level of prosperity in recent decades, they argue that a Democratic one won’t do that well, either — and that the approach progressives advocate is part of what is weighing the economy down.

Michael Strain, director of economic policy studies at the right-leaning American Enterprise Institute, told me he believes the left’s focus on inequality is “misplaced” and doesn’t solve the broader problem of productivity.

As for the idea that the market environment is so concentrated it’s stifling competition, critics note that the companies that dominate today took down firms that were previously considered to be unstoppable behemoths. Before there was Amazon, there was Walmart. Before there was the Apple iPhone, there was BlackBerry. Before Facebook, MySpace. Before Google, Netscape.

“There’s some whining about the current situation that comes from businesses who are not just losing because they’re not as efficient as some newer or bigger competitors,” said libertarian Harvard economist Jeffrey Miron. “But capitalism is not supposed to be helping the capitalist.”

There is a growing strain on the right, however, that is converging more with the left in the belief that corporate power and inequality are increasingly problematic and a more active role for government is important. Sen. Josh Hawley (R-MO) has emerged as a fierce critic of Big Tech, and Sen. Marco Rubio (R-FL) appears to have taken an interest in industrial policy.

“There’s a renewed interest in how you have a more active role of government in promoting key industries,” said Nell Abernathy, vice president of strategy and policy for the Roosevelt Institute, a progressive think tank.

Trump gives progressives the opportunity to think bigger on the economy; the question is whether they will take it

Democrats have for decades ceded much of the growth narrative to Republicans, who have over and over again tried to show that their formula works best. Except it doesn’t. Case in point: The GOP just spent $1.5 trillion on a tax cut that overwhelmingly benefited the wealthy and corporations, and it’s still not creating some giant bump in GDP, let alone addressing income inequality or boosting poor Americans as much as it is the rich.

“In almost every dimension, it slowed growth and increased inequality,” Stiglitz said.

But some on the left say that the price tag on the tax cuts is an argument for Democrats to think bigger. The conventional formula for growth hasn’t been working out in the past 40 years, and Democrats who have tried to work incrementally and find consensus with Republicans haven’t brought about much prosperity, either. Why not go for the structural change Elizabeth Warren is promoting? Or Bernie Sanders’s political revolution? Why not embrace aggressive measures and policies that could really change the economy, ideas that aren’t just focused on redistribution but also on growth?

“What we have demonstrated both from this Trump tax cut and the last Great Recession is the government has the capacity to do big things,” Hamilton said.

Don’t expect Facebook’s $550 million settlement to stop it from scanning your face
Florida, Arizona, Oklahoma primary elections: live results, news, and analysis
China’s puppet in Hong Kong
House Republicans’ impeachment stunt is an attempt to distract from the allegations against Trump
What Biden could do about family separations
The US-Saudi alliance is deeply unpopular with the American people