The protests are growing larger, calmer, and more community-oriented 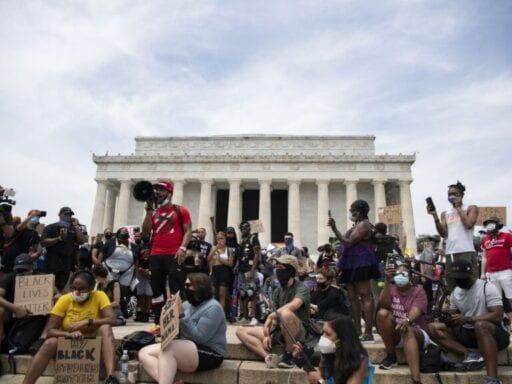 People gather on the steps of the Lincoln Memorial on Saturday, June 6, 2020, as they protest the death of George Floyd. | Caroline Brehman/CQ-Roll Call, Inc/Getty Images

Protests grew and broadened on Saturday, expanding to incorporate new people and a wide array of activities that brought communities together.

The protests, which first began two weeks ago following the death of George Floyd, were mostly calm on Saturday as people marched on streets across the US, holding signs that read “Black Lives Matter” and “No justice, no peace.” It was a stark contrast to a week ago, when tension escalated as protesters clashed with the police.

You can see Reflecting Pool and Washington Monument in background: pic.twitter.com/TwgjAEPoLf

President Donald Trump commented on the protests by tweeting, “Much smaller crowd in D.C. than anticipated.” While the hundreds of thousands expected did not materialize, Saturday’s protests were, in fact, the largest the city had seen in the past two weeks.

Demonstrations in Philadelphia also attracted thousands of people. Protesters flocked to City Hall to demand defunding of the police and redirecting the money to city services, such as the library and public parks. People were out past the city’s curfew of 8 pm, but the protesters eventually peacefully dispersed before midnight on their own, according to the Philadelphia Inquirer.

As the crowds grew, the protests also became a place for the community to get together. In Philadelphia, a couple joined the protests on their wedding day to march in a suit and wedding dress. The people around them clapped and cheered as they held hands and kissed in the middle of the street.

In Atlanta, the protests also became a center for community building as demonstrators danced to Childish Gambino’s “This is America” — which has become an informal anthem for the protests. People also enjoyed live music played by a band perched on top of a parking garage, CNN reported.

“Music has completely changed the atmosphere, as you can see,” the band director told CNN. “As soon as we started playing, the crowd just immediately came this way. We just want justice. We understand what’s going on. Music will bring togetherness and everybody is here now.”

Protesters in Detroit also threw a dance party on Saturday as a way to help the community deal with the trauma caused by recent violence. MLive’s Dana Afana reported that people gathered downtown for dabke, a native Levantine folk dance, before heading back to the police headquarters for another round of protests.

“I saw during the crowd people trying to move their feet and move their bodies to kind of match with the marching. I’m just trying to let the people get out this energy that they have in a positive way and a way they can own,” Jah-T Headd, a Detroit resident who helped organize the dancing, told MLive. “As black people specifically, we deal with our trauma, we deal with our pain, often times through song and dance.”

Tens of thousands of people gathered in London, despite Covid-19 warnings from the health minister. Though a pandemic-related order banned more than six people from different households from gathering outside, the crowed marched together from Parliament Square to the US Embassy and even knelt on the ground for a minute in solidarity of the Black Lives Matter movement, according to the New York Times.

At least 20,000 people marched in Sydney to protest the police mistreatment of the black community as well as Indigenous Australians. The march almost didn’t happen: It was ruled unlawful under Covid-19 restrictions on Friday, but the decision was overturned by the court of appeals minutes before the event was supposed to begin.

The protests spread as far as Japan, where nearly 1,000 people marched in Tokyo and Osaka to speak out on police abuse, Japan Times reported. The demonstrations were fueled by the violent arrest of a Kurdish man by Tokyo police officers on May 22 — just three days before the death of George Floyd.

“We all know what’s happening in the US,” protester Nami Nanami told Japan Times. “The same thing is happening in Japan but nobody is talking about it.”

There have still been some escalations, despite protesters’ calls for accountability

City officials attempted to tone down their response to the protests by eliminating curfews and reducing arrests, with mixed success.

DC and Los Angeles lifted curfews earlier in the week, and protesters remained peaceful as demonstrations lasted late into the night. And officers didn’t enforce curfews in cities where they still existed, such as in New York City.

The number of arrests also drastically fell: Chicago, which once arrested more than 100 protesters in a single day, announced that the police made no arrests on Saturday. Cities like Atlanta, DC, Phoenix, and Miami made similar announcements.

Some officials also made the effort to keep their officers accountable. On Saturday, a Virginian police officer was charged with three counts of misdemeanor assault and battery for a violent arrest he made on Friday. Body camera footage reveals the officer using his stun gun on a black man who was walking away, then using it again when the man is already face-down on the ground.

Another officer from St. Louis was suspended for driving into a man on June 2 — and two other officers involved in the incident were also placed on leave. None have been arrested.

Despite these efforts, however, not all protests were free from conflict due to provocation from the police: In Seattle, the police used tear gas to disperse a peaceful crowd — even though the mayor had promised a 30-day ban on the use of the chemical weapon just a day before.

Dispersing the entire area and threatening arrest if people do not disperse pic.twitter.com/I5yX05O8dI

Provocations such as these are likely to help ensure the protests continue — particularly given they are part of what demonstrators hope to change. Whether high attendance can be sustained remains to be seen — but large protests are again expected across the world Sunday.