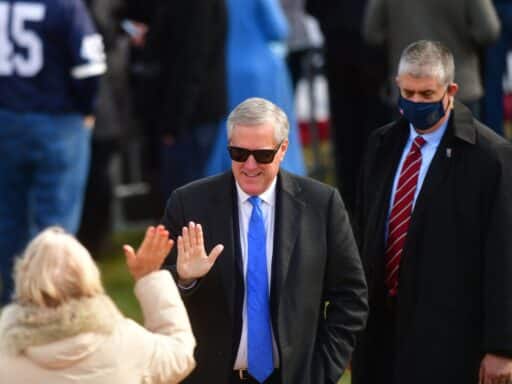 Meadows and Ben Carson were infected, plus an outbreak among the Secret Service.

The US Secret Service, which exists to protect the president and those closest to him, is being hit hard by the coronavirus — possibly from the White House itself.

President Donald Trump had been traveling extensively in the final run-up to the election, and everywhere he went, he had Secret Service agents with him. Now, more than 130 of those agents are in quarantine or isolation, either because they tested positive for the virus or were around people who did, the Washington Post reported Friday.

Trump held multiple rallies per day in the weeks prior to Election Day, and at least part of the new White House outbreak may have come from those rallies, according to people the Post spoke with who were familiar with Secret Service staffing. Roughly 10 percent of the Secret Service’s core security team is now off duty, the Post’s Carol D. Leonnig and Josh Dawsey reported.

On November 1 and 2, just before Election Day, Trump had 10 rallies in seven different states, requiring a different group of Secret Service officers to be stationed at each location. The rallies featured attendees packed tightly together, many of them without masks, and sometimes in cold, dry weather conditions that help fuel the virus’s spread.

But as Leonnig and Dawsey report, the outbreak could also be coming from within the White House itself rather than Trump’s travels.

White House staff largely eschew wearing masks, despite public health guidelines that they help contain the spread of the virus, and some Secret Service officers on duty at the complex have also been seen without them.

This is not the first coronavirus outbreak among the Secret Service. When Trump first resumed his campaign rallies in June, dozens of Secret Service agents came down with the virus. That outbreak happened after Trump’s ill-fated indoor rally in Tulsa, Oklahoma, and following trip Vice President Mike Pence took to campaign in Arizona.

And it’s not just the Secret Service experiencing an outbreak, either. After Trump himself and several of his top officials tested positive for Covid-19 in early October, it appears the entire White House is dealing with another coronavirus cluster.

White House Chief of Staff Mark Meadows was the first high-profile staffer to test positive in the Trump administration’s second outbreak. Bloomberg’s Jennifer Jacobs reported that Meadows tested positive on November 4, after attending an election night event at the White House alongside hundreds of people without masks.

That news would be worrying enough on its own. But as Jacobs reported, Meadows’ infection was not widely known until she broke the news — reportedly two days after he tested positive:

A small circle of people were aware earlier in the week that Meadows had become infected but were told to keep it quiet, several people said.

Others in Trump’s inner circle who have tested positive include Secretary of Housing and Urban Development Ben Carson and campaign adviser Corey Lewandowski. Carson was at the same large event on election night as Meadows, and he tested positive on Monday at Walter Reed National Military Medical Center in Bethesda, Maryland. He told the Post that afternoon that he was experiencing a “fever of 101 [degrees], chills, muscle cramps, respiratory issues, and fatigue.”

Lewandowski was at the election night event as well, which took place in the East Room of the White House. He told CNN that the party was likely not the source of his infection, however, saying he believes he caught it in Philadelphia. Trump’s political affairs director Brian Jack, adviser David Bossie, and Republican National Committee chief of staff Richard Walters have also tested positive for the coronavirus.

The outbreak has also caught up with a number of other staffers and aides. As Jacobs reported, that list includes Nick Trainer, a senior Trump campaign aide; Cassidy Hutchinson, one of Meadows’s closest aides; and Charlton Boyd, an aide to senior Trump adviser Jared Kushner.

The full extent of the latest White House outbreak might not be known for some time.

The US as a whole is dealing with its third — and worst — spike in Covid-19 cases. Nearly every day this week has seen a new single-day record for most cases, and hospitalizations and deaths are on the rise as well.

The White House, it seems, is doing little better.