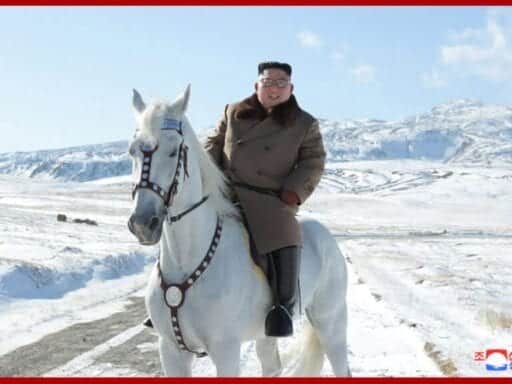 North Korea has released a series of photos of leader Kim Jong Un riding a majestic white horse atop a snowy mountain — and they’re as gloriously hilarious as you’d think.

One should typically be cautious when disseminating propaganda from a brutal authoritarian regime, and the equine images released by the state-run Korean Central News Agency (KCNA) on Tuesday and Wednesday certainly fit that bill.

But believe me when I say seeing Kim Jong Un try to kick off “Weird Dictator Winter” is really, really worth your time.

I mean, just look at these.

I have many, many thoughts, but here are just a few.

First, let’s just appreciate how incredibly goofy these pictures are. It’s Kim in a staged photo opportunity riding an immaculately white horse in the most winter wonderland-type scene imaginable. I know what my new computer wallpaper is going to be.

Second, horse-riding experts seem to be quite impressed with the dictator’s riding style. “Based solely on these photos, I really have nothing major to pick on [Kim] for from a riding standpoint,” Katie Bo Williams, a defense reporter at DefenseOne and an avid horse rider, tweeted on Tuesday after seeing the photos. “He’s not hauling on the animal’s mouth, his leg is basically underneath of [sic] him and the horse looks reasonably relaxed.”

Third, riding a horse and trying to look awesome while doing it is kind of Dictator 101. Turkmenistan’s dictator Gurbanguly Berdymukhamedov recently built a massive golden statue of himself riding a horse. And who could ever forget those iconic photos of Russian President Vladimir Putin riding a brown horse shirtless? I know I can’t.

Who rode it better? pic.twitter.com/Idcpmp9EYc

My fourth thought, though, isn’t as fun. As with all propaganda, especially that coming out of North Korea, these happy-go-lucky images have a more serious meaning — and many experts are worried about what they could be forecasting.

The mountain Kim and his horse climbed is Mount Paektu, which has great symbolic and sacred meaning in North Korea. It’s the mythical birthplace of the founder of the first Korean kingdom and it played a central role in both the Korean armed resistance to Japanese occupation in the early 1900s and later the Korean War, when guerrilla fighters led by Kim Il Sung — Kim Jong Un’s grandfather and the founder of modern North Korea — used the mountain as a base.

It’s so important to North Korea’s national history and identity that Kim Jong Il (Kim Jong Un’s father, who led the country until his death in 2011) literally rewrote history to claim he was born on the mountain (he wasn’t — records show he was actually born far away, in the Soviet Union).

Kim Jong Un and South Korean President Moon Jae-in even took a photo in front of the mountain when Moon made his historic visit to North Korea last year.

So for Kim to take an extensive photo shoot with a white horse on that mountain must mean he has something big to say. And based on the KCNA statement that came out with the pictures, it’s clear that he does.

The last two paragraphs are the ones to focus on, so let’s take each in turn.

In the second-to-last section, the statement mentions how Kim is looking out onto his country “that will achieve prosperity with its own efforts, meeting all headwinds with the storm of Mt Paektu.” It mirrors Kim’s repeated statements that North Korea will shift its focus from developing and testing weapons to improving the country’s economy.

However, that effort has been stymied by US-led sanctions that have stunted the country’s economic growth — a major reason why Pyongyang is upset it hasn’t made a nuclear deal with Washington that would lift the penalties.

So likely in an effort to look good in front of his domestic audience — dictators have politics, too — Kim took the Paektu glamour shots. “He may be trying to reclaim that narrative and symbolism, that prosperity will be on North Korean terms and not dependent on outside actors,” Jenny Town, a North Korea expert at the Stimson Center in Washington, told me. “It may be a hedging strategy, acknowledging that diplomacy may not lead to an agreement that would make gains.”

Which brings us to the final paragraph of the KCNA statement: “All the officials who accompanied him to the top of the mountain felt overflowing emotion and joy and convinced that there will be a great operation to strike the world with wonder again and advance the Korean revolution a step forward.”

Some experts are worried about “there will be a great operation to strike the world.” After all, Kim said that if North Korea and the US don’t make a deal by the end of the year that it may resume the testing of missiles that could hit America with a nuclear weapon. That could potentially kick off 2017-like worries of war between the two countries.

“The symbolism of the images themselves, and their throwback style to the propaganda of his grandfather’s era, seems to send a message of power, confidence, and readiness in the face of hard times to come,” Abraham Denmark, a former top Pentagon official for East Asia, told me.

Others, though, say the message is just a clear articulation of how Pyongyang is feeling about the lack of progress with the Trump administration. “I’m not more worried than I was a day or two ago,” Joshua Pollack, a North Korea expert at the Middlebury Institute for International Studies, told me. “They were ready to start down a new path as soon as it was clear that there was no there there in talks with the US.

“It’s not good, for sure, but things have been bad for a while now,” he added.

In effect, Kim has just announced — in the most North Korean style possible — America needs to make an agreement with us or we’ll go back to the worst of times. But to his citizens, the dictator promises they’ll survive economically despite the sanctions.

That’s bad news for anyone hoping the US and North Korea might find a peaceful way forward. It portends a very rocky, dangerous 2020.

At least we’ll have amusing photos to lift our spirits.

With impeachment, America’s epistemic crisis has arrived
Kobe Bryant’s merch helped remake his image. After his death, collectors are cashing in.
The debate over whether the very rich pay lower taxes than you, explained
The Warren/Buttigieg wine cave controversy, explained
New claims that Trump failed to protect American journalists in Egypt demand investigation
Washington has a top-two primary. Here’s how it works.