The shamelessness of Bill Barr 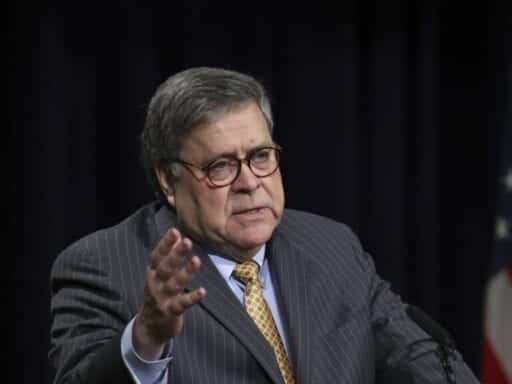 In a new interview, Barr said it’s bad when the government tries to affect “the outcome of the election.” Yes, seriously.

It’s often said that Donald Trump’s superpower is his lack of shame. It appears that Attorney General Bill Barr has been bitten by the same politically radioactive spider, at least if his Tuesday interview with NBC is any indication.

The interview with host Pete Williams focused on the Department of Justice’s inspector general report on the origins of the FBI’s Trump-Russia investigation. Barr said a number of questionable things in the interview, including contradicting one of Inspector General Michael Horowitz’s core findings: that there was legitimate reason to investigate links between the Trump campaign and Russia. He also tried to spin the Trump team’s contacts with Russia as something that “most campaigns” do.

But the most unbelievable line is when Barr attempted to cast the FBI’s surveillance of Trump campaign staff during 2016 as “the greatest danger to our free system” — because it, in his mind, constituted the government abusing its powers to influence an election. Yes, really:

From a civil liberties standpoint, the greatest danger to our free system is that the incumbent government use the apparatus of the state — principally the law enforcement and intelligence agencies — both to spy on political opponents but, also, to use them in a way that could effect the outcome of the election.

This is just not an accurate description of what happened in 2016. There is no credible evidence that the FBI investigation was an attempt to intervene in the election against Trump, a conspiracy theory that doesn’t even pass the most basic smell test. The existence of the Trump-Russia investigation wasn’t officially confirmed until March 2017 (and the most prominent leak during the campaign was pro-Trump, resulting in an iconically false New York Times headline: “Investigating Donald Trump, F.B.I. Sees No Clear Link to Russia.”) Why would the FBI keep its evidence against Trump secret until after the election if it was trying influence the outcome?

But setting aside the falsehoods, the sheer chutzpah of Barr’s comment is staggering. Again, according to Barr, “the greatest danger to our free system is that the incumbent government use the apparatus of the state…in a way that could effect the outcome of the election.”

In all seriousness, though, Barr’s move here is disturbingly Orwellian. He is correctly identifying the abuse of power to influence elections as a threat to American democracy, but then arguing that the people who investigated Trump are the ones who are actually of guilty of it. The criminal becomes the victim, the authoritarian the guarantor of our freedoms. You heard a similar refrain from Republicans during Monday’s House Judiciary impeachment hearing, when they repeatedly accused the Democrats of being the real threat to democracy here.

Barr’s embrace of this kind of truth-annihilating strategy is particularly interesting. He’s an establishment Republican with long credentials in the party, but one who has emerged as one of the most capable and willing defender of Trump and the ideology he stands for. His reasons for this, as my colleague Ezra Klein explains, is a deep sense of persecution: that conservatives and Christians are under siege from ruthless progressives, an existential battle that must be waged if America as we know it is to be preserved.

Under these circumstances, a lot becomes justifiable — even the kind of assaults on the idea of truth you more commonly see in various types of authoritarian regimes (North Korea’s formal name, for example, is the Democratic People’s Republic of Korea). It’s a way of emptying words of their content, of transmuting ideas like “democratic” to mean “in the interests of the ruling faction.”

In today’s Republican Party, this move has been a go-to at the highest levels — part of the acceptable toolbox for fighting back against what they see as a “progressive holy war” (as Barr put it in a recent speech). They’re enabled by a pliant media ecosystem, one that actively separates Republican partisans from sources of criticism and comfortably reassures their voters that up is in fact down. And they’ll continue to do it until, somehow, they’re made to suffer consequences for it.