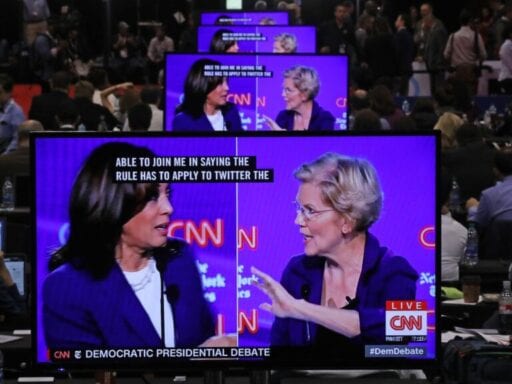 And it was all over the place.

Democrats running for president had their most vigorous debate yet about the power of tech companies, finally bringing the long-simmering conversation about Big Tech into the mainstream of Democratic politics.

The dozen Democratic candidates quarreled for almost 15 minutes at the fourth presidential debate about topics including digital privacy rights, the monopoly power of companies like Amazon, political fundraising in Silicon Valley, and whether politicians like Donald Trump should be banned from Twitter. It was the first time tech was discussed meaningfully on the Democratic debate stage — and a sign that the media sees the growing techlash as enough of a concern that candidates should be pressed on it on national television.

The combat mostly centered on Elizabeth Warren, the new presidential frontrunner who has made her proposal to break up tech companies like Facebook a cornerstone of her presidential run. Many of her competitors said they were not willing to go as far as her, although several decided to take their own whacks at Silicon Valley from other angles.

Beto O’Rourke offered the most direct criticism to Warren’s plan, even comparing her approach to Trump’s rhetoric about the press.

“We will be unafraid to break up big businesses if we have to do that — but I don’t think it is the role of a president or a candidate for the presidency to specifically call out which companies will be broken up,” O’Rourke said. “That’s something that Donald Trump has done in part because he sees enemies in the press and wants to diminish their power. It’s not something that we should do.”

Andrew Yang, the political neophyte running on tech-infused themes such as universal basic income, said Warren was correct in diagnosing the problem but that “using a 20th century antitrust framework will not work.”

Cory Booker would only say that his administration would “put people in place that enforce antitrust laws” but declined to sign on to the proposal to break up the tech giants. He did use some of the harshest language on the stage, saying that tech companies were responsible for a “massive crisis on our democracy.”

Tom Steyer, a San Francisco billionaire in his own right, indicated some openness to the idea that monopolies have to “be broken up or regulated” — but didn’t offer specifics about tech companies. The same went for Bernie Sanders, who also declined to address tech altogether, instead lamenting the consolidation of power across sectors from agriculture to media.

But the most fiery back and forth came when Kamala Harris, a senator who represents tech companies from California, tried to outflank Warren on how she would hold Big Tech accountable. She shifted from the antitrust question and instead tried to press Warren on why she would not call for Twitter to ban Trump from the platform.

Warren largely declined to engage on that terrain — which led to a messy exchange that showcased two candidates largely talking past one another.

“I don’t just want to push Donald Trump off Twitter. I want to push him out of the White House,” Warren said.

Warren didn’t clearly say one way or another what her stance on Trump’s Twitter account was — mostly ignoring Harris’s attempts to interject. (Warren at one point said that “all the rules should apply across the board.”) Warren instead tried to talk primarily about her new promise to not take money from tech executives, an implicit shot at candidates such as Harris, who has enjoyed substantial support from tech companies, which also employ several of her family members.

“You can’t go behind closed doors and take the money of these executives and then turn around and expect that these are the people who are actually finally going to enforce the laws,” Warren said. “If we’re going to talk seriously about breaking up Big Tech, then we should ask if people are taking money from the Big Tech executives.”

Democrats may have been attacking tech from wildly different angles, but it couldn’t be lost on anyone that during the 15 minutes of debate, not one of them said anything even remotely positive about an industry so closely assigned with the Democratic Party just a few years ago.

Thousands of Michiganders took to the streets to protest the governor’s stay-at-home order
The 2020 US House elections
House Republicans’ top-ranking woman is facing the toughest reelection of her career
Sexual misconduct allegations against R. Kelly spanning 25 years, in one timeline
The many obstacles to the “GOP state legislatures steal the election for Trump” scenario
WHO says a third of the newest coronavirus cases worldwide are in the US