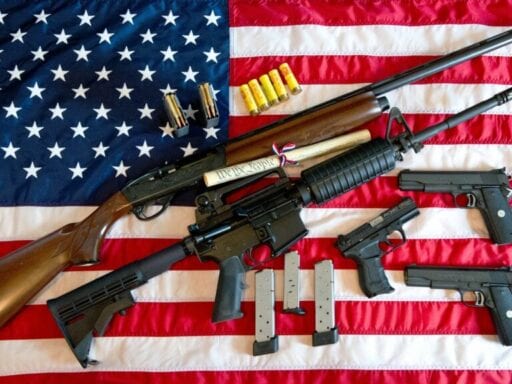 If you’re worried about police getting killed in the line of duty, look at America’s easy access to guns.

On Wednesday, a man shot seven police officers, killing one, as they attempted to serve a warrant to someone else at a home in Florence. The shooter could see the officers from “several hundred yards, so he had an advantage,” the local sheriff told reporters. The suspect surrendered after a negotiator talked him down, according to local officials.

It is rare for police officers to be shot or killed in a mass shooting, and on-duty police deaths have generally trended down for the past few decades.

But police officers in America may be uniquely susceptible to shootings, relative to other developed nations, due to the US’s abundance of guns.

The idea is simple: Police officers have to serve warrants and arrest people in every country in the world. That’s part of their job. But in America, they may be more likely to run into a person who is armed and could open fire — so these kinds of deadly incidents may happen more often.

Other data suggests that where there are more guns, there are more on-duty police deaths. A 2015 study, published in the American Journal of Public Health, concluded that every 10 percent increase in firearm ownership at the state level correlated with 10 additional officers killed in homicides over the 15-year study period.

This is reflective of America’s broader gun problem. Compared to other developed nations, America simply has many more gun deaths than its similar peers. That’s in large part because the country’s abundance of guns makes it so easy to carry out gun violence.

Researchers have linked America’s higher rate of gun deaths to its abundance of guns. This is true not just for on-duty police deaths, but also homicides, suicides, and domestic violence. For example, a 2013 study, also published in the American Journal of Public Health, found that, after controlling for multiple variables, each percentage point increase in gun ownership correlated with a roughly 0.9 percent rise in the firearm homicide rate.

Other factors play a role in gun violence. Poverty, alcohol consumption, and urbanization, for example, also contribute. But when researchers control for these other variables, they find that America’s number of guns play a big role in the number of gun deaths.

In fact, researchers have found that stricter gun policies can save lives. A 2016 review of 130 studies in 10 countries, published in Epidemiologic Reviews, found that new legal restrictions on owning and purchasing guns tended to be followed by a drop in gun violence — a strong indicator that restricting access to firearms can save lives. The review suggested that no one policy seems to have a big effect by itself, but a collection of gun restrictions can produce a significant effect over time.

But America has fairly weak gun laws, compared to other developed nations. That’s enabled a huge supply of guns in the US.

The abundance of guns in America is something that police in the US have to constantly be on the watch for. In day-to-day work that is often inherently confrontational, it’s a lot easier in the US for those confrontations to turn deadly.

Kennedy of John Jay College called it “a very, very powerful dynamic” in America. For his policing research, Kennedy has traveled all around the developed world, from the US to Canada to Europe to Japan. “In none of these other settings do police officers feel this way or do the police have these sorts of conversations and concerns,” he said.

That’s not to say that people in other countries are always unarmed. In some places, like Glasgow, Scotland, there have been big problems historically with knife crime. But the reality is weapons other than firearms are simply much less likely to carry a deadly threat.

More guns may also lead to more shootings by police

It goes the other way too: The abundance of guns is important not just due to the threat it poses to police, but because it also may make police more guarded and even aggressive, increasing their chances of using — sometimes wrongly — deadly force.

“It’s an obvious, common-sense observation,” Tracey Meares, a policing expert at Yale Law School, previously told me. “In situations where police officers say, ‘I was in fear for my life,’ and later substantiate that with, ‘I thought the person had a gun,’ the reasonableness of someone’s assumption that somebody could possibly have a gun is naturally related to the prevalence of guns in the environment.”

To verify this, earlier this year John Roman, a senior fellow at NORC at the University of Chicago, and I combed through police killing data and gun ownership data to see if there was a connection. Our results were suggestive: They indicated that weaker gun laws and higher rates of gun ownership do, at the very least, correlate with more killings by police officers (including shootings and other incidents of lethal force).

For the analysis, Roman went through the police killing data from the Police Violence Report, verifying it with other reports and the Washington Post’s database, to get an idea of how many police killings there were in 2017. We then compared police killing rates for each state with the state’s population (based on Census data), a composite score for state’s gun control laws (based on a National Rifle Association database), and gun ownership rates (based on a 2013 national survey).

This is a crude analysis, not a peer-reviewed study. So caveats apply: Correlation is not causation.

The NRA score doesn’t differentiate between the strength of different gun control laws, instead assigning one point to each of the laws included in the database. Also, the survey used for state-level gun ownership may not have picked up a large enough sample size for some low-population states, such as Hawaii. And the analysis didn’t deploy any rigorous controls to rule out other possible factors.

But the findings are echoed by a 2017 study, published in the American Journal of Public Health, that found that stronger gun laws are associated with fewer fatal police shootings. “When we controlled for sociodemographic factors, states in the top quartile of legislative strength had a 51% lower incidence rate than did states in the lowest quartile. Laws aimed at strengthening background checks, promoting safe storage, and reducing gun trafficking were associated with fewer fatal police shootings,” the researchers concluded in the study.

“One of the most reasonable take-homes is that … when police are less often in situations in which they might reasonably fear that a gun is going to be pulled, they’re less likely to react with the use of lethal force,” Aaron Kivisto, the study’s lead author, previously told me.

As with the link between guns and gun deaths more broadly, gun ownership rates and gun control laws are not the only contributors to killings by police officers. Other research, for example, has linked police shootings to structural racism, which speaks to the vast racial disparities seen in police use of force. Policies at the department level — which can often encourage escalation instead of deescalation — play an important role as well. And laws that give police wide latitude to use force may be part of the issue too.

But experts and the limited research so far suggest that the abundance of guns and gun laws in America likely play a role.

So less access to guns could benefit everyone — potentially leading not just to fewer on-duty police deaths, but also fewer incidents in which police use deadly force and less gun violence in general.

Missouri could become the first state with zero abortion clinics. How did we get here?
Vox Sentences: Another blow for Boeing
Days before the election, the Senate will take time to grill Big Tech CEOs — again
The Democrat trying to unseat scandal-plagued Rep. Jim Jordan in his heavily Republican district
A British couple was poisoned with a lethal toxin. The UK is blaming Russia.
Biden calls for Trump’s Supreme Court nominee to be withdrawn if he wins the election