The stunning new texts, documents, and impeachment evidence released by the House, explained 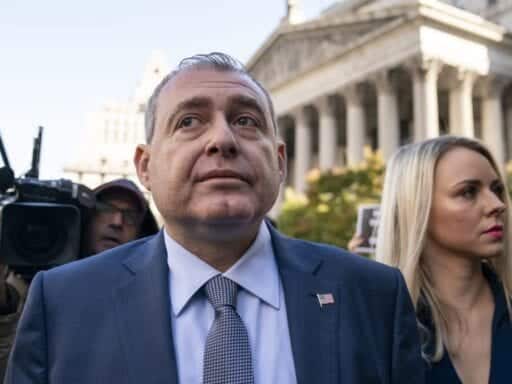 And boy, are they ugly.

The documents, which include Parnas’s handwritten notes, copies of text messages, and other correspondence, reveal some new information — including that Giuliani claimed to be acting with President Trump’s “knowledge and consent” in his communications with the Ukrainian government.

One handwritten note of Parnas’s, scribbled on Ritz-Carlton hotel stationery, clearly states his main objective in his dealings with Ukraine: to get Ukraine’s president to announce “the Biden case will be investigated.”

The documents also provide the strongest evidence yet that there was a corrupt understanding involving prosecutor general Yuriy Lutsenko (a Ukrainian official in the previous regime). Lutsenko offered to investigate Burisma and the Bidens — and, in exchange, he insisted that US Ambassador to Ukraine Marie Yovanovitch, whom he had clashed with, be fired. He made this quid pro quo clear in his messages to Parnas.

Particularly is a set of messages Parnas received from a person named Robert F. Hyde, a Republican congressional candidate. Hyde texted Parnas that he had people tracking Yovanovitch’s movements closely in Ukraine. He claimed he could tell whether her phone and computer were off. And he wrote: “If you want her out they need to make contact with security forces.” (It is not yet clear whether these claims by Hyde were true. On Wednesday morning, Parnas’s lawyer denied they were, and said Hyde had a “dubious mental state.”)

There’s relatively little about Trump specifically here — Parnas was a degree removed from the president — but the overall takeaway is that the effort to get dirt on Biden stunk to high heaven of corruption.

Who is Lev Parnas again?

Lev Parnas is a Soviet-born US citizen now living in Florida who donated large sums of money to Republicans in recent years and became a close associate of Giuliani. Parnas and his colleague Igor Fruman ended up serving as Giuliani’s “fixers” in his search for dirt that would help Trump politically in Ukraine. They talked to Ukrainian officials and tried to help Giuliani get documents and meetings.

In October, though, Parnas and Fruman were indicted by the US Attorney’s Office for the Southern District of New York on charges of campaign finance law violations, regarding those hundreds of thousands of dollars they donated to Republicans in 2018. Since then, Fruman has been quiet — but Parnas went public, claiming through his lawyer that he had important information about the impeachment inquiry that Democrats would want.

The judge in Parnas’s case gave him permission to turn over some of the evidence prosecutors had obtained to House impeachment investigators. He has done so — and this is our first look at some of what he provided.

Giuliani told the Ukrainians he was acting on Trump’s behalf

First off, the documents make clear that Giuliani told the Ukrainians he was acting at Trump’s behest. He wrote a letter to Zelensky dated May 10, 2019, while Zelensky was still president-elect and shortly before he was inaugurated, asking for a meeting.

“In my capacity as personal counsel to President Trump and with his knowledge and consent, I request a meeting with you,” Giuliani wrote.

Giuliani did not explain what the meeting was about — but the letter’s date is one day after Giuliani told the New York Times he would soon be traveling to Kyiv to try to get the Ukrainian government to investigate the Bidens and supposed Ukraine interference in the 2016 election.

Giuliani also wrote in the letter that he would be accompanied on the trip by Victoria Toensing, a conservative lawyer involved in the dirt-digging effort (whom Giuliani described as “very familiar with this matter”).

The documents also reveal that when Parnas and Fruman came under scrutiny in the impeachment inquiry (but before his arrest), Trump personally approved his former lawyer John Dowd’s representation of the pair. That’s according to an email from Trump’s lawyer Jay Sekulow.

Sekulow will be among Trump’s defense team in his Senate trial.

An intriguing note from Parnas

Another interesting tidbit is a note — which the House Intelligence Committee says Parnas has confirmed he wrote — laying out an apparent to-do list. It includes:

The note reads: “get Zalensky to Annonce that the Biden case will be Investigated.” That is, get Ukraine’s new president to announce an investigation of the Bidens.

This is significant because several Trump administration officials, such as Ambassador to the EU Gordon Sondland, have long claimed they only discussed the possibility of investigating Burisma, the natural gas company whose board Hunter Biden sat on.

But here is Parnas openly referring wanting Ukraine to investigate “the Biden case,” just as Trump said he wanted on his infamous July 25 phone call with Zelensky. The circumstances in which the note was written — notably, the date and who Parnas may have been talking to while he scribbled the note — are unclear.

Another batch of the evidence pertains to communications Parnas had with Yuriy Lutsenko, who served as Ukraine’s prosecutor general under Zelensky’s predecessor.

To recap: A prologue, of sorts, to the impeachment saga occurred in March 2019 when Giuliani, Parnas, and various corrupt Ukrainians launched a smear campaign against the US ambassador in Kyiv, Marie Yovanovitch.

These (translated) messages suggest that Lutsenko was demanding Yovanovitch’s firing — and that he communicated to Parnas that, in return, he would make allegations about “B.”

Above, Lutsenko tells Parnas that “if you don’t make a decision about Madam— you are bringing into question all my allegations. Including about B.” (“Madam” clearly means Yovanovitch, and “B” is shorthand for either Burisma or Biden, as later messages make clear.)

Lutsenko soon writes about “testimony about transfers to B,” and then about “copies of payments from Burisma to Seneca.” (Rosemont Seneca Partners is the consulting firm Hunter Biden co-founded.) He also complains how Parnas can’t get rid of someone female, to which Parnas responds, “She’s not getting away.”

Finally, and most disturbingly, is a set of messages Parnas exchanged with a person named Robert F. Hyde, a controversial Republican congressional candidate in Connecticut who has spent time at Mar-a-Lago and Trump’s DC hotel.

About 13 hours later, Hyde reported back to Parnas: “She under heavy protection outside Kiev.” Then, two days later he said he had “guys” there who could “do” something — and that he now knew Yovanovitch’s whereabouts, and that her phone and computer were off.

Hyde went on: “They are willing to help if we/you would like a price.” He added: “Guess you can do anything in the Ukraine with money… what I was told.”

The next day, Hyde reported back that Yovanovitch would not be moved, and that his contacts were asking “what is the next step.”

He added, ominously: “If you want her out they need to make contact with security forces.”

A few days after that, Hyde reported he had “a person inside,” and asked if Parnas still needed “intel” or if they should “stand down.”

In these messages, there is no response from Parnas after that, for nearly two months.

These messages certainly seem to suggest that Hyde was having Yovanovitch surveilled — and that one ominous message asking “if you want her out” may imply something much darker.

But it is unclear whether Hyde — about whom little is known, other than that he owned a landscaping company in Connecticut — truly had these capabilities, or whether it was some sort of bizarre attempt at braggadocio.

ABC’s Katherine Faulders reached Hyde for comment, and he said he was “absolutely not” threatening to harm Yovanovitch. And Parnas’s lawyer said in a statement Wednesday morning: “We completely categorically deny that Lev was involved in any activities with Hyde to surveil the ambassador and try to harm the ambassador. We believe Mr Hyde’s activities to be a reflection on his dubious mental state.”

In any case, it certainly seems to be something law enforcement should take a look at.

A court ruling opens the door for Trump to separate some migrant families again
The astonishing effects of the shutdown, in 8 charts
How Chris Pratt became the internet’s least favorite Chris
The John Travolta Gotti movie is waging a Trump-style war on critics
The brief hype about a John Kerry presidential run, briefly explained
Amazon is selling its futuristic cashierless technology to other stores