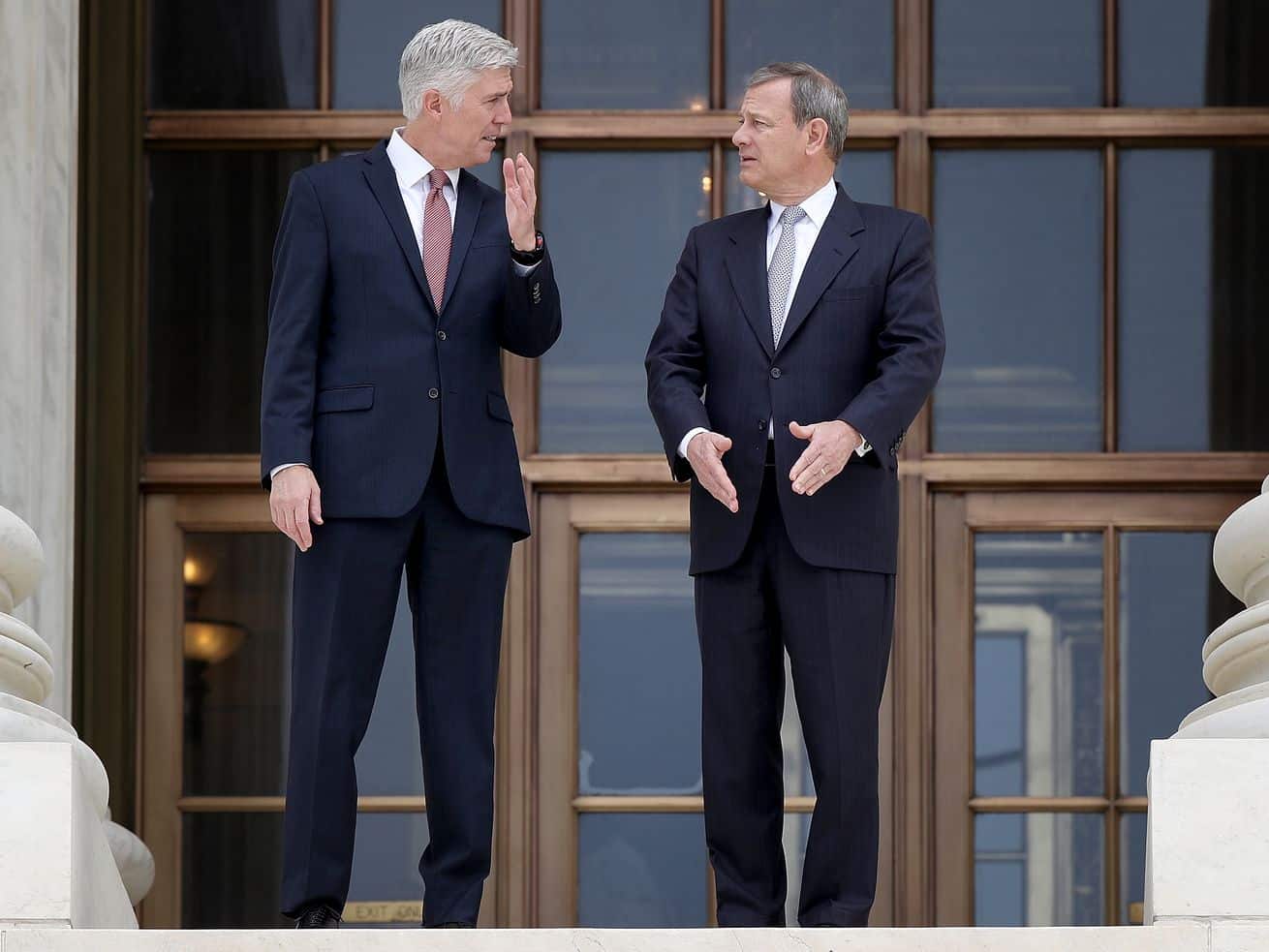 Voting rights mean little if the Court refuses to enforce them.

Many provisions of this new Florida law mirror similar provisions in a Georgia voter suppression bill that became law last March. The Georgia law also takes aim at absentee voting, among other things, but its most troubling provision allows the state’s Republican-controlled legislature to effectively take over county election boards — boards that have the power to disqualify voters and to close polling places.

Meanwhile, Republicans in Texas are pushing legislation that would redistribute polling precincts in urban areas in ways that would make it harder for many voters to cast a ballot, and that would require local election officials to potentially purge thousands of voters from their rolls. In Arizona, Republicans have proposed an array of new hurdles that voters would have to clear to cast a ballot — all while conducting a haphazard “audit” of the 2020 election that appears designed to justify such laws.

All of this is possible because the Supreme Court has spent the past decade and a half dismantling safeguards against these kinds of laws. Not that long ago, these attacks on democracy would have run headlong into a skeptical judiciary. Now they are likely to be upheld.

A little over a decade ago, federal statutes and well-established constitutional doctrines provided a robust shield against state laws that serve little purpose other than to restrict the right to vote. But the Supreme Court started poking holes in this shield not long after President George W. Bush appointed Chief Justice John Roberts, a longtime crusader against strong voting rights laws, and Justice Samuel Alito, the Court’s most reliable Republican partisan.

And the Court only grew more hostile to voting rights after President Donald Trump added three conservative Republicans to its bench.

States like Florida and Georgia are making in harder to vote, in other words, because they think the courts will let them get away with it. Due to some crucial decisions by the Roberts Court, they’re probably right.

Not that long ago, the Supreme Court would have struck down laws that target trumped-up allegations of voter fraud

Though the right to vote is the essential building block of any democracy, not all laws that make it more difficult to vote are unconstitutional. As the Supreme Court recognized in Storer v. Brown (1974), “as a practical matter, there must be a substantial regulation of elections if they are to be fair and honest and if some sort of order, rather than chaos, is to accompany the democratic processes.”

Yet while many election rules are permissible even if they prevent some small cohort of voters from casting a ballot, the Supreme Court as recently as 13 years ago forbade states from enacting laws that serve no purpose other than to restrict the franchise. As the Court held in Anderson v. Celebrezze (1983), when confronted with a law that makes it harder to vote, federal courts must weigh “the character and magnitude of the asserted injury” to the right to vote against “the precise interests put forward by the State as justifications for the burden imposed by its rule.”

Laws that imposed minimal burdens on the right to vote, while serving legitimate state interests, were typically upheld. But laws that burdened the right to vote without achieving any other real purpose would be struck down under the Anderson framework.

Crawford was an early challenge to what was, at the time, a cutting-edge method of restricting the franchise: strict voter ID laws. Proponents of such laws, which require voters to show a photo ID before they can cast a ballot, typically claim that they are necessary to prevent anyone from impersonating a voter at the polls. But this kind of voter fraud is so rare that it barely exists.

A study by Loyola Law School professor Justin Levitt, who led much of the Justice Department’s voting rights work in the Obama administration, uncovered only 35 credible allegations of in-person voter fraud among the 834 million ballots cast in the 2000-2014 elections. A Wisconsin study found seven cases of any kind of fraud among the 3 million votes cast in the 2004 election — and none were the kind that could be prevented by voter ID. In 2014, Iowa Secretary of State Matt Schultz, a Republican, announced the results of a two-year investigation into election misconduct within his state. He found zero cases of voter impersonation at the polls.

The primary opinion in Crawford was only able to identify one case of in-person voter fraud at the polls in the preceding 140 years.

So, under Anderson’s framework, the Indiana voter ID law at issue in Crawford should have been struck down. A state’s power to regulate elections is at its nadir when it targets an imaginary or virtually nonexistent problem.

Yet the Court allowed Indiana’s voter ID law to go into effect in Crawford.

The Court’s conservatives were unanimous in favor of this result, but it’s worth noting that the vote in Crawford was 6-3 with the five conservative justices splitting between two separate opinions. The primary opinion in Crawford was authored by Justice John Paul Stevens, a moderate Gerald Ford appointee who frequently voted with the Court’s liberal bloc.

Stevens later described Crawford as “a fairly unfortunate decision.” And, shortly after Stevens’s death in 2019, election law scholar Rick Hasen speculated that Stevens’s opinion in Crawford may have been a “tactical move that saved the country from a much worse decision” — Stevens’s opinion was joined by Chief Justice Roberts and Justice Anthony Kennedy, who might have joined a more radical opinion by Justice Antonin Scalia if Stevens hadn’t voted for a conservative outcome.

Regardless of why the justices voted the way they did in Crawford, however, the decision was still a disaster for voting rights. It established that states may enact laws restricting the franchise, even if the only justification for the law is an imaginary or greatly exaggerated problem.

Beyond the balancing test recognized by cases like Anderson, federal law is also supposed to provide very robust safeguards against racial discrimination in elections.

The most potent provision of the federal Voting Rights Act was Section 5 of the law, which required that states and local governments with a history of racist voting practices “preclear” any new voting rules — either with the Justice Department or with a federal court in Washington, DC — before those new rules could take effect. The idea was to stop racist election rules from ever having a chance to disenfranchise anyone.

Section 5, moreover, provided very broad protection against racial voter discrimination in the jurisdictions where it applied. Under Section 5, covered states and local governments were required to seek preclearance for any new “voting qualification or prerequisite to voting, or standard, practice, or procedure with respect to voting.” And preclearance would be denied if the new election rule had either the “purpose” or the “effect of denying or abridging the right to vote on account of race or color.”

Before the Supreme Court effectively eliminated this preclearance regime in Shelby County v. Holder (2013), nine states were subject to preclearance on a statewide basis. That included Arizona, Georgia, and Texas.

Before Shelby County, in other words, Texas would not have been allowed to implement a law that shuts down voting precincts in primarily Black and brown neighborhoods. Similarly, Georgia’s entire voter suppression law would be subject to preclearance, as would any new action taken under that law — such as a decision by state-level Republicans to take over local election boards in Atlanta, or to use their control of local election administration to shut down polling locations in Black communities.

The premise of Shelby County was that it was unfair to single out the particular jurisdictions that were previously subject to preclearance because those jurisdictions no longer engaged in the kind of “‘pervasive,’ ‘flagrant,’ ‘widespread,’ and ‘rampant’ discrimination” that characterized the Jim Crow era. As Roberts wrote for the Court in Shelby County, “there is no denying … that the conditions that originally justified [preclearance] no longer characterize voting in the covered jurisdictions.”

Perhaps. But, as Justice Ruth Bader Ginsburg famously wrote in dissent, the fully operational Voting Rights Act was one of the primary reasons Jim Crow voter suppression waned in the latter part of the 20th century. “Throwing out preclearance when it has worked and is continuing to work to stop discriminatory changes,” Ginsburg clapped back at Roberts, “is like throwing away your umbrella in a rainstorm because you are not getting wet.”

Ginsburg’s warning now seems prescient, as many of the same states that were once subject to preclearance are now racing to enact laws disenfranchising voters.

It’s going to get worse

Decisions like Crawford and Shelby County were handed down when the relatively moderate conservative Justice Kennedy held the balance of power on the Supreme Court, when Justice Ginsburg was still alive, and when Amy Coney Barrett was still an obscure law professor at Notre Dame. Now that Kennedy and Ginsburg are no longer around, the Court’s new majority is likely to make significant new incursions on the right to vote.

The Supreme Court heard a case in March, for example, that could potentially dismantle what remains of the Voting Rights Act. Although several of the justices seemed disinclined at oral argument to eliminate all of the nation’s safeguards against racist election laws in one fell swoop, this case is still likely to weaken the Voting Rights Act even further, opening the door to more voter suppression laws.

The conservative justices, meanwhile, are pushing a radical doctrine that would give state legislatures an unprecedented new power to enact new election laws — even if those laws are vetoed by the governor or struck down by the state’s courts. As Justice Neil Gorsuch described this doctrine, “the Constitution provides that state legislatures — not federal judges, not state judges, not state governors, not other state officials — bear primary responsibility for setting election rules.”

It’s unclear whether the Court will implement this doctrine or how far it will go in doing so. Of the six conservative justices, only four currently endorse Gorsuch’s approach. Roberts has backed it in the past, but he stepped away from that view in an opinion last October. This means that the decision likely comes down to the recently confirmed Justice Barrett, who has not been on the Court long enough to reveal whether she agrees with Gorsuch.

If taken to its logical extreme, Gorsuch’s proposed rule could skew elections even further toward the Republican Party. It could potentially allow gerrymandered state legislatures in states like Wisconsin, Michigan, and Pennsylvania to draw congressional maps that will lock Democrats out of power — and then to enact these maps into law even if the states’ Democratic governors attempt to veto the maps. Gorsuch’s approach might also prohibit state supreme courts from enforcing state constitutional provisions that protect voting rights or prohibit gerrymandering.

The Supreme Court, in other words, is signaling that it is not inclined to protect voting rights — and that it may even be inclined to further dismantle existing rules that protect our democracy. Republican state lawmakers are as capable of reading these signals as anyone else. And so it should come as no surprise that we are seeing the kinds of voter suppression bills that we are now seeing in places like Georgia, Florida, Texas, and Arizona.