The Supreme Court term starts Monday — with or without Brett Kavanaugh 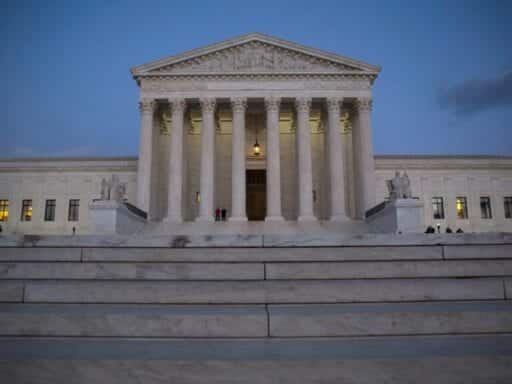 But the Court is perfectly capable of functioning with eight justices.

On Monday, October 1, the Supreme Court will start its 2018-’19 term. Since nominee Brett Kavanaugh hasn’t even had a confirmation vote in the Senate Judiciary Committee yet — much less on the full Senate floor — there might be only eight justices on the Court when the term begins.

If Thursday’s hearing with Kavanaugh and Christine Blasey Ford (who accuses Kavanaugh of attempting to rape her when he was 17 and she was 15) goes well for Kavanaugh, and the Senate Judiciary Committee follows through with its scheduled vote Friday, Senate Majority Leader Mitch McConnell might want to push the Senate vote through as quickly as possible so that Kavanaugh can be on the bench when the term begins.

If the hearing goes badly for Kavanaugh, it might take longer to overcome Republican misgivings about President Donald Trump’s nominee — and Senate Republicans might even decide that it’s better to replace Kavanaugh with another conservative judge who can be confirmed before the new Senate term starts in January.

From the Court’s perspective, they probably don’t need to rush.

The Supreme Court is perfectly able to function with only eight justices — they did so for over a year after Justice Antonin Scalia died in February 2016. (Republicans refused to confirm a replacement nominated by Barack Obama, and the seat was ultimately filled in April 2017 by Trump nominee Neil Gorsuch).

The only potential hiccup is a 4-4 case that makes it impossible to issue a nationwide ruling on a subject — but the Court has enough control over when it takes cases, and when it rules on them, that it could easily go through the first few months of the term without having to issue a 4-4 ruling on a case it would rather have a 5-4 ruling on.

Traditionally, if you weren’t on the bench for the oral argument, you don’t cast a vote

The Supreme Court doesn’t have to release any decisions before Kavanaugh (or whoever) gets seated on the Court.

Because it’s a new term, there isn’t a backlog of pending cases that have been argued and haven’t been decided yet. (This is the crucial difference between a justice leaving the court in the middle of the term and the end: There were cases in which Scalia, for example, had participated in the oral argument and would have voted a particular way, but after he died the Court couldn’t count his vote in any cases that hadn’t yet been released.)

The justices will start hearing oral arguments in new cases on Monday, and the schedule is packed: The Court’s hearing six cases next week, five cases the week after, six cases the last week of October, and six cases the first week of November.

But that’s it. The rest of the Court’s schedule isn’t set — there are a lot of cases that the Court has agreed to hear at some point, but hasn’t set a date for. And if it looks likely that there won’t be a nine-justice court until after the first week of November, the justices will probably keep declining to schedule the cases that they know they’ll want nine votes on. (This is what the Court did after Scalia’s death, too.)

The reason they might delay: Traditionally, justices don’t vote in cases unless they were present at oral argument. (Justice Gorsuch, for example, recused himself from all cases that had been heard before he was confirmed in April 2017.)

But that rule appears to be an unwritten one, and it’s been breached before, albeit in different circumstances — when Chief Justice William Rehnquist had a tracheotomy in 2004, he participated in cases by working off the transcripts and notes of oral arguments he missed. If future Justice Kavanaugh (or whoever) really wanted to cast a vote in a case heard in October, and the other justices really wanted his input, it would probably work out.

None of the cases that have been scheduled involves an issue that Justice Kavanaugh (or whoever) would necessarily be burning to weigh in on.

Remember that most Supreme Court cases don’t break down along partisan lines. Under Chief Justice John Roberts, in particular, there are a lot of unanimous decisions. And there’s no difference between an 8-0 vote and a 9-0 vote.

There is one capital punishment case on the docket, being heard Tuesday, but it’s a narrow one determining whether the Eighth Amendment prohibits executing someone who no longer remembers the crime they committed after suffering several strokes.

If Kavanaugh isn’t confirmed before Monday, he’ll miss riveting cases on the scope of the Age Discrimination in Employment Act as it applies to employers part of political divisions of states, and on whether determinations of economic impact in designating critical habitat are subject to judicial review.

There are a few early cases that are likely to be legally tricky — such as a case set to be heard Tuesday on lawsuits in federal court from people whose property has been taken by the government — and that might even result in 4-4 splits.

But even a 4-4 split isn’t the end of the world; it just means that the lower court’s ruling stays in effect. That can be frustrating when there are conflicting rulings from different lower courts, but it’s generally survivable — and there’s nothing stopping the Court from taking a similar case up once there are nine justices to resolve the same question.

Court-watcher Adam Feldman of the blog Empirical SCOTUS theorized to Fox News that the justices might have set up their fall schedule knowing that Justice Anthony Kennedy would retire and his successor might not be appointed yet when the next term began. In that one regard, at least, this confirmation process is fairly normal.

Francis Fukuyama recommends 2 books on tribalism in politics
How the pandemic could change traditional Thanksgiving
Coronavirus isn’t transphobic. But America’s economic and health systems are.
Lovecraft Country’s first trailer teems with monsters, genre subversion, and social allegory
Kavanaugh and the problem of “himpathy”
Vox Sentences: Meddling in the midterms