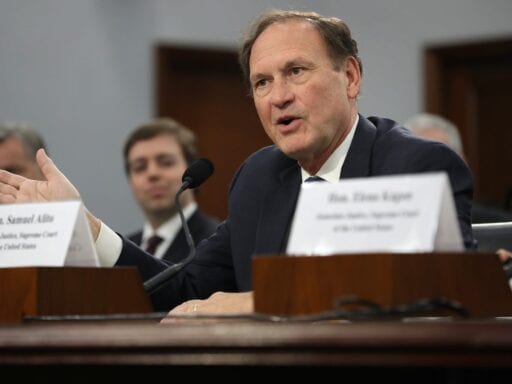 The upshot of this Supreme Court order: Pennsylvania voters, if you haven’t voted yet, do not vote by mail — vote some other way.

The Supreme Court handed down an odd order Wednesday that, at least at first glance, appears to be a victory for voting rights. The Court ruled that it will not decide — yet — whether to reverse a Pennsylvania Supreme Court decision ensuring that many ballots mailed before Election Day, but arriving after the election, will be counted.

Dig down just a little bit, however, and the order isn’t the win for voting rights that it seems to be. An opinion by Justice Samuel Alito, which is also joined by two other justices, suggests that the Court may still order an unknown number of ballots tossed out after next week’s election is over. In other words, the Court may have just rejected the Pennsylvania GOP’s latest attempt to throw out mail-in ballots that arrive up to three days after Election Day — but Alito’s opinion reserves the right to revisit the case after the votes are counted and the election is close.

What this all means for Pennsylvania voters: Do not vote by mail if you still haven’t voted. Vote in person, or physically take your ballot to an elections office or polling station.

Let’s back up a bit and explain how we got here. In mid-September, the Pennsylvania Supreme Court handed down a decision allowing many ballots that arrive up to three days after Election Day to be counted. The Pennsylvania Republican Party asked the US Supreme Court to reverse the state supreme court — a highly unusual request because state supreme courts are supposed to have the final word on how to interpret a state’s own law.

Wednesday’s order in Republican Party of Pennsylvania v. Boockvar denies this relief to the GOP — but only for the time being. Though the Court did not explain its order, Alito wrote a brief opinion for himself and Justices Clarence Thomas and Neil Gorsuch, which warns that the Republican Party’s request to toss out these ballots remains live — and that the Supreme Court might still grant this request once the election is over.

“I reluctantly conclude that there is simply not enough time at this late date to decide the question before the election,” Alito writes in his opinion. Nevertheless, he adds that the case “remains before us” and could be decided “under a shortened schedule” after the election takes place.

The upshot of Alito’s opinion is this: Pennsylvania will conduct its election. Ballots that arrive before Election Day will most likely be counted. But ballots that arrive during the three-day window after the election may still be tossed out.

The state supreme court decision holding that these ballots will be counted remains in effect, for now. But the US Supreme Court could reverse that decision, requiring those ballots to be tossed out after the election has already happened. For the time being, the state plans to segregate ballots that arrive during the three-day window so that they know which ballots to toss out if the Court orders them to do so.

As a practical matter, that means that the state supreme court’s decision is likely to be the final word in this case if the election is not close. But if the race for Pennsylvania’s presidential electors — or perhaps a congressional election — is close enough that the result could change if the late-arriving ballots are tossed out, then the US Supreme Court could very well void those ballots.

One other thing is worth noting. Wednesday’s order is the second time Republican Party has come before the Court. Just last week, before Justice Amy Coney Barrett’s confirmation to the Supreme Court, Thomas, Alito, Gorsuch, and Justice Brett Kavanaugh all voted to toss out these contested ballots. Because the Court was deadlocked at 4-4, the Pennsylvania Supreme Court ruling stood.

The GOP asked the justices to look at the case a second time, probably because the Republican Party believed that Barrett would give them the fifth vote they needed to prevail.

But Barrett did not participate in the case the second time around either. According to a statement from the Court’s Public Information Office, “Justice Barrett did not participate in the consideration of this motion because of the need for a prompt resolution of it and because she has not had time to fully review the parties’ filings.” But Barrett does not appear to have recused from the case entirely, and she could still weigh in if the case comes before the justices again.

The third time could very well be the charm for the GOP. If the Court considers this case for a third time after the election, Barrett will most likely have enough time to review the case and to decide how she wants to vote — perhaps giving Alito, Gorsuch, Thomas, and Kavanaugh the fifth vote to strike down the Pennsylvania state supreme court.

That said, one potentially confounding factor is Justice Kavanaugh. Though Kavanaugh voted the first time Republican Party was before the Court to grant the GOP’s request, he did not join Alito’s opinion. So it is possible that Kavanaugh would not order the ballots tossed out after the election has already happened.

Nevertheless, the fact remains that ballots that arrive up to three days after the election could still be tossed out. No Pennsylvania voter who hasn’t already voted should feel comfortable mailing their ballot at this late date.

So let me end this piece with a warning for Pennsylvania voters — and for voters anywhere who want to be sure that their ballot is counted. If you have not already cast your ballot, do not send it by mail. Either go to an in-person polling place and cast your vote there, or fill out your absentee ballot and physically deliver it to an elections office or polling station. (You can check the mail-in ballot rules for your state here.)

The upshot of Wednesday’s order in Republican Party is that voters who mail their ballots this close to Election Day risk having those ballots tossed out by the Supreme Court.

Gina Rodriguez apologizes, amid backlash, for saying the n-word on Instagram
A young woman disappeared in Iowa. Here’s why President Trump got involved.
The Trump-Ukraine whistleblower complaint, explained
House managers: Trump poses an “immediate threat to the nation and the rule of law”
Systemic racism, explained (to kids)
Trump used his latest coronavirus briefing to push a bizarre lie about the deficit