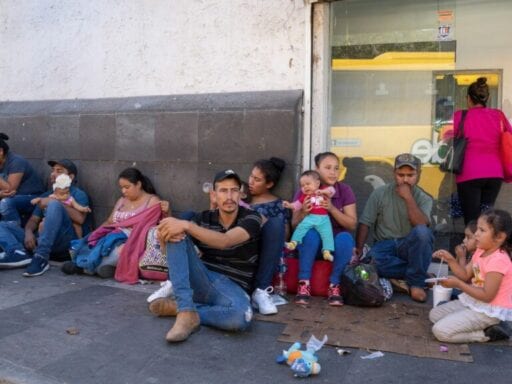 Share
Loading...
Migrants, mostly from Mexico, are pictured sitting on the ground waiting near the Paso del Norte Bridge at the Mexico-US border, in Ciudad Juarez, Mexico, on September 12, 2019.  | Paul Ratje/AFP/Getty Images

The new agreement would require migrants passing through Honduras to stay there.

The Trump administration signed an agreement Wednesday that could require immigrants coming to America through Honduras to seek asylum there, regardless of whether they’re seeking help from the United States under international torture agreements or the asylum system.

The administration signed a similar agreement with El Salvador on Friday and another with Guatemala in July. Neither has gone into effect yet. Together, the three countries are the source of most migrants crossing the southern border.

The terms of Wednesday’s agreement, which are not yet public, allow the US to send migrants back to Honduras, in addition to El Salvador and Guatemala, if they did not seek asylum or other protections in those countries first, according to a senior Department of Homeland Security official. It remains unclear why Honduran officials agreed to the deal, which was signed as Honduran President Juan Orlando Hernández faces prosecution in the US for allegedly accepting campaign contributions from drug traffickers.

All three countries struggle with high levels of crime, violence, poverty, and corruption that put migrants’ safety at risk. While the US has promised to help them build their capacity to receive vulnerable migrants, experts caution that none of them will be ready to do so anytime soon.

The official said that the agreements apply to individuals applying for any kind of protection, including both asylum and protection under the Convention Against Torture, a United Nations treaty signed by the US among other nations.

The agreement with Honduras is one of many measures that the Trump administration has taken in recent months to make seeking asylum in the US more difficult, and in many cases almost impossible, for Central Americans.

Most of the migrants arriving at the US southern border are coming from the Northern Triangle countries of Guatemala, Honduras, and El Salvador, where crime, violence, and corruption is driving tens of thousands to flee.

A Trump administration rule already prevents migrants from obtaining asylum if they passed through another country other than their own before arriving in the US, a rule which has a much broader effect than the US’s individual asylum agreements with the Northern Triangle countries. That means that asylum seekers from any country but Mexico are ineligible for asylum if they show up at the southern border.

There are limited exceptions to the administration’s rule: those who apply for asylum in another country but are rejected may bring their claims in the US. Victims of human trafficking and migrants who traveled through countries that are not parties to certain international human rights agreements are also exempt. But for the most part, it effectively closes the door on seeking asylum at the southern border (though they are still eligible for other forms of protection).

The Supreme Court has allowed that rule to go into effect for now. But if the rule were to be struck down in an ongoing court case, the administration could use its new agreements with the Northern Triangle countries as a means of continuing to turn away asylum seekers.

The asylum agreements are another way that the US can now enforce its southern border, the senior DHS official said.

The official said that Wednesday’s agreement with Honduras will also allow the US to help develop Honduras’s asylum system, similar to the agreement with El Salvador. Honduras remains a hotbed of gang violence, largely perpetrated by the international criminal gang MS-13, which formed in Los Angeles and was transplanted to Central America after mass deportations of unauthorized immigrants with criminal histories in the 1990s. The gangs facilitate drug trafficking, extort local residents, and force teenage boys to join.

Trump reached a similar agreement with Guatemala in July, but it has yet to be ratified by its government. As part of the agreement, the US offered to expand and streamline the H-2A temporary agricultural visa program for Guatemalan citizens, promising to spur what Trump has described as a “new era of investment and growth.”

But the Guatemalan Constitutional Court has stopped the agreement in its tracks for now.

As part of the parallel agreement with El Salvador, the US has also agreed to invest in El Salvador and work on a way for about 200,000 Salvadorans who have lived in the US for about two decades with temporary legal immigration status to remain the country permanently, McAleenan and Chancellor of the El Salvador Ministry of Foreign Affairs Alexandra Hill told reporters.

It remains to be seen how the US will implement the three asylum agreements in the Northern Triangle. But taken together and in tandem with other Trump administration policies, they will make it next to impossible for migrants to obtain protections in the US if and when they go into effect.

The Good Place was groundbreaking TV. Did its finale measure up?
Travel has never been “authentic”
Isabel Wilkerson wants to change how we understand race in America
5 great movies from TIFF that flew under the radar
Here’s the real reason Trump canceled Pompeo’s North Korea trip
The cult of Sally Rooney