The Trump lawsuit testing the limits of presidential immunity, explained 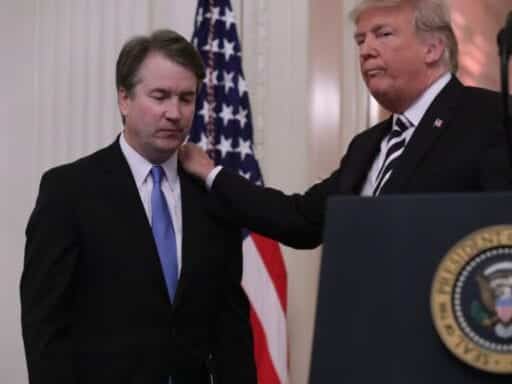 Trump v. Mazars is the biggest presidential immunity case since the Nixon administration.

On Monday, Chief Justice John Roberts handed President Trump a small victory in what could be the most important presidential immunity case since the Nixon administration.

Trump v. Mazars USA involves Trump’s effort to escape a House subpoena seeking many of his financial documents. Roberts temporarily halted enforcement of that subpoena to give the Supreme Court more time to consider whether to grant Trump a lengthier stay or lower court decisions saying the subpoena may be enforced. (As the “circuit justice” overseeing cases that arise from a DC federal appeals court, Roberts has the power to issue a brief stay while the Court is considering whether to hand down a much longer one).

Existing law is very bad for Trump in this case. It’s very clear under decades of Supreme Court precedents that the House can enforce this subpoena. So the stakes in Mazars are high. If Trump does prevail before the justices, that decision could inaugurate a new era of presidential immunity from oversight.

Last May, a federal judge held that the House Oversight Committee may enforce a subpoena seeking many of Trump’s financial documents — including, most likely, his tax forms — from Trump’s accounting firm, Mazars USA. The committee says it seeks these documents as part of an inquiry into whether stricter financial disclosure laws are needed, although it is likely (as Trump’s lawyers suggest in their brief) that the committee also wants the documents because they will offer a window into corrupt dealings by the president.

That could change soon, however, assuming that the Supreme Court decides to apply the same rules to this subpoena that it applied to politically-charged subpoenas in the past. As the Supreme Court explained in United States v. Nixon (1974), the case that required President Richard Nixon to turn over incriminating tape recordings that ended his presidency, “neither the doctrine of separation of powers, nor the need for confidentiality of high-level communications, without more, can sustain an absolute, unqualified Presidential privilege of immunity from judicial process under all circumstances.”

But it’s far from clear that this Supreme Court agrees with the ruling in Nixon — or, at least, that this Court’s Republican majority believes that cases like Nixon should be applied to President Trump.

Trump’s latest addition to the Court, Justice Brett Kavanaugh, suggested in 1999 that Nixon was “wrongly decided” (though he later praised Nixon during his Supreme Court confirmation hearing, saying that he viewed it as a sign of judicial independence). Three lower court judges, all Republicans, also voted in Trump’s favor in various lower court proceedings.

So there’s a real chance that Trump could prevail in the Republican-controlled Supreme Court — and if he does prevail, that could be a legal earthquake. The Supreme Court’s precedents point in one direction: Congress has a broad oversight power, and presidents are not above the law. Mazars could change all of that.

Mazars, moreover, is just one example of Trump seeking extraordinary legal immunity. In a closely related case, Trump v. Vance, where a New York prosecutor seeks Trump’s financial documents, Trump’s lawyer argued that a sitting president is immune from criminal investigation if the president shoots someone in the middle of Fifth Avenue. (Trump’s lawyers also asked the Supreme Court to hear the Vance case, but it’s unlikely that the Court will weigh in on that request before it decides whether to grant a stay in Mazars.)

If the Supreme Court buys Trump’s arguments, in other words, Trump could potentially gain the kind of legal immunity more commonly associated with despots than with elected officials. At the very least, decisions in Trump’s favor would signal that the Court is inclined to give Trump far more favorable treatment than it gave to past presidents.

Under longstanding Supreme Court precedent, Congress’s power to conduct oversight and issue subpoenas is quite broad. As the Court explained in Eastland v. United States Servicemen’s Fund (1975), Congress’s investigatory power extends broadly to subpoenas “intended to gather information about a subject on which legislation may be had.”

Both the trial court and the intermediate appeals court ruled that the Mazars subpoena was properly issued under this broad power because the House is considering legislation that would impose stronger financial disclosure requirements on the president, and the records sought by the House Oversight Committee could inform whether such legislation is necessary.

In response, Trump’s lawyers argue that the real purpose of this subpoena isn’t to inform the legislative process at all. It’s to determine whether Trump “broke the law.” Much of their argument echoes a dissenting opinion by Judge Neomi Rao, a Trump appointee, who claims that “the Constitution provides only one way for Congress to investigate illegal conduct by the President,” and that’s an impeachment inquiry.

This is the kind of distinction that only the most persnickety lawyer could love. While there was no formal impeachment investigation going on when the Mazars subpoena was initially issued, there is one now. So what’s the point of an argument about whether the House was engaged in a legitimate legislative process if it is free to get these documents as part of an impeachment inquiry?

The most likely answer to this question, however, is delay. If the Supreme Court buys Rao’s argument, that could force the House to reissue the subpoena as part of its impeachment inquiry, and then wait months or even years while the case winds its way through the courts again. By that point, the case could be moot.

Alternatively, Trump’s lawyers also argue that the subpoena is invalid because the “full House” did not vote to specifically give the House Oversight Committee the power to issue this particular subpoena. Again, this is the kind of argument that serves only to delay. If the Supreme Court buys this argument, the House can just hold such a vote — but that could also reset the litigation clock and allow Trump to delay the case into oblivion.

Beyond these two legal arguments, Trump’s lawyers also offer a political argument why the Court should rule in Trump’s favor. The justices should favor Trump in order to fight “the temptation to dig up dirt on political rivals.” Mazars, they claim, is “a case of firsts.” It is the “first time Congress has subpoenaed the personal records of a President that predate his time in office” and “the first time Congress has issued a subpoena, under its legislative powers, to investigate the President for illegal conduct.”

That may very well be true, but it’s far from clear why any of these claims that Mazars is unprecedented should matter legally. The Supreme Court held in Clinton v. Jones (1997) that a sitting president may be sued “based on actions allegedly taken before his term began.” And there was never a serious legal argument that the Senate Watergate hearings were unconstitutional. Mazars is distinct from past presidential investigations in superficial ways, but it is unclear why any of those distinctions have legal significance.

Indeed, to the extent that Mazars is distinguishable from prior investigations into past presidents, those distinctions cut against Trump. As the Court explained in Jones, “We have never suggested that the President, or any other official, has an immunity that extends beyond the scope of any action taken in an official capacity.” The fact that the House seeks records unrelated to Trump’s presidency cuts against Trump.

So current law is very clear that Congress may issue these subpoenas. The open question is whether the current Supreme Court believes that this law should apply to President Trump.

The immediate question facing the Supreme Court is whether to stay the lower appeals court’s decision against Trump. On Friday, Trump’s lawyers formally sought such a stay from the Supreme Court. Then, on Monday, Chief Justice Roberts temporarily halted enforcement of the subpoena while he and his colleagues consider whether to grant a longer stay. He also ordered the House to respond to Trump’s request for a stay by Thursday afternoon.

That means we will likely find out next week if the Supreme Court will grant a lengthy stay. If the Court does grant it, that would prevent the House Oversight Committee from enforcing its subpoena until after the Supreme Court decides whether to hear the case on the merits — and most likely until after the Court hands down a full decision on the merits.

Should the Court decide to hear the case, it’s possible that a decision could come as soon as next June. It’s also possible that the case could be pushed to next term — which would almost certainly delay final resolution of the case until after the election.

Indeed, if the Court grants a stay and then sits on its hands, we may never get a Supreme Court decision telling us if the Mazars subpoena can be enforced. If Trump wins the 2020 election, gerrymandering and Trump’s coattails are likely to sweep Republicans into power in the House — and then House Republicans can simply cancel the subpoena themselves.

Should the Court grant the stay, moreover, the majority is unlikely to publish an opinion explaining why they did so. Stay requests are typically disposed of in brief orders, although those orders sometimes are accompanied by dissenting opinions.

Trump’s request for a stay, in other words, is an example of what University of Chicago law professor William Baude refers to as the Supreme Court’s “shadow docket” — a potentially very consequential decision that is decided without opinion, explanation, or any impact on the Court’s prior precedents.

If the Court’s Republican majority wants to rule in favor of Trump, but save itself from the awkward task of explaining why precedents like Nixon shouldn’t control this case, they could potentially hand Trump a quiet, unexplained victory simply by granting the stay and then delaying resolution of the case until the next term.

How to solve climate change and make life more awesome
Africa’s biggest city has a Covid-19 case
How scientists correctly predicted the pandemic would last more than a year
Silicon Valley billionaires keep getting richer no matter how much money they give away
Redditors love Infinity War’s Thanos so much, 300,000 of them just faked their own internet deaths
How slavery became America’s first big business