The US and Canada didn’t make a NAFTA deal. But it’s not over yet. 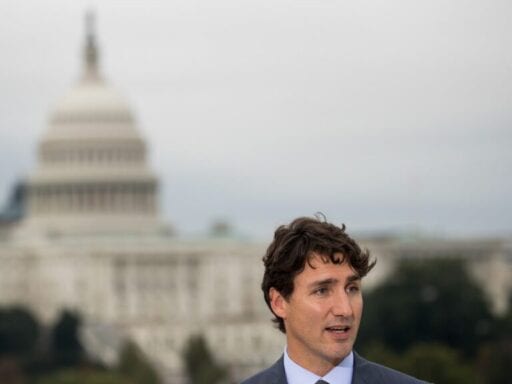 Trump’s deadline has passed, but the two sides will keep negotiating.

The Trump administration failed to reach a deal with Canada on a new version of NAFTA on Friday, missing its self-imposed deadline.

The White House said it will keep negotiating with its northern neighbor, however, in the hope of reaching an agreement soon. The administration’s decision leaves open the possibility that a revised North American Free Trade Agreement that includes Canada could still happen, though earlier this week, Trump suggested that a preliminary trade deal with Mexico could replace it.

Any new NAFTA deal would have to be approved by Congress, which strongly favors a trilateral agreement over a bilateral US-Mexico pact.

US Trade Representative Robert Lighthizer, who is leading the talks, said in a statement on Friday that negotiations were ongoing but the president would move ahead and let Congress know a deal is coming soon. “Today the president notified the Congress of his intent to sign a trade agreement with Mexico — and Canada, if it is willing — 90 days from now,” he said.

Both Canada and the US had made positive sounds about the negotiations earlier in the week, but by Friday, talks started to break down. The Canadian newspaper the Globe and Mail reported that the US and Canada remain divided over a few sticking points, including Chapter 19, a provision of NAFTA that sends trade disputes involving anti-dumping and countervailing duties to be decided before an independent panel, rather than domestic courts. The US wants to scrap it, but Canada says it’s necessary to protect its industries.

This situation worsened after Trump said he would refuse to make any concessions to Canada in leaked off-the-record comments made to reporters.

During an interview with Bloomberg News on Thursday, the US president reportedly boasted off the record that an agreement with Canada would be “totally on our terms” and suggested that his threats of auto tariffs were working, according to the Toronto Star’s Daniel Dale.

“Off the record, Canada’s working their ass off. And every time we have a problem with a point, I just put up a picture of a Chevrolet Impala,” Trump reportedly said about the negotiations, referencing his threat of placing tariffs on auto imports.

Canada and the US ultimately couldn’t reach a deal by Friday, but negotiators will be at it again next week. So NAFTA isn’t totally dead yet — but these upcoming negotiations will be critical.

The US and Canada couldn’t reach a deal by Friday. So what happens now?

Let’s be clear: This Friday, August 31, deadline to reach a US-Canada agreement on NAFTA was something the Trump administration made up.

That’s because the US president, by law, has to give Congress 90 days’ notice that he plans to sign a trade agreement. He wanted to do that by this week because Mexico’s government will change hands by December 1, when the newly elected leftist president Andrés Manuel López Obrador takes over. Trump doesn’t want to risk losing the deal he made with the current Mexican administration, so he would prefer to get a new NAFTA pact locked down sooner rather than later.

On Friday, Trump officially notified Congress about the new trade agreement. And the administration also made clear it wants Canada included, too — if Canada wants in, of course.

That can still happen, because though Trump has notified Congress that he has a preliminary deal with Mexico, he doesn’t have to deliver a finalized agreement to Congress for another 30 days. The idea is to add Canada into any agreement at that time.

That means the real deadline to carve out a new NAFTA is the end of September. Canada, the US, and Mexico will continue discussions until then.

Canada knew that Trump’s initial Friday deadline wasn’t firm and, thus, that the Trump administration was bluffing a bit.

Indeed, Canadian Prime Minister Justin Trudeau made it clear this week that Canada wouldn’t rush to make an agreement if it wasn’t in their interests to do so. “We recognize that there is a possibility of getting there by Friday, but it is only a possibility, because it will hinge on whether there is ultimately a good deal for Canada,” Trudeau said. “No NAFTA deal is better than a bad NAFTA deal.”

Canada also has an unexpected ally in this dealmaking process: Congress. Democrats and Trump’s Republican allies want any new NAFTA deal to include Canada, and they’re not eager to move ahead solely with a bilateral agreement with Mexico.

There are a few reasons why, but it’s mainly because Canada is one of the US’s largest trading partners, and the supply chains between the two countries — particularly the automotive industry — are deeply intertwined. This means that Trump can threaten to place auto tariffs on Canada, but US manufacturers and consumers will feel the pain too.

Trump could of course try to send the Mexico-US bilateral agreement to Congress as a NAFTA replacement, as he suggested in his notification to Congress.

But that seems unlikely to go over well. Lawmakers — pro-business Republicans among them — want Canada involved. It’s also not clear if Trump can legally push through a Mexico-US deal.

Trump could also take more drastic measures. He could potentially threaten to withdraw from NAFTA, or attempt to do so, though Congress would likely be able to block such a move. He could also follow through on his threat to retaliate with tariffs.

The bottom line: NAFTA isn’t dead, and the worst case scenario — that the 24-year-old agreement implodes — isn’t happening yet.

Canadian Foreign Affairs Minister Chrystia Freeland and US Trade Representative Lighthizer both said Friday that the two sides were negotiating in good faith, despite the cloud that Trump’s off-the-record comments brought to the negotiations. (Trump, meanwhile, seemed less concerned about the negotiations than the “dishonest reporting.”)

“A win-win-win agreement is within reach,” Freeland said Friday.

That win-win agreement, if it does happen, will likely look a lot like the old NAFTA, with just a few tweaks around the margins that could potentially benefit workers — even though Trump will probably come up with a brand new name.

What Trump’s taxes tell us about his foreign entanglements
This year’s Bad Sex in Fiction Award recognizes a passage comparing a penis to a small monkey
“They are coming after me because I am fighting for you”: Trump at March for Life
Martha McSally is the rare Republican woman putting gender at the forefront of her campaign
A Baltimore police officer brutally beat a black man. It’s creating new problems for the department....
Love — and sex — in the time of coronavirus