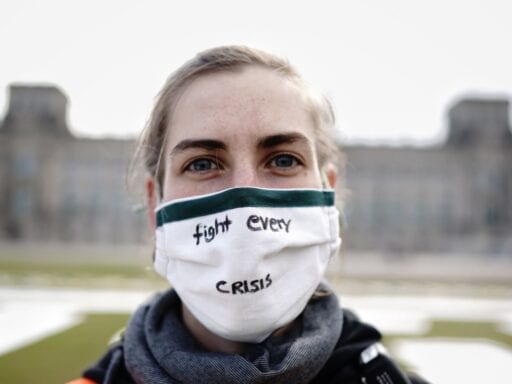 Share
Loading...
An activist from Fridays for Future wearing a face mask that reads “Fight every crisis” takes part in an alternative climate strike on the Reichstag meadow in Berlin, Germany, on April 24, 2020. | Kay Nietfeld/picture alliance via Getty Images

Nearly 70 percent of people in 14 countries say climate change is as big a threat as the spread of infectious disease.

Even amid a pandemic that has killed more than 1 million people, infected over 40 million, and tanked economies, people around the world are still extremely worried about the threat posed by climate change.

A recent poll from the Pew Research Center found that a median of 70 percent of respondents in 14 countries identified climate change as a major threat to their countries, while 69 percent expressed the same level of worry about the spread of infectious disease.

Majorities in all countries surveyed said both issues were major causes for concern. When comparing the two problems, respondents in eight countries were more worried about climate change as a significant threat. 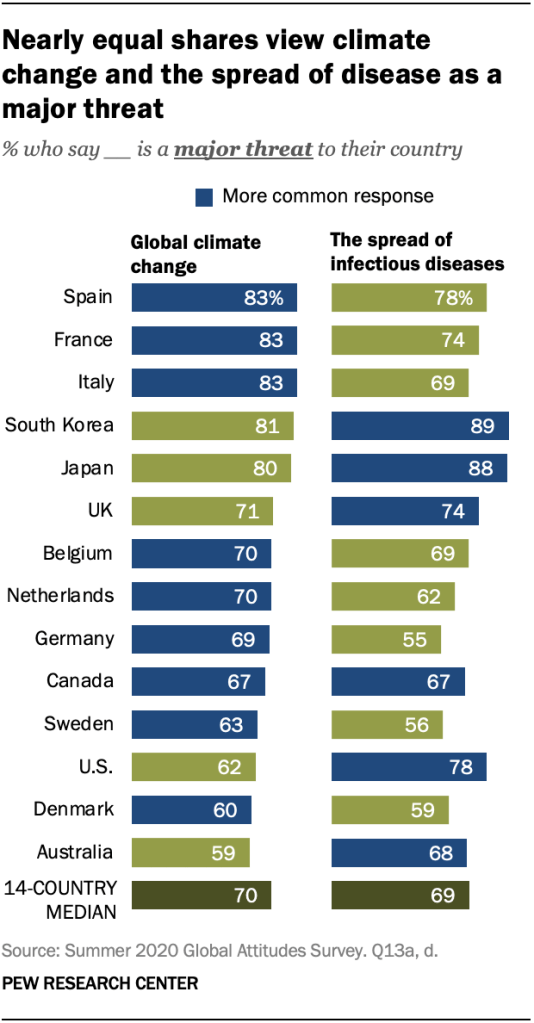 Spain, France, and Italy showed the highest level of concern, at 83 percent, while 60 percent or greater in Denmark, Sweden, Germany, the Netherlands, and Belgium felt similarly. Respondents in Australia expressed the least concern for climate change, at 59 percent.

Canada was equally worried about climate change and the spread of infectious disease, with both issues accounting for 67 percent.

In South Korea, Japan, the United Kingdom, the United States, and Australia, a greater share of people viewed the spread of infectious disease as a more significant threat than climate change, ranging from 68 percent in Australia to 89 percent in South Korea.

One in 10 or fewer of all respondents did not think global climate change was a threat.

Many of the countries witnessed a substantial increase in the percentage of people who view climate change as a major threat since Pew first asked the question. In 2013, a median of 55 percent of respondents in 10 countries said climate change was a major threat, compared to 76 percent in 2020. Concern in France grew 29 points, from 54 percent to 83 percent. No noticeable increase occurred from the last time the question was asked in 2018. 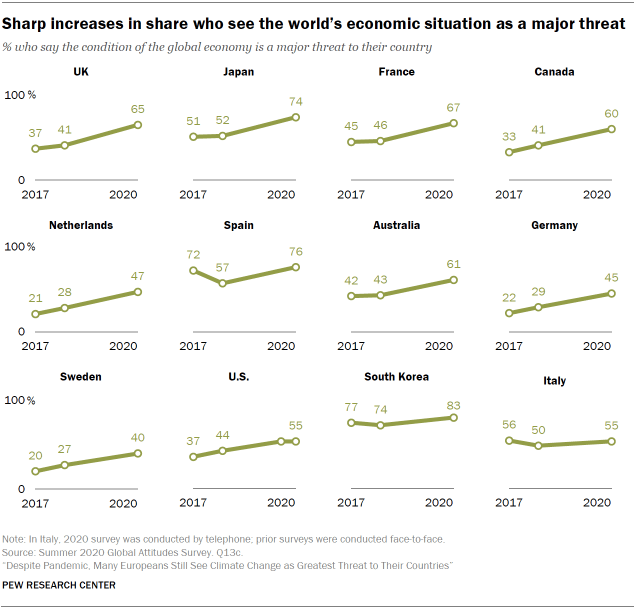 The results of the Pew Research Center poll, which was conducted from June 10 to August 3, 2020, might seem surprising given how much space the Covid-19 pandemic has taken up in our global consciousness in recent months. But there are several possible explanations.

As stay-at-home orders were issued in countries worldwide, a number of reports cited the drop in carbon dioxide emissions due to a global collapse in airline travel and a sharp decline in the number of people commuting to work. Many were forced to consider the impact of their personal choices on the environment.

The economic crisis caused by the coronavirus pandemic has also prompted governments around the world to consider “green” stimulus plans that would jump-start economies while also tackling climate change. For example, South Korea, France, and Italy have used their Covid-19 responses as a chance to cut pollution and greenhouse gas emissions — which are accelerating global warming — in the energy, infrastructure, government, and industry sectors.

Democrats in the US have put forth a Green New Deal, and the European Commission has released its own version. Both plans suggest a complete overhaul of every sector of the economy toward clean energy sources, while protecting workers and fostering technological innovation. By some estimates, the US has the capacity to do so by 2035.

Given the level of concern about global climate change across 14 diverse countries, it might finally be time for governments to take decisive action.