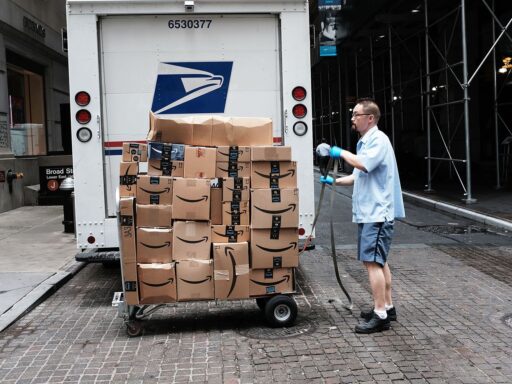 When we look back at 2020 in the business world, we’ll remember it as the year that online shopping stopped being the future of retail and catapulted firmly into the present.

On March 4, I commuted into Vox Media’s New York City headquarters for what would end up being the final time during the godforsaken year of 2020. On the way in, I made a pit stop for some coffee, spending $3.89 on a bottle of Chameleon Cold-Brew, but left without handing over a card or cash on the way out. That’s because I had made that final purchase at a cashierless convenience store owned by a certain e-commerce giant: Amazon. Nine months later, that last stop looks like an appropriate harbinger of the major changes that would sweep across a big part of American life this year: how and where we shop.

Over the next few weeks, my family, and millions of others in the US, began relying on Amazon and other shopping websites and apps in record numbers as the Covid-19 pandemic swept across the US. Masks, toilet paper, soap, and hand sanitizer were in high demand. But so were groceries, restaurant meals, puzzles, printers, and even dumbbells.

At times, government-mandated store closures in some parts of the country meant that if you needed to purchase something deemed nonessential, the only place to get it were “essential” big-box stores — or online. As a result, Amazon and other retail giants like Target and Walmart reaped the rewards, while retail chains and small boutiques that sold apparel or other “non-essential” merchandise were forced to close their doors and turn customers away. Nearly 10,000 stores in the US have closed permanently this year alone.

When we look back at 2020 in the business world, we’ll remember it as the year that online shopping stopped being the future of retail and catapulted firmly into the present. This was the year that local governments forced us to give up in-store shopping for weeks or months, and then when we had an opportunity to return when stores reopened, we mostly kept shopping online anyway.

There’s a reason people who previously shunned online shopping for stores are now sticking with it: It’s typically much more convenient than browsing through rows of aisles to track down what you need. But the acceleration in online shopping this year — which otherwise would have taken several years to happen — will have profound consequences on the way millions of Americans work; the way corporate power is concentrated; and the way local communities are reconstructed to account for the decline of retail store chains like department stores and the malls they’ve long anchored.

At the end of last year, only around 13 percent of retail purchases — excluding auto and gas sales — were made online, according to Mastercard. By the end of 2020, that figure stands at around 20 percent, or $1 out of every $5. During normal recent years, when e-commerce growth rates averaged between 12 and 16 percent, that kind of jump would have taken several years to happen. But US e-commerce sales will have grown more than 30 percent in 2020, and there’s no going back.

Amazon, unsurprisingly, has been a huge winner of this dramatic shift, growing its US retail business an estimated 39 percent this year and increasing its market share to 39 percent of all online retail in the US, according to eMarketer. The e-commerce giant has posted record sales and profits, even with early warehouse capacity issues and delivery delays, internal labor battles, and spending billions on Covid-19-related precautions.

And it showed off its unparalleled strengths right up until the end of the holiday season. While many other retailers stopped promising deliveries in time for Christmas a week or two in advance, Amazon was guaranteeing same-day and next-day delivery of some online orders made as late as December 23, thanks in part to its huge warehouse coverage across the US and the continued expansion of its own delivery network.

But Amazon isn’t alone. Walmart and Target have had huge years too, posting modest market share gains in online retail. Part of their success has come from selling groceries and other in-demand goods on the web during the early months of the pandemic, coupled with curbside and in-store pickup offerings that were already in existence for online orders.

Small businesses have also had to take their sales online. The scale of this shift is reflected in the success of tech platforms catering to small and mid-sized merchants who don’t want to rely on Amazon. Shopify, which sells e-commerce software tools to small and mid-sized merchants, has seen its revenue grow nearly 100 percent year over year in the first nine months of the year.

The Canada-based software giant has benefitted from small brick-and-mortar merchants scrambling to set up online shops amid government-mandated store closures and reduced foot traffic even when their doors are allowed to remain open during the pandemic. As a result, Shopify’s market cap has nearly tripled this year to around $140 billion as of December 28, or more than 50 percent more than that of Target, the 58-year-old discount retail chain.

Etsy, the online marketplace known for handmade goods sold by small merchants and artists, has also profited handsomely from the shift. Many online shoppers flocked to Etsy in the first half of the year to purchase masks that small merchants were producing at a rapid rate, but have since gone on to purchase other non-mask items too. By the third quarter of the year, mask sales accounted for 11 percent of Etsy’s gross sales, down from 14 percent in the spring quarter. In total, Etsy’s revenue increased more than 100 percent in the first nine months of 2020.

For individual small merchants themselves, however, success online isn’t close to a guarantee, as the recent rise of Shopify and Etsy might suggest. If you’re a small retailer and want to set up an online storefront with Shopify to avoid relying on Amazon or Walmart.com, you likely still need to buy ads from one of the other tech giants — namely, Google or Facebook — to attract customers to your own digital door.

Shopify knows this, and has started to tip-toe its way toward creating its own online marketplace to help online shoppers discover Shopify merchants by transforming a package-tracking app it already owned, previously called Arrive, into an app with more of a shopping focus. It’s now called, naturally, Shop. As for Etsy, it is now home to more than 3.6 million merchants, meaning small sellers need to fight for sales, sometimes paying a hefty cut for advertisements in order to be discovered.

No matter, for many small, brick-and-mortar retailers, the pandemic has vanquished the idea that ignoring e-commerce is a viable option. Sure, when the pandemic is finally “over,” some of the changes in our behavior — whether consumption-related or otherwise — will certainly revert to something like 2019. Popular restaurants and bars will once again attract crowds. Travel will rebound as should live sporting events and concerts.

But many of the changes in how we buy things will stick. When it comes to the purchase of essential consumables — think toothpaste, soap, and toilet paper — there’s little to no advantage gained from buying those items in person versus online, unless you are saving considerable money by making bulk purchases at a warehouse club like Costco.

The main obstacle to purchasing some of these low-priced goods online is the order minimums some online retailers require to make it economically feasible for them to ship them out. But subscribing to shipping memberships like Amazon Prime or Walmart+ can eliminate shipping minimums, or you can do what my wife and I often do on Target.com and save items in our virtual shopping cart until we need enough items to cross the threshold and place an order.

For people who tried out ordering groceries online for the first time during the pandemic, many will never return to consistent in-store grocery shopping or, at a minimum, will be more willing to place the occasional grocery order online. Case in point: For the first time ever, the giant grocery chain Kroger is expected to crack the Top 10 list of largest online retailers in the US by the end of 2020, according to eMarketer estimates.

The retailer being replaced by Kroger in the top 10? That would be Macy’s, the one-time department store giant that was already floundering prior to this year’s global health crisis; the legacy retailer said in January that it was planning to close 125 of its 800-plus stores. The pandemic was the final nail in the coffin of several department store chains and made the uphill battle much steeper for ones like Macy’s that were not in dire straits but were indeed already struggling. A long-deteriorating middle class, lack of merchandise differentiation, and indifferent customer service all played a role in ceding customer loyalty to discount chains as well as online retailers.

And things will get worse for the department store chain sector, which employs more than a half million Americans today. More than half of all mall-based department stores are expected to close by the end of 2021, according to estimates by Green Street Advisors, a commercial property research firm. And with department stores accounting for one out of every three square feet in shopping malls, the mall industry is likely headed to a crisis too.

So where do we go from here? The shift in our shopping behavior that 2020 accelerated will certainly make our lives as consumers easier in many ways — and that counts for something. But we don’t exist solely as consumers, nor do our friends, family, and neighbors. We are members of communities that count on physical retailers as major employers and will be forced to reinvent themselves after surviving a pandemic and a recession. We, our friends, family members, and neighbors work retail jobs to make ends meet or maybe even still as careers, if we’re lucky. More and more of the hirings in retail are happening inside e-commerce warehouses, where the roles might pay better but where the work is often more grueling.

Despite the hope that Shopify’s success this year may bring to small- and mid-sized merchants carving out independent e-commerce futures outside of Amazon’s walls, this truth about 2020 remains: Amazon, the retail wrecking ball, has gotten more powerful this year, not less. And as we push more of our purchases online, the tech giant’s power will only grow.

Kamala Harris’s mysterious Kasowitz question during the Kavanaugh hearings, explained
The Pentagon’s diversity training needs an update. A new bill could make that happen.
What the Sanders campaign’s defenders get wrong — and right
2020 Democrats enter the final phase of their Iowa campaigns at the state’s largest political event
GPT-3, explained: This new language AI is uncanny, funny — and a big deal
What President Joe Biden would do to stop Covid-19