“They want to take care of certain little tiny fish”: Trump’s Hannity interview was off the rails 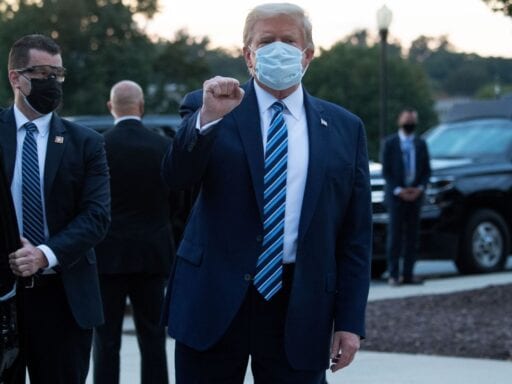 Trump sounded hoarse during his conversation with Hannity. At two different points his voice gave out.

Yikes. Trump’s voice is extremely hoarse and at one point gave out. pic.twitter.com/kf0gwNyPCI

That, of course, suggests Trump is still dealing with coronavirus symptoms, which isn’t surprising if you buy the White House’s timeline about him only being diagnosed a week ago. (Concerns have been raised over the potential side effects of dexamethasone, a powerful steroid that his doctors are using to treat the disease.) But what was surprising was Trump’s insistence that not only is he ready to resume campaigning, but he’s hoping to have back-to-back campaign rallies on Saturday night in Florida and Sunday night in Pennsylvania.

Concerns have been raised over the potential side effects of dexamethasone, a powerful steroid that his doctors are using to treat the disease.

With Trump trailing Joe Biden in the national polls by about 9 points and with under three weeks left until Election Day, the president likely feels he has little choice but to get out there and make a final push. His showing on Hannity, however, suggested doing so this weekend — while questions are still swirling about his health — would be extremely premature.

The campaign rallies Trump was holding before his coronavirus diagnosis were the height of irresponsibility. Trump mocked public health measures to slow the spread of the virus and instead packed thousands of people, most of them not wearing masks, into small spaces (sometimes indoors) without social distancing.

But if Trump’s conversation with Hannity is any indication, the president is ready to turn the recklessness up to 11. That’s because he’s apparently prepared to resume rallies before he’s even tested negative for the coronavirus.

The interview opened with Hannity asking Trump if he’s “been tested recently” and if he “tested negative.” But instead of even pretending to answer the question, Trump launched into a rant about the coronavirus drugs he credits with his recovery and promised, implausibly, to provide everyone with the same treatment he got.

“I’ll tell you, I took this Regeneron — it’s phenomenal. And Eli Lily has something very comparable, and it’s phenomenal,” Trump said, referring to a monoclonal antibodies cocktail made by the company Regeneron. “It’s a whole new day, it’s a whole — and if you go back a few months, nobody even thought about this stuff. We came up with it. And I’m going to have it delivered to every hospital.”

Trump won’t tell Hannity if he’s had a negative coronavirus test. He just ignores the question and starts ranting. pic.twitter.com/GOtYbRCDqv

Trump never answered the question about if he’s been tested for coronavirus in recent days and what the result was if he took one. The idea he wanted to get across is that regardless of that, he’s ready and raring to go.

“I think I’m gonna try doing a rally Saturday night, if we have enough time to put it together, but we wanna do a rally probably in Florida,” Trump said. “Might come back and do one in Pennsylvania the following night, and it’s incredible what’s going on. I feel so good.” (Fox News reported Friday that Trump’s return to the campaign trail is likely to not happen until Monday.)

But Hannity, who, suffice it to say, is not known for pushing back on Trump, circled back to the question of whether Trump has had a test since his diagnosis. Trump’s response indicted that either he hasn’t or has tested positive.

“Well, what we’re doing is probably the test will be tomorrow, the actual test, because there’s no reason to test all the time, but they found very little infection or virus, if any,” Trump said.

Holy shit. Trump, who won’t say if he’s tested negative for coronavirus (so he either hasn’t been tested or is still testing positive), says he plans to do a rally this Saturday night in Florida. pic.twitter.com/e6s5O5kEHY

Trump’s obfuscation was in line with the White House’s approach to answering questions about his health he first announced his positive test last Friday before being hospitalized later that same day. It would be one thing if he was a private citizen, but people have every right to know whether the president is capable of carrying out the duties of his office.

For this president, however, those duties have rarely amounted to much more than lashing out at his perceived foes in an effort to bolster his own standing. The rest of Trump’s interview with Hannity demonstrated he’s at least able to do that much.

Trump’s interview with Hannity came hours after the FBI announced that six men associated with a right-wing militia group were arrested in charged in connection with a plot to kidnap and kill Gov. Gretchen Whitmer (D-MI). Whitmer, who implemented aggressive public health measures that have successfully slowed the spread of coronavirus in Michigan, has been a frequent target of Trump’s abuse, and the social media profiles of the suspects revealed they’re fans of his.

But instead of condemning the suspects during his interview with Hannity, Trump gave credence to their cause, attacking Whitmer for a statement she made earlier in the day linking the plot with Trump’s rhetoric.

“I see Witmer today, she’s complaining, but it was our Justice Department that arrested the people she was complaining about,” Trump said. “Instead, she goes and does her little political act, and she keeps her state closed … what she’s doing is a horrible thing to the people.”

“I see Witmer today, she’s complaining, but it was our Justice Department that arrested the people she was complaining about… what she’s doing is a horrible thing to the people”- Trump attacks Gretchen Whitmer, the victim of a kidnapping/execution plot hatched by his supporters pic.twitter.com/NQHcIKfA50

He just can’t help himself. And a short time later, Trump did his part to incite violence against another Democratic governor — Ralph Northam or Virginia — falsely claiming Northam endorses the “execution” of babies. (Ironically, the Regeneron monoclonal antibodies treatment Trump has spent the week touting was developed using cells derived from aborted fetuses.)

Trump’s comments on environmental policy were completely beyond parody

While Trump’s comments about Whitmer and Northam were scary and depressing, his attacks on Gov. Gavin Newsom’s (D-CA) stewardship of the environment were absurd. Asked by Hannity to share his thoughts on the Green New Deal, Trump started ranting about “certain tiny little fish” and how California “should let water come down from the north.”

“California is gonna have to ration water. You wanna know why?” Trump began. “Because they send millions of gallons of water out to sea, out to the Pacific. Because they want to take care of certain little tiny fish, that aren’t doing very well without water.”

“California is gonna have to ration water. You wanna know why? Because they send millions of gallons of water out to sea, out to the Pacific. Because they want to take care of certain little tiny fish, that aren’t doing very well without water.” — Trump pic.twitter.com/g0PrXZRgOq

It’s unclear what Trump was talking about, although California political reporter Doug Sovern inferred he was referring to Delta Smelt. But Hannity didn’t press the point, and by the end of Trump’s rant, he didn’t seem to know how to respond.

“Number one, [California] should let water come down from the north, and accept it instead of throwing it out to the Pacific. But you always have to have forest management” — Trump’s climate change plan (Hannity doesn’t seem to know how to respond to this) pic.twitter.com/1Y3ej5Vy3A

The interview ended on a more ominous note, with Trump characterizing Vice President Mike Pence’s refusal at the VP debate to commit to a peaceful transition of power as his “best answer” of the night.

But the reality is that unless Trump can chip away at Biden’s robust lead in the national polls, his feelings about the peaceful transfer of power might not matter much. And if anything, Trump’s ongoing bout with the coronavirus has seemed to make him sound more unhinged — something that’s unlikely to improve his collapsing support among seniors and suburban women.

Elizabeth Warren’s really simple case for breaking up big tech
Quarantine cooking is about more than just feeding yourself
Why the deal for striking GM workers is hardly a victory
CBS’s Evil is one of TV’s wildest shows, disguised as a network procedural
Clubhouse got a little less creepy thanks to a recent update
“The Meritocracy Trap,” explained