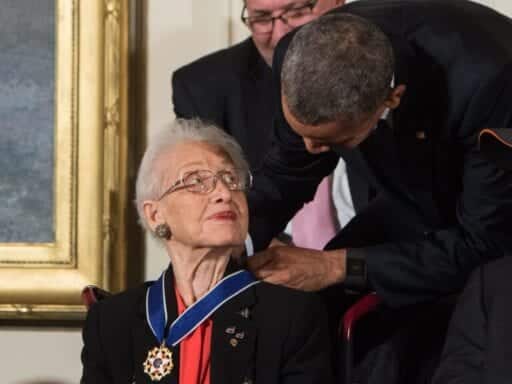 Johnson, who died Monday at age 101, did groundbreaking work in helping return astronauts safely to Earth.

Katherine Johnson, who died Monday at age 101, was a pioneer in many ways: She was an early employee of NASA (and even worked at the agency that predated it), and an African American woman working in a field hugely dominated by white men. She was also a pioneer in that her work helped put humans in space, and returned them safely home to Earth.

Before rising to pop-culture fame with the book and movie Hidden Figures, before being awarded the Presidential Medal of Freedom, Johnson created and calculated some extremely important equations to make America’s adventures in spaceflight successful. As Bill Barry, NASA’s chief historian, told the Washington Post in an obituary: “If we go back to the moon, or to Mars, we’ll be using her math.”

Here’s what she did, and why she’ll be remembered for a long time.

NASA gave Johnson landing zones. She figured out how to get spacecraft there.

In the 1960s, NASA had figured out how to launch a human being aboard a rocket into space. That was an extremely impressive feat. But equally hard was getting that human to land safely back on Earth.

One of the trickiest bits: the spacecraft couldn’t just land anywhere. Were an astronaut to touch down in a desolate corner of the ocean, without any land in sight, it could presumably take days to be rescued (if rescued at all).

This means that Johnson needed to calculate the entire trajectory of the flight — where it started, how fast it went, and where it would land. The missions to send humans to space and back had to be precise and choreographed. Johnson’s math enabled that choreography.

She best explained her job in her own words: “Early on, when they said they wanted the capsule to come down at a certain place, they were trying to compute when it should start,” Johnson said in a 2008 NASA interview. “I said, ‘Let me do it. You tell me when you want it and where you want it to land, and I’ll do it backwards and tell you when to take off.’ That was my forte.”

And so, she calculated the trajectory for Alan Shepard’s historic 1961 flight that put the first American in space, and landed him in the Atlantic Ocean.

But greater challenges were to come. Shepard visited space, but he was not put into orbit around the Earth. He went up, and came down. Flying, essentially, in a simple parabolic arc.

Orbit — having the spacecraft encircle the Earth — is harder.

In orbit, not only is the spacecraft moving at 17,000 mph, the Earth below is also moving, rotating on its axis.

Here, Johnson’s challenge was the same. She had to take a landing zone for an orbiting spacecraft, and calculate backwards: figuring out the math for how the spacecraft would arrive there.

She did this work to prepare for Astronaut John Glenn’s historic 1962 mission when he became the first American to orbit the globe.

This work meant juggling a lot of different variables: where the rocket took off, where it entered obit, how quickly it was moving in orbit, the rotation of the Earth beneath it, the angle at which it ought to reenter the Earth, and the location of the splashdown.

In figuring it out, she became the first woman to ever co-author a research paper at NASA. Entitled “Determination of Azimuth Angle at Burnout for Placing a Satellite Over a Selected Earth Position,” the paper — with co-author Ted Skopinski — basically explains where an orbiting spacecraft should fire its reentry rockets to land on a particular portion of the Earth.

Famously, before Glenn took off on his first orbital spaceflight, he requested Johnson double-check all the orbital math of the mission by hand — being slightly distrustful of the new-fangled electronic computers that NASA had installed to do the work.

Glenn’s flight, and the math making it happen, was the subject of the 2016 film Hidden Figures, in which Johnson, as well as other African American women working at NASA, are given the spotlight amid a workforce that’s largely white and male.

But Johnson’s work didn’t stop there. She worked on the Apollo program, which brought humans to the moon for the first time: Her calculations were critical in getting the lunar lander to meet back up with the command module in orbit around the moon. She later worked on the space shuttle program, as well as satellites, before retiring in 1986. Today, there’s a computational research facility at NASA’s Langley campus named after her.

Her mathematics is an important legacy. But so is the legacy of her recent celebrity. For too long, Johnson’s contributions to the space program were unknown by the public. The story of America’s success in the space race has largely been told through the stories of the men at NASA. But Johnson was there, too. And it’s important to remember that.

The public needs more diverse role models in science. “When you think about what a scientist means, you probably think of an Einstein figure — a man in a lab or at a chalkboard with fuzzy, unkempt hair,” as my Vox colleague Julia Belluz has written. “When you think of a scientist’s voice, you might conjure Neil deGrasse Tyson or Carl Sagan. With these voices and images so pervasive in our culture, it’s easier to associate ‘scientist’ with ‘man’ — and in particular, ‘white man.’”

Women scientists like Vera Rubin, Nettie Stevens, Henrietta Leavitt, Rosalind Franklin, Johnson and so many others ought to be just as famous. Today, too many women — and minorities — still feel unwelcome in many corners of science. Johnson’s legacy shows them they have every right to be there.