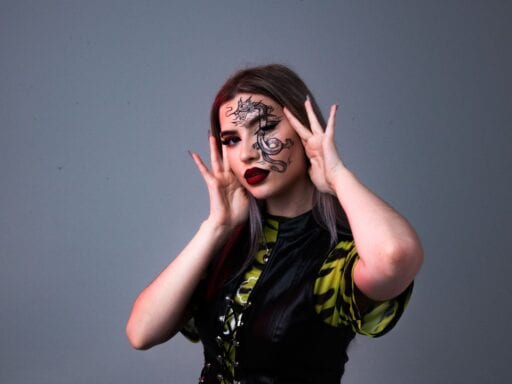 Plus, Sasha Obama? On TikTok?!

For a makeup influencer, Halloween is the busiest time of year — it’s the time when even regular people attempt the high-concept or intimidatingly intricate looks peddled by professionals, and they’re looking for inspiration. Which is why when I hop on a Zoom call with TikTok beauty guru Abby Roberts in late September, she’s in the middle of painting a sledgehammer to use as a Harley Quinn prop.

“It’s insane!” she says of the amount of shoots she has planned for the next few weeks.

19-year-old Roberts, whose face I’d seen roughly a thousand times on my For You page but whose voice I had never heard (she’s from Leeds, so she’s got a fun northern English accent), has skyrocketed to 13 million followers on TikTok and is one its most recognizable stars. Among her most iconic transformations: Jojo Siwa, Joe Exotic, a T-Rex, Nintendo Mii, and the cowboy emoji, plus a lot of really cool vibey ones that she pairs with her closet full of e-girl fashion staples.

What started as an obsession with beauty YouTubers when she was 11 has now led to a wildly lucrative career working with brands like Charlotte Tilbury and Maybelline. We chatted about what it’s like being famous in quarantine, plus Americans’ obsession with British chav makeup. (I did, however, forget to ask her for a tutorial on anime cosplay eye makeup, so if anyone has a good one, I need to learn by Saturday!)

How’d you get into makeup?

Growing up, I was always into art. When I was 11, I started watching YouTube videos of all these beauty gurus like NikkieTutorials and Jaclyn Hill, and I wanted to have a go myself. So I uploaded my first YouTube video when I was just 11. It was me doing my sister’s Halloween makeup or something, and it was terrible. It was so bad, but we were just having fun.

When did you first blow up?

I became big on Instagram probably two years ago, when I became friends with James Charles. I’d recreate his makeup looks, and that’s how he found me on Instagram and shared me on his Instagram story. I gained maybe 100,000 followers overnight, and TikTok really just took it to that next level.

People love the really crazy and kind of stupid looks, so I turn myself into all sorts of characters like a Teletubby or something. People love that.

Have you noticed a shift in your own aesthetic from when you started on TikTok?

There was no aesthetic to begin with! I was just trying everything, but now I feel like I’ve really found my specific style with makeup. People know what they’re getting when they’re coming to my page. Before TikTok, my style was so boring, and now I’m a full-on e-girl with purple hair.

It’s a lot less polished and airbrushed than your typical Instagram or YouTube beauty guru. It’s kind of more relatable as well, which is why I really like TikTok. You’re showing all the behind-the-scenes, that side of things. The style of makeup is more alternative as well.

One of the big trends on TikTok right now is to put on chav makeup — a really unblended contour, nude lips, and way too much eyeliner. Is that weird to see, having grown up in the UK?

I was that person! I was a chav, that’s how I know how to do [the makeup]. It was a huge thing in probably 2014, just every British girl had no idea how to do makeup. There weren’t a whole lot of tutorials on YouTube and everything, so we were kind of all just terrible at it. Grime music is resurfacing on TikTok, so all the British people find that hilarious, how the Americans have just discovered it because of TikTok. It’s so funny.

How do you separate your TikTok life from your real life?

Honestly, it’s really difficult because you’re working and you’re on TikTok looking for videos to make, and then you’re going to TikTok for fun, but it never really switches off. You’re always looking at what to do next.

But I think it’s all about introducing content gradually to your followers. I was very, very makeup-focused last year to the point where I felt like I was being restricted. I couldn’t post any other content and people wouldn’t like it, and it was really difficult for me mentally trying to keep up with doing these intense looks constantly. So I gradually just introduced my lifestyle and fashion content. My followers responded really well to it — I was really lucky that they still like that stuff — and now I’m able to enjoy lots of different types of content.

I think it’s good to take a step away from it. I am still good friends with a lot of the people that I went to school with and whenever I feel that online is too much, I just go and spend some time with them and like ground myself, spend time with my family, get back into reality again, take a little break from social media.

What’s your advice to someone who wants to get big on beauty TikTok?

Associate yourself with the right people and try to stay away from the kind of shady characters in this industry. It’s important to make good friends that you can genuinely trust. Work hard on your content. Don’t become lazy with it just because something is popular. Stay true to yourself and the type of content that you like to create.

Sasha … Obama … on … TikTok?!! (Her friend deleted the videos, but they’re cute and fun and oh god please do not let the alt-right try to turn this into some weird scandal.)

am I crazy or is this Sasha thee Obama pic.twitter.com/yLDgsb6NgY

Britney Spears wants her father to permanently step down as her conservator
How not to be a jerk while ordering groceries during a pandemic
US Park Police uses “tear gas” in new statement. Earlier, said using term was a “mistake.”
The new UK coronavirus mutations, explained
India’s farmers are still protesting — and things are turning violent
Climate and energy news in 2018 actually wasn’t all bad