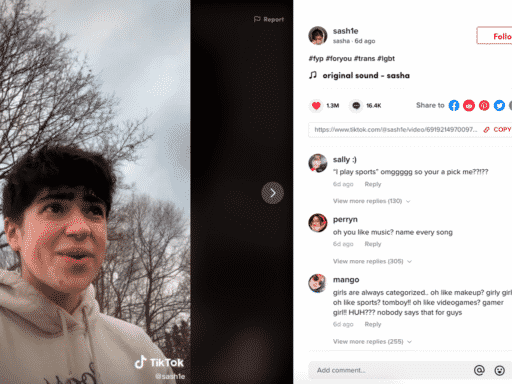 “Try and name one thing that girls can like and won’t get made fun of.”

Quick: Think of an interest or hobby a young woman can have that she couldn’t possibly be made fun of for. You might sensibly say something like “biking” or “pottery” or “baking,” but the caveat here is that in order for this thought experiment to work, you also have to have the mind of a teenager on TikTok, where people are constantly teasing each other in the most brutal ways.

This is the latest TikTok trend, and by “trend” I mean I’ve seen two videos about it but they both went extremely viral. “I keep seeing videos that are like, ‘Try and think of one interest that a woman can have that she won’t get made fun of for,’ and I really try and think about it,” begins a video from a 19-year-old TikToker named Sasha. “There is fucking nothing. Nothing.”

Some examples Sasha gives: If a girl says she likes Netflix, then people will accuse her of being stuck in the era of 2014 Tumblr. If she’s into makeup, she’s too into herself and her gender. If she likes video games, she’s a “bruh” girl. If she’s into fashion, she’s probably just one of those girls who wears big pants and a tiny top and turns up the saturation on her photos in an ironic way. If she likes reading, she “thinks she’s the main fucking character.” The video has almost 3 million views.

Most of these insults will probably make zero sense unless you spend a lot of time on TikTok. Because the way the app has established hyperspecific identity markers is … concerning. Teen girls and their interests have always served as punchlines, but on TikTok, once enough teen girls publicly enjoy something, the backlash can grow even bigger.

Take the concept of the VSCO girl, which in the summer of 2019 went from a niche self-deprecating joke to an embarrassing catchall term, all because some high school girls liked to wear big T-shirts and scrunchies. Because of how far the joke was able to spread on TikTok and how the style became a sort of costume, nobody really dresses like that anymore.

The “VSCO girl” phenomenon is basically happening all the time now. As I wrote about last week, TikTok accelerates meaningless cultural cycles faster than any machine or platform ever has, which means that as soon as something gets popular enough, it’ll trigger a near-immediate backlash. If a few girls on TikTok edit their pictures or dye their hair or do their eyeliner a certain way and go viral, within weeks that thing will probably be deemed cringe, outdated, or outright problematic.

Some of this has to do with the TikTok interface. The ability to duet or riff on other people’s videos often make the reactions even more entertaining than the video itself, and because TikTok automatically shows you the most highly rated comment first, reading the comment section is half the fun of watching in the first place. One somewhat troubling thing I’ve noticed myself doing is imagining what the comments are saying about a video before I even read them. Like, if I see a video of a girl with a slightly larger forehead, I already know that someone will have commented “looks like she’s got a lot on her mind” or something. Which does not feel great!

This is all connected to the ways in which it’s so easy to tease girls for the things they like. Another guy made a similar video to Sasha’s on TikTok, captioned with “try and name one thing that girls can like and won’t get made fun of,” and all the comments are some variation of “jokes on you its” and “c’mon y’all we obviously have” (the joke being that there are none). “Girls can’t even like hydro flasks without being made fun of … literal water bottles,” someone wrote. “I once got made fun of for not littering,” said another.

It’s not TikTok’s fault that our culture simultaneously devalues and sexualizes teenage girls, but I do think it gives us many, many more ways to reinforce that devaluation and sexualization. When something like “VSCO girl” or “bruh girl” gets a lot of attention on TikTok, it’s another addition to the backpack full of potential put-downs all of us carry around in our brains. It’s now nearly impossible to be a teenager and not fall into some kind of niche identity bracket that can be used against you. Avoiding judgment is no longer an option, if it ever really was before.

The story doesn’t have an answer, because of course there isn’t one beyond all the ways that misogyny is socially acceptable. Just like there’s no answer to the question of what interests a girl can have without being made fun of, because there isn’t one. The first step to change is, I guess, acknowledging the problem.

November and Thursdays are the same thing. They just are!

dolphins and horses = november and thursdays

Alexandria Ocasio-Cortez’s DNC speech emphasized the need for systemic change
New House Judiciary Committee report defines impeachable offenses
Study: Biden can unite progressives and swing voters with a focus on climate
A second Trump term would mean severe and irreversible changes in the climate
Johnson & Johnson brings another effective Covid-19 vaccine to the arsenal — in a single dose
11 films to watch if you loved — or hated — Hillbilly Elegy