This week in TikTok: How does TikTok know I have ADHD? 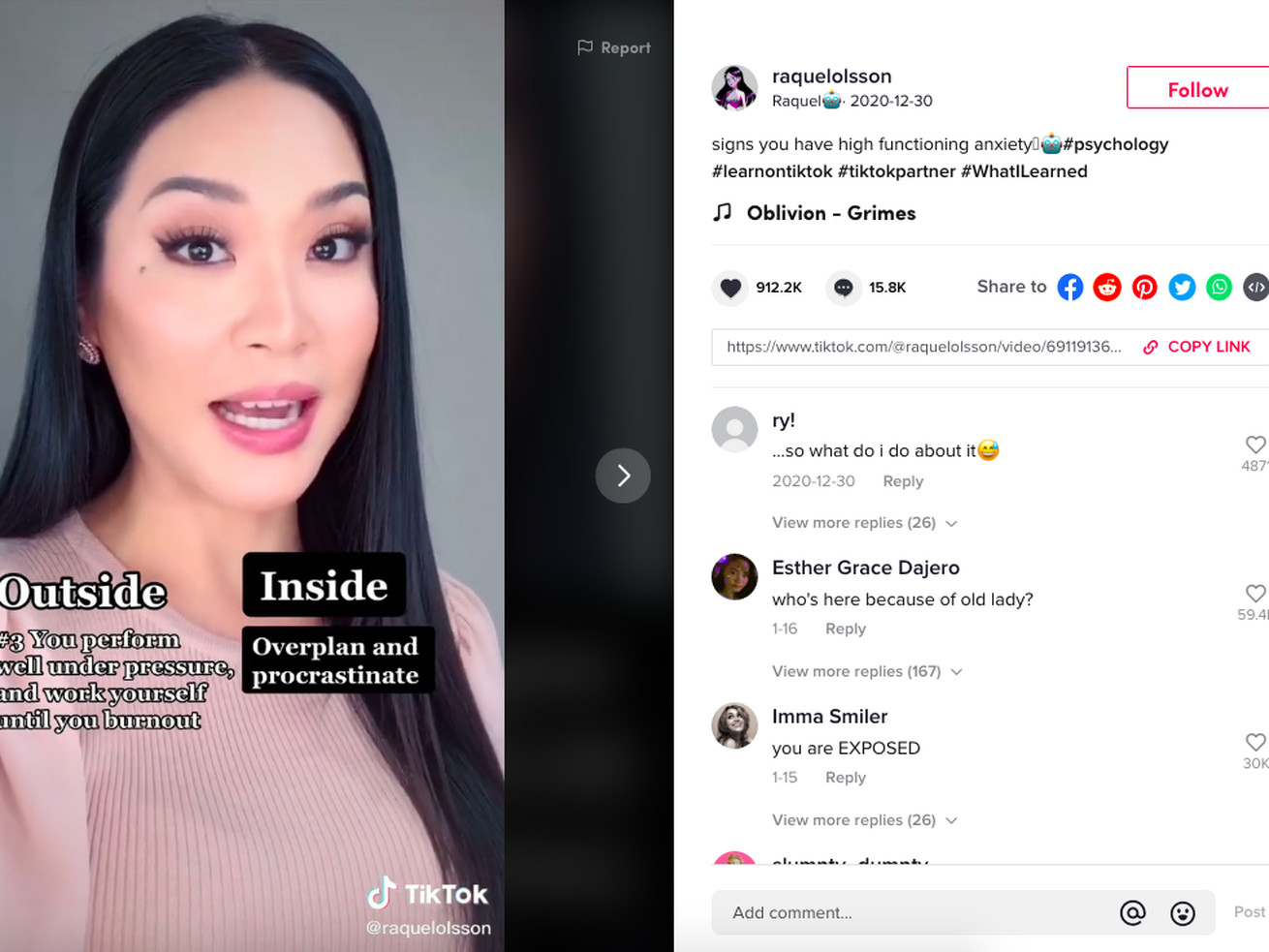 And is it helping anyone?

There’s a video I saw on TikTok that’s stuck with me for the past few months. It’s called “4 hidden signs you have high-functioning anxiety,” and in it a woman describes a person who is a “high achiever” on the outside but an “overthinker” on the inside, who appears “put-together” and cheerful but “needs reassurance” and is secretly a people-pleaser, who works until they burnout but also over-plans and … also procrastinates?

Are you thinking, “Oh god, that’s totally me”? Of course you are. The qualities she describes are how most people experience life, and the contradictory traits belie the fact that everyone falls somewhere on the spectrum of “confident” to “insecure,” of “overplanner” to “procrastinator.” Often those traits coexist or are in flux, depending on the context.

The other issue here is that “high-functioning anxiety” is not an actual medical diagnosis. But it sounds like it could be one, which is why it’s so tempting to believe. TikTok is full of videos like this, put-a-finger-down challenges that supposedly prove you were raised with a “narcissistic parent,” misleading framing of psychological studies to assert dubious conclusions, and straight-up misinformation (there’s even a psychology professor on TikTok whose whole account exists to debunk the claims that go viral on the app).

Arguably no part of mental health TikTok is as omnipresent or as fraught as ADHD TikTok, where professionals and people with ADHD attempt to share information and experiences about how to cope and what signs to look out for if you think you might have it. ADHD, which is often mischaracterized by stories of parents who just want to drug their children or adults using phony diagnoses to abuse stimulants, has already been heavily stigmatized for decades; the discussions on TikTok typically stem from the response to that stigma, where folks remind each other that their symptoms and shame are okay, and that they’re in fact quite common.

I’ve been diagnosed with and medicated for both ADHD and anxiety, and I sometimes find these videos to be a welcome reminder that I’m not alone in the frustration (and embarrassment!) of “bad brain,” as I affectionately call it. But more often I find them completely exhausting. So much of the experience of TikTok feels like being funneled into increasingly niche categories that, because TikTok’s home feed is literally called the “For You” page, supposedly reflects some referendum on your innermost self.

Isabel Munson wrote a great piece about this, and the problems with it, last week for Real Life magazine. “What you see on TikTok can then make you question who you are, as if the app must know something you don’t,” she writes. This can be a good thing — many are coming to terms with their bisexuality with help from their TikTok algorithm, for example — but it can also reinforce the idea that there is, actually, an endgame here, that if TikTok can show you new parts of yourself that someday, with enough scrolling, a complete picture will emerge.

This isn’t how identity works, though. On TikTok, labels are “configured as a condition to be uncovered rather than articulated or expressed,” Munson writes. “Whereas a therapist might question the usefulness of identifying oneself as permanently aligned with whatever struggle one is experiencing, engagement-driven platforms help frame conditions as points of identity, badges of honor.”

It’s not altogether shocking that an app mostly populated by young people places an enormous focus on self-discovery and splintered identity signifiers; like the high school cafeteria in a teen comedy, subcultures are grouped by table whether everyone fits perfectly or not, and most people are just trying to find a place to sit. It’s also not surprising that so many of TikTok’s favorite labels — ADHD, anxiety, bisexuality, narcissism — tend to populate a spectrum that everyone, regardless of whether they know it or not, falls on somewhere.

And yet, it’s also just sort of fun to pathologize the personality traits of each other and ourselves (see: astrology). A far less potentially harmful version of this phenomenon is explored in Kaitlyn Tiffany’s latest at the Atlantic on Aesthetics Wiki, the website that meticulously categorizes digital aesthetic subcultures like “romantic academia” and “traumacore.” “In adolescence and young adulthood, there’s ‘a strong drive to articulate one’s identity’ … and in the social-media age, a natural and significant way of doing that is through choosing and arranging images,” she writes. If no one enjoyed this stuff, there would be no BuzzFeed quizzes, no fandoms, no such boundary between the idea of a “cat person” and a “dog person.” No one would live in a world where you could overanalyze your crush’s birth chart with your friends, and who would want that?

The problem tends to arise when the personality diagnoses in question are treated like actual medical diagnoses, when in reality what the viewer is most likely suffering from is the general misery of being a person. And the best way to deal with that, perhaps, is not to lament the idea that you might not be extraordinarily unique, but to find relief in the fact that sometimes everyone else feels this way, too. Or at the very least, by taking advice from an actual professional.

A Scranton news station has a hotline where people call in with random comments and then it airs them. Imagine Parks and Recreation, plus Rust Belt accents. It’s so good.

System Failure
5 questions about labor strikes that you were too embarrassed to ask
Even while sick with Covid-19, Trump sees masks as a symbol of weakness
House Democrats’ top priority if they win in November is a sweeping anti-corruption bill
Chuck Schumer wants to rename a Senate office building after John McCain
Candidate for governor breastfeeds in family-focused ad