To build the wall, Trump is sacrificing airport security during the government shutdown 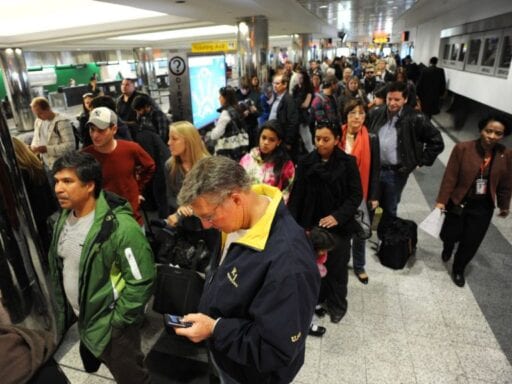 Hundreds of TSA agents have called in sick, and airport security officials may have to loosen standards.

The partial government shutdown is dragging on over the $5 billion President Donald Trump wants for his wall along the US-Mexico border, a political crisis that may be weakening security at a much more common point of entry for immigrants: airports.

According to CNN, hundreds of Transportation Security Administration officers who were expected to work have called in sick. “This will definitely affect the flying public who we [are] sworn to protect,” President of the National TSA Employee union Hydrick Thomas told CNN. Their absence will not only increase airport frustrations for travelers, but could also lead to skimping on safety precautions.

Because TSA agents are deemed “essential,” they must come into work even when they are not guaranteed a paycheck as long as the government is shut down. So while they will be paid for their work eventually, they have no clue when exactly that day will come.

According to CNN’s sources, airport screeners will likely do fewer random pat-downs, bag inspections and other screenings. That could create a potential security vulnerability — an ironic, if dangerous, situation given the root cause of the shutdown is a fight over people coming into the country.

Union officials say this isn’t part of an organized action, but the number of agents who call in sick will most likely increase. Many agents who are single parents may not be able to afford childcare, or they may be finding cash-paying jobs while the government is shutdown, as a paycheck on January 15 is not definite. Many have not been paid since late December.

According to WNYC, TSA is one of the lowest-paying federal agencies, with the typical starting salary of a TSA agent being $17,000 (other estimations say it may be closer to $25,000). And with Trump declaring the shutdown could last for “months” or even “years,” it’s easy to see why many calling in or looking for other options.

Airport are a bigger source of illegal entry than the border

The government shutdown has persisted because the president has resisted his own administration’s attempts to negotiate around the $5 billion he wants for his infamous border wall. Trump has threatened to veto any bill that does not include the money, arguing that the wall is a necessary security investment, often citing mangled statistics that are supposed to prove his point.

This weekend, White House press secretary Sarah Huckabee Sanders told Fox News’s Chris Wallace that 4,000 known or suspected terrorists come into the US illegally and the southern border is the “most vulnerable point of entry.” However, Wallace pushed back, pointing out that the 2017 statistic Sanders is citing is actually refers to stops made by Department of Homeland Security across the globe, and mostly at airports.

In fact, in the first half of fiscal year 2018, US Customs and Border Protection reportedly only encountered six immigrants on the US-Mexico border whose names were on a federal government list of known or suspected terrorists, according to NBC News.

So while the Trump administration is prepared to keep the government shutdown to get funding for a wall that will supposedly protect Americans, it is actually weakening the security in gateways where people have actually been stopped — airports.

The strain on unpaid TSA agents, and resulting weakening of security procedures, seems to align with speculation that the Trump administration was not aware of what would actually happen during a government shutdown, including the fact that 38 million people would lose their food stamps or thousands of Americans would face eviction without the Department of Housing and Urban Development. It is simply dealing with the fallout as it happens.

Regardless of what the administration knew, travelers will certainly feel the pain at airports. Some travelers are already feeling the effects of lower security and longer lines. At LaGuardia Airport, ABC News reported that both airport employees and flyers were confronted with “endless lines” on Sunday. At Terminal C, which houses Delta, passengers waited 90 minutes in security lines. A similar situation arose at the Seattle-Tacoma International Airport, which was already dealing with a TSA Agent shortage. Now, with additional agents calling in sick, lines have grown even longer.

So if you’re catching a flight anytime soon, be sure to leave your home a couple hours early and prepare for the possibility of longer than usual line.