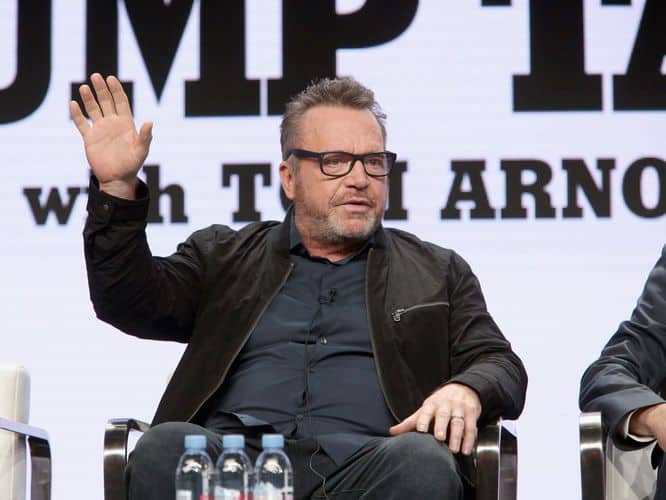 Tom Arnold, the comedian probably most famous for his supporting role in True Lies and being married to Roseanne Barr for a while in the ’90s, dropped by the 2018 Television Critics Association summer press tour this week to promote his new Viceland series The Hunt for the Trump Tapes With Tom Arnold, and readers, it was goddamn wild.

The show’s panel presentation was mostly a rambling stream-of-consciousness monologue from Arnold, who says he will continue to search for Trump tapes until the president resigns; it was peppered with moments where Arnold claimed to have seen or heard of or encountered proof of all manner of salacious information that perhaps wouldn’t end Trump’s presidency but would definitely lead to a week or two of embarrassing news cycles.

And, look, Arnold never purported to either have the actual footage in his possession or be in a place where he could legally show it on his television show. (Indeed, at one point, he suggested that any truly explosive, presidency-ending stuff would possibly be passed along to reputable journalists who could give it the love and care it required.) So to believe any of this, you have to decide how much you believe Tom Arnold, whose stated motivation for making the show is that he didn’t think a man like himself (a.k.a. older and a little bit foggy when it comes to details) should be president.

But he still tossed out so many wild non sequiturs about what he may or may not have on Trump, or may or may not have seen, that it was a little hard not to think, “Hey, if even one thing Tom Arnold claims is true, that could be a big deal, right?” And while I’m not ready to print a T-shirt that says “Tom Arnold Was Right” and quit my job to stand outside Rockefeller Center and make sure my T-shirt is prominently displayed every morning on the Today show until the sheeple listen to me, I’m also quite willing to admit that Tom Arnold randomly becoming part of the ongoing hunt for dirt that might end the Trump presidency makes as much sense as anything else that has happened since 2015, so why not?

Here are five of the wildest goddamn things Tom Arnold claimed during his TCA press conference.

Parsing Arnold’s comments was sort of difficult because his monologues were so mile-a-minute, but this is the most specific piece of footage he directly claims to have seen and had access to, and it sounds like it might have had something to do with the famed Apprentice outtake tapes that have been whispered about in Hollywood since the Access Hollywood tape briefly seemed like it might tank Trump’s campaign.

The tapes supposedly show Trump saying racist slurs, and Arnold claims he’s learned that Trump was pulled aside by Apprentice producers five separate times to say he was exhibiting behavior unacceptable on television, which the use of racial slurs would definitely fall under. (Arnold also says that Mark Burnett, the reality TV mogul and producer of The Apprentice, whom we’ll talk more about in a second, has a disk — though I’m guessing Arnold means a hard drive — with every Apprentice episode and outtake on it, which is almost certainly the case, but also good luck getting it, Tom.)

When asked by a reporter why it would take tapes of Trump saying the n-word to finally convince people that Trump is racist, when there’s plenty of reason to make that argument otherwise, Arnold minced few words: “It’s because white people are pussies.”

Tom Arnold doesn’t claim to have the pee tape. He doesn’t even claim to have seen the pee tape. But Tom Arnold says he has seen more than enough proof that he believes the pee tape — first spoken of in the famous Steele dossier as a piece of “kompromat” the Russians have on Trump, and which supposedly shows Trump and some prostitutes urinating on a bed the Obamas once slept in, and which Arnold calls the “peepee tape” — is real.

I am a pee tape skeptic, but I want nothing more than for Tom Arnold to bring it to the world if it exists. That feels like the best of all possible outcomes.

3) Mark Burnett could end the Trump presidency in a second, but he maybe might be compromised by Putin

For as much as Arnold’s show is called The Hunt for the Trump Tapes, he sure has plenty of ire to aim at Burnett, particularly because Burnett is heavily tied to the evangelical Christian community. (Arnold believes that if Burnett got up on the dais at a prayer breakfast to say that Trump is not a Christian, people would listen to him, which ignores all the times such declarations have been made within the evangelical church by literal pastors and other spiritual leaders, but maybe I’m underestimating evangelicals’ love of the producer of Survivor.)

Anyway, Arnold briefly floated the idea that because Burnett once tried to make a TV show with Vladimir Putin in 2001 — a project that Arnold erroneously claimed had actually progressed to being a real TV show — Burnett could also be compromised by Putin and is possibly the missing link in the long chain of espionage linking Trump to the Russian president.

4) Tom Arnold had the Michael Cohen tape before CNN

There’s Twitter proof that Arnold has met with Trump’s longtime lawyer Michael Cohen, and he also claims that he put CNN in touch with Cohen indirectly. My assumption is that CNN had other means of contacting Cohen, and that presenting himself as a valuable go-between is just Arnold’s way of buttressing himself against a TV show that might not feature any actual revelations, but will instead turn out to be a portrait of a man driven to madness by his own inability to cope with admittedly maddening times. And that could be fun and all, but it also wouldn’t exactly be “bringing down the presidency” levels of earth-shattering. So if Arnold can just say he had all the Cohen tapes before anyone else in the media did, that could be just the ticket to deflect from an ultimately disappointing TV show, right?

5) In the wake of the Helsinki summit, lots of people very close to Trump have been contacting Tom Arnold to share information with him and tease tapes, and that will surely be how this whole thing ends: with a comedian and former TV star airing a reality show that ends a presidency that began on a reality show, a move that would also be a fitting capstone to baby boomers’ longstanding relationship with television, a medium that has guided them from childhood all the way into their older years

It would almost make sense as the ending of a book, really. If we weren’t living in a simulation yesterday, we certainly are now.

Or, rather, we will be once The Hunt for the Trump Tapes With Tom Arnold debuts on Viceland on September 18 and completely changes the course of history.

Vox Sentences: Twitter, Facebook, and Alex Jones convene on Capitol Hill
How Trump is helping the baby formula industry mislead moms about breastfeeding
Paid sick leave could be a deciding issue in November’s key House races
Trump tweeted he has no ties to Saudi Arabia. A Fox News account proved him wrong.
Retired Gen. Lloyd Austin reportedly chosen as the first Black person to lead the Pentagon
Mark Zuckerberg gave $75 million to a San Francisco hospital. The city wants to condemn him anyway.