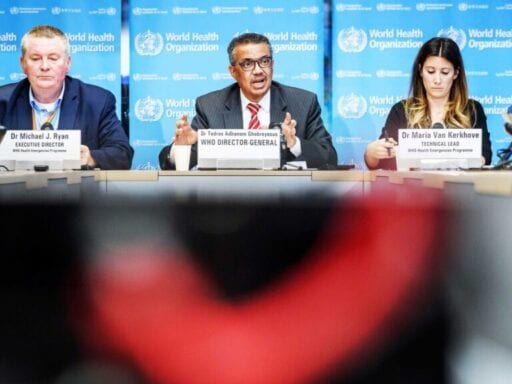 President Donald Trump has announced he will stop US financial support for the World Health Organization (WHO) in the middle of a disease outbreak that is undeniably global: As of April 15, there have been more than 2 million confirmed cases and nearly 130,000 deaths worldwide, according to the Johns Hopkins tracker.

The Trump administration is blaming the international organization for favoring China and making the coronavirus pandemic worse, while the president is trying to sidestep criticism of his own response to the outbreak. Questions have been raised about WHO’s handling of the pandemic, but Trump has come under fire for taking this action as the entire planet tries to fight the coronavirus.

In the United States, the number of confirmed coronavirus cases has risen to more than 610,000. New York City, the epicenter of the crisis, revised its death toll Tuesday to account for people who are presumed to have died at home from Covid-19 but weren’t tested. That revision led to nearly 4,000 more deaths being added to the total — and now, more than 10,000 people are said to have died of coronavirus in the city as of April 14.

On the economic front, there’s more grim news: US retailers reported the worst decline in sales in approximately three decades, showing just how much coronavirus has upended the country’s economy.

Trump puts WHO funding on hold

President Donald Trump is halting funds to the World Health Organization over what he claims are its failures in handling the coronavirus outbreak — Tuesday, he accused the global health institution of “severely mismanaging and covering up the spread of the coronavirus.”

Trump has also accused the WHO of pushing back on the US’s decision to close its borders to China in January. This is not exactly the case, however: The WHO didn’t criticize the US directly, instead issuing a statement that appealed to foreign countries not to take measures that might restrict international trade and travel.

According to the New York Times, the US currently provides about more than $500 million of WHO’s approximately $6 billion budget, which means the US pulling funds would be a huge blow to the organization that is trying to manage and coordinate this global pandemic, among other initiatives.

The World Health Organization has not been free of criticism during this pandemic, including whether it was too deferential to China at the start of the outbreak, and has faced questions over if it should have declared a global health emergency far earlier.

Trump, who’s been amping up his criticism of the WHO for more than a week now, has made these critiques himself. But he also seems to trying to pin the blame on the organization for the US’s own botched coronavirus response. However, the president’s critics argue he deserves the blame for the US coronavirus failings, particularly given that although Trump did close the US borders to China, he failed to use that time to ramp up US testing capabilities or acquire medical goods, forcing the US into lockdown to avoid overwhelming the healthcare system.

Public health experts and world leaders condemned Trump’s funding decision, arguing a global pandemic is not the time to undercut the WHO. Microsoft founder Bill Gates called cutting funding now “as dangerous as it sounds” in a tweet, adding that “the world needs WHO more than ever.”

And UN Secretary General Antonio Guterres said in a statement that WHO must be supported, as it is absolutely critical to the world’s efforts to win the war against COVID-19.”

The WHO does not have a perfect track record on the coronavirus outbreak, but it’s also only as strong as the more than 190 countries that belong to and invest in it. Rather than empowering the WHO to coordinate a global response, countries, like the US, are instead turning inward. This could make it harder to bring coronavirus under control, as it’s going to take a massive international effort to stop the spread globally.

As the coronavirus pandemic engulfed New York, the city began to witness another alarming trend: an increase of people dying at home. A spokesperson for the New York City medical examiner’s office told Gothamist on April 7 that about 200 NYC residents were dying at home daily, compared to 20 to 25 a day before the coronavirus hit. And, frequently, those individuals were dying without a Covid-19 test, meaning they did not go into the city’s official death count for the coronavirus, even if they were suspected of having been infected.

The city later said it would change this policy, which was expected to dramatically increase New York’s death toll. It has. On Tuesday, the city included an additional 3,700 deaths in its official count, all people suspected to have died of Covid-19, but who did not test positive.

That has brought the city’s death toll past 10,000 on Tuesday. No other state, or city, in the US has come even close to that amount. Adding the suspected cases is not a perfect system, of course, but it may offer a clearer picture o coronavirus fatalities here, and in the rest of the country.

As ProPublica reported, New York City isn’t the only city with a spike in at-home deaths, and experts said such increases could stem from people who didn’t seek treatment or were told to stay home, and later died of coronavirus without getting test. But the rise in at-home deaths may also be a consequence of the country’s overwhelmed health system: people are declining to seek medical treatment for other problems, and so failing to get help that they might need.

US retailers have toughest month ever

The more economic date the US gets, the worse the situation seems to be. Retail sales declined in March by 8.7 percent, the Commerce Department said Wednesday. It is the largest-ever declined in retail spending since tracking began in 1992, and, it’s the worst month since the fall of 2008, during the Great Recession.

Basically, this means Americans aren’t buying things — not cars (a 25.6 decline) or clothes (retail sales are down 50.5 percent). Consumer spending is critical to the US economy, but many Americans are staying at home, or losing their jobs, or fearful of losing their jobs — all of which means the ability, need, or even desire to go out and buy things isn’t there right now. And, considering a lot of the US’s most stringent lockdown measures didn’t go into effect until mid-March, the picture is expected to be even worse in April.

As Vox’s Matthew Yglesias explained, this is why simply opening up the economy — a strategy recommended by some of Trump’s advisers — isn’t a quick fix, as it “doesn’t change the fact that people with falling incomes aren’t going to go make major purchases.”

The public health crisis is intimately linked to the economic one, but they’re not identical, and Congress and the Federal Reserve have many options to bolster the economy — like sending money to state governments and doing additional rounds of direct financial transfers to households — even as the country waits for an improved situation.

As Vox’s Brian Resnick wrote in a beautiful story about plant resilience, “life yearns for more.” Or, as Ian, Jeff Goldblum’s character put it in Jurassic Park, “life finds a way.”

And with many stuck in quarantine, wildlife, at least is finding a way. This is true in places like Yosemite National Park in California, where coyotes, bears, and bobcats are making a comeback now that the human tourists can’t bother them. Park officials said this often happens when the park is closed during government shutdowns, but this is something different altogether. The park has been closed since March 20 because of coronavirus, and it may end up being the longest closure yet.

“The bear population has quadrupled,” Dane Peterson, who works at in the park, told the Los Angeles Times. He said bears, bobcats, coyotes are always around, but they “usually hang back at the edges, or move in the shadows.”

This isn’t the only place where life has found a way; Venice saw clear canals and fish once the cruise ships and traffic stopped because of the coronavirus. Goats took over the Welsh town of Llandudno. Even the rats are taking over, which actually … let’s draw the line somewhere, this is a bad thing. Plus, it might not actually be good for the rats.

But it’s nice to give the animal kingdom a bit of a vacation from us humans. And maybe we should think about that a bit more, when we do head out into the world, eventually. Except the rats. I do not want to face the rat army that wins the “rat battle” for the territory on the New York City subway.

The metamorphosis of Jeff Bezos is complete
Newsmax just canceled MyPillow’s Mike Lindell live on air
Cities are considering safe injection sites. A federal judge just said they’re legal.
Most candidates run to the center in the general. Biden is moving left.
The LA teachers strike may be over. Here’s the tentative deal.
Georgia’s Republican secretary of state has now certified Biden’s win