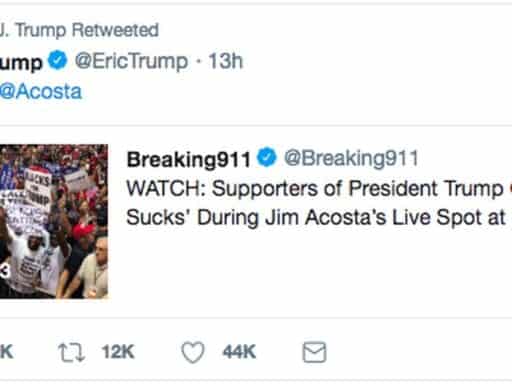 One of the most chilling aspects of the Trump presidency for anyone with a baseline familiarity with history is the way his rhetoric has whipped up crowds at his rallies. The “lock her up” chants against Hillary Clinton, the time a protester was beaten at a campaign event and Trump offered to pay the attacker’s medical bills, the president threatening to “gently” DNA-test Sen. Elizabeth Warren — all of it is cheered by his audience.

The atmosphere had gotten so toxic that at a Tuesday night rally in Tampa, Florida, the president didn’t even need to encourage his crowd. Before his speech, large numbers of audience members harassed CNN reporter Jim Acosta while he was trying to cover the rally — crowding around him threateningly, giving him the middle finger, and leading chants of “CNN sucks.”

And then on Wednesday morning, President Trump signaled his approval of this, by retweeting his son Eric’s praise of the harassment:

Here’s the video of the anti-media chanting that both Trumps seemed to approve of so much.

This isn’t a matter of Trump violating some abstract, airy-fairy “democratic norms.” This is the president whipping up hatred of the media in tweets and public appearances, watching it blossom into a reporter becoming a target of hate at one of his rallies, and then expressing his satisfaction with how his supporters are acting on his messages.

This is not the way leaders of a democratic country are supposed to behave. Yet so far, Trump has pretty much been rewarded for it.