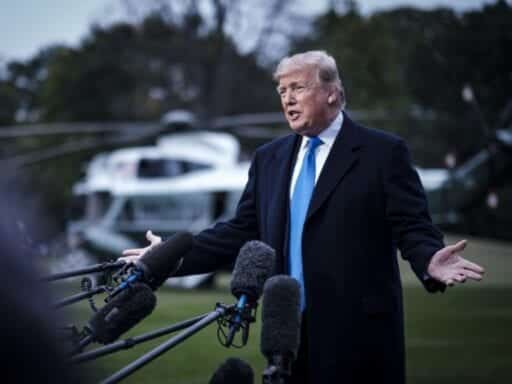 Imagine how he’d act if the crisis were worse.

President Donald Trump has had multiple chances to unite the country on the day authorities detained a suspected pipe bomb maker who targeted prominent Democrats and CNN. Trump has passed on all of them — choosing instead to continue criticizing Democrats and the media.

Once again, he has proven to be completely incapable of providing sober, mature, responsible leadership in a time of crisis.

After initially calling for “unity” in scripted remarks on Friday, the president turned his appearance at the White House’s Young Black Leadership Summit into a campaign rally.

He did his usual thing: He slammed Democrats, bashed the “fake news” media, and lambasted so-called “globalists.” Never mind that most of the bomber’s targets were top Democratic politicians, including former President Barack Obama and former Secretary of State Hillary Clinton, and that one was CNN, one of Trump’s favorite targets for the “fake news” label.

But that’s not all. Hours later, while speaking to reporters before heading to an actual campaign rally, he made four stunning statements that show just how badly he’s failing in his most basic presidential duties right now.

First, while he acknowledged that the bomber was “a person that preferred me over others,” he said that left-leaning Americans pull off heinous crimes too. He specifically referred to the shooting of Republican lawmakers during a June 2017 congressional baseball practice. The attacker, who nearly mortally wounded Rep. Steve Scalise (R-LA), supported liberal Sen. Bernie Sanders (I-VT) and disliked Trump.

“If you look at what happened to Scalise, that was from a supporter of a different party,” Trump said. While he was right on the facts, that his first reaction was to immediately bring that up is striking. “You look at numerous of these incidents, they were supporters of others.”

Second, Trump proceeded to say he took no blame for his rhetoric, which repeatedly demonizes the news media: “Not at all, no. There is no blame. There is no anything,” he told reporters.

Trump, asked if his rhetoric is to blame for the bombings, replies, “Not at all, no. There is no blame. There is no anything.” (via CBS) pic.twitter.com/833hzPrxpV

Third, as if that weren’t enough, he made sure to take yet another swipe at reporters. Asked if he would commit to toning down his rhetoric for a few days, he responded, “Well, I think I’ve been toned down. I could really tone it up. Because as you know, the media has been incredibly unfair to me and to the Republican Party.”

CNN, one of Trump’s favorite media targets, received a pipe bomb in the mail. And yet just two days later, Trump is once again painting the media as the villain and the Republicans as the real victims. Supporters awaiting Trump at the rally he was on his way to in Charlotte, North Carolina, have reportedly already begun chanting, “CNN sucks!”

And finally, when asked if he would call Obama and Clinton — two of the bomber’s top targets — Trump said, “I think we’ll probably pass.” In other words, he doesn’t even want to do the bare minimum a president is expected to do here: speak with the people targeted by a terrifying bomb threat and tell them he’s happy they’re safe.

New polls show Democrats have a narrow path to a Senate majority
Sen. Steve Daines wins in Montana, a must-hold seat for Republicans
Claire Underwood bids Frank a ruthless goodbye in House of Cards’ final-season teaser
The Capitol rioters put themselves all over social media. Now the FBI is watching.
Congress takes up the fight for the future of the Postal Service
Social media companies are already losing the vaccine misinformation fight